Duesenburgs modified to be trucks (trucks weren't very common, inexpensive, and got better gas rationing than cars during wars) 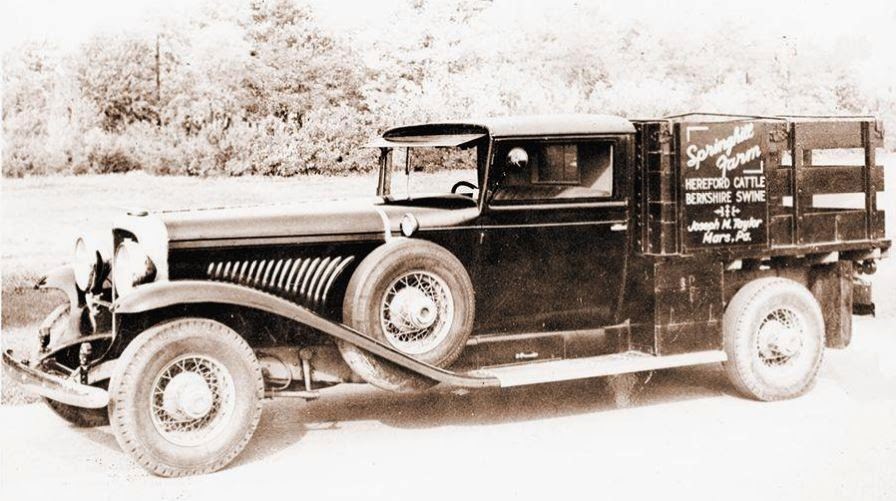 The top photo dating from 1924, which depicts a Duesenberg Model A that was presumably converted into a shop truck, as opposed to being built as a truck from the outset. With its bed railings, it resembles an early fire rescue truck or a police emergency squad, especially in New York City fashion. This Model A was a service vehicle, owned by the Duesenberg California Company, the local distributorship, located on Sunset Boulevard in Los Angeles. Jon said evidence indicates the auxiliary bodywork was installed by Beverly Auto Body Works, also of Los Angeles. Incidentally, last year at the Amelia Island Concours, one vehicle on the show field was a similar shop truck conversion based on a Rolls-Royce Silver Ghost. "Back then, Duesenberg was probably happy to get any kind of an order it could," Jon explained. "This one may have been shipped out west as a bare chassis, and then finished up at Beverly Auto Body. I'm not sure anybody knows the exact story behind what happened after that," conceding that after its useful life, the Duesenberg California may well have been resold or simply scrapped.

We can tell you a lot more about the "farm truck," if you will, that's depicted in the other image on the facing page. Duesenberg chassis J-350, chassis number 2370, both numbers-matching, rode on the long 153.5-inch wheelbase. It was originally fitted with limousine coachwork, like many of the long-wheelbase Model Js; in this case its body was furnished by Judkins. The car's ownership history from the A-C-D archives shows it then going to a gentleman named Joseph Taylor, who operated Springhill Farms in Mars, Pennsylvania, not far from where the American Austin was assembled in Butler. Taylor's farm specialized in Hereford cattle and Berkshire swine, the latter prized for its rich, marbled meat. It appears that Taylor cut off the Judkins bodywork aft of the chauffeur's seat, and then bolted a simple stake body to the rear chassis. The wheels are non-stock, reduced to 16 inches in diameter.

The exact time frame encompassing this Model J and its life is a little unclear, but the records show that after Taylor was done with it, it passed through four more owners, the last of whom, in Washington State, turned it back into a Full Classic. J-350 was retrofitted with a limousine body by Willoughby that was originally installed on J-237. The Judkins coachwork, or what was left of it, was lost.

"This kind of conversion (of a large luxury car into a truck) was fairly common when gas rationing was taking place. I don't think it was that common with Duesenbergs, though," Jon said. "This is the only one I've ever heard of that I know had this done to it. But you can see that the truck was very purposeful; it was built to work on a farm. It's difficult to skirt the issue about how people would have felt about it in wartime if he was bombing around town in a Duesenberg when everybody else was struggling with ration stamps. It's a fact that many Classics found themselves as derelicts, practically, on used car lots. To the best of our knowledge, there were 481 Model Js built and about 375 survive. Probably, since a Willoughby body went on [this] truck, it still exists."