you've heard that the railroad industry almost stopped, because of a union strike. Did you know why? The railroads wouldn't give employees some damn time off. Because? They laid off 45,000 workers 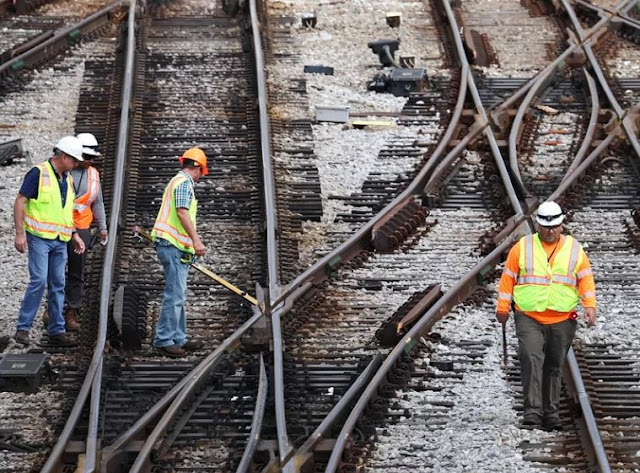 Freight railroads and the unions representing more than 100,000 rail workers have been negotiating a contract for several years. The stakes were high and a presidential emergency board appointed by President Biden recommended a compromise over the summer that would give workers a 24% increase in wages. Both sides — the unions and the railroad companies — had essentially agreed to the board's economic proposals.

But until early Thursday, standing in the way of a deal were the quality of life issues tied to an attendance policy so many workers hated.

The federal Surface Transportation Board Chair Martin Oberman testified in April 2022 that he'd raised red flags because the workforce had shrunk by 29% — or about 45,000 employees — over the last six years.

With a leaner workforce, rail workers describe difficulties in scheduling time off even for anticipated events. You can't count on getting your preferred holidays off, especially if you lack seniority. Even for other days, workers are often told they cannot have the day off because too many others have already requested it.

The points-based attendance system penalizes anyone who tries to circumvent the system by simply calling in sick on a day that they had requested off but were denied.

The system also ends up penalizing people who are actually sick or have emergencies or family matters to attend to.
https://www.npr.org/2022/09/14/1122918098/railroads-freight-rail-union-strike-train-workers
at Sunday, September 18, 2022

Vehicles:
http://justacarguy.tumblr.com
Beautiful women:
http://isonlyskindeep.tumblr.com
the best costumes and cosplayers from Comic Con SDCC, including Masquerade Ball
http://isurvivedthehallhline.blogspot.com/
and
http://isurvivedthehallhline.tumblr.com/
advice for my nephew at
http://uncles-advice.livejournal.com/
the best photography I've collected at
https://contentandcomposition.tumblr.com/
if you like reading, I'm putting together the best I've found in scrapbooks, anthologies, and poetry compilations
http://better-than-palgrave.blogspot.com
things done at home that make a significant visual or functional improvement
http://designandstyleathome.tumblr.com/
When I can find time, I'm going to put my best photos into a livejournal, the image size is enormous
http://justacarguy.livejournal.com//
And to show what an improvement a moment with photoshop 7 can do for old photos:
http://muchimproved.tumblr.com