scientists at the University of Texas turned to the vibroseis truck (Large Mobile Shaker) T-Rex truck to study earthquake tremors, as it can deliver 60,000 pounds of force to the ground 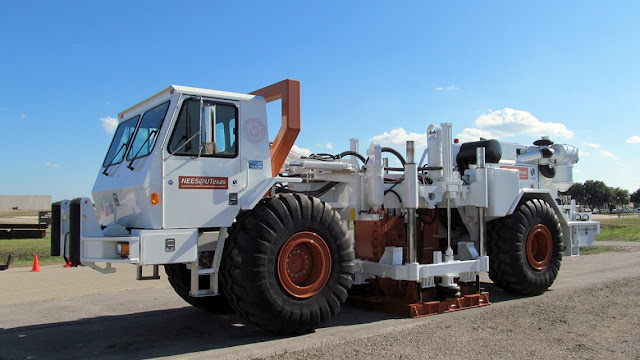 it delivers up to 27 metric tons (around 60,000 pounds) of impact to the ground at a rate of 30 times per second. That will certainly wake up the neighbors. Also, the Large Mobile Shaker has three modes of impact: vertical, horizontal, and transverse.
The mobile acoustic energy source vehicle belongs to the University of Texas’ Natural Hazards Engineering Research Infrastructure.
Cornell Engineering conducted geological characterization in 2018 of rock formations under campus and adjacent land to establish baseline seismicity, as part of the university’s study of Earth Source Heat (ESH), a proposed enhanced geothermal system to heat the Ithaca campus.
The rock’s reaction to the vibration will be recorded by approximately 400 geophones, or nodes, to be set up along the survey route from Sept. 16-19. The nodes will record the acoustic reflections from rock formations hundreds of feet below the surface, allowing researchers to infer critical details about subsurface conditions.

Computer processing can then use these recordings of reflected sound waves to make a picture of the subsurface. These images can reveal the geometry of the various rock layers, changes in their physical properties and whether they are disrupted by geological faults.

“It’s very similar to sonar in water,” said Larry Brown, the Sidney Kaufman Professor in Geophysics in the Department of Earth and Atmospheric Sciences. “Such information is critical to decisions about where and how to drill through these rocks, for any purpose.”
https://www.msn.com/en-us/news/technology/huge-t-rex-truck-in-texas-makes-artificial-earthquakes/ar-AA124QOB
https://news.cornell.edu/stories/2018/09/cornell-conduct-earth-source-heat-seismic-survey-sept-21-25
at Wednesday, September 21, 2022