good news, Princeton is going tuition free to students with family income under 100,000 dollars. Now, it won't be the tuition preventing students from getting an ivy league education, it will be the competition from all other applicants, for 1500 openings a year 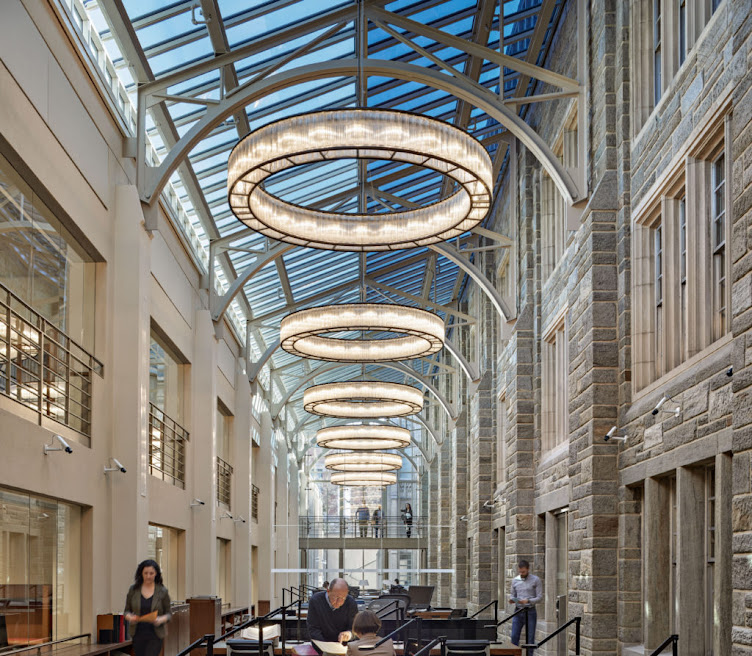 College Presidents Jonathan Dickinson and Aaron Burr, Sr donated their personal book collections to the (Princeton) University (then known as the College of New Jersey) in the 1740s.
In 1750, Governor Belcher donated 474 books to the school, which made the school's library collection the sixth-largest in the colonies. The library's first home was a second-floor room in Nassau Hall, which it shared for a time with the Continental Congress.
The library survived the Revolutionary War, but not a fire in 1802. Consequently, the school needed the help of donors to rebuild the collection, continuing the tradition that had started in the 1740s. It wasn't until the 1860s that the university deemed the library necessary for dedicated attention and funding.
President James McCosh came to Princeton in 1868 and, in his view, felt the library was inadequately supplied with books, and that it was insufficient for the library to be open for only one hour, once a week.

In 1873, Princeton hired its first full-time librarian, Frederick Vinton, who had previously worked at the Library of Congress. Two years later, in 1875, Princeton finished construction on Chancellor Green Library, the school's first dedicated library building. The university's growing collection of materials required the addition of the Pyne Library in 1897.
By the 1930s, the collection had grown to more than one million volumes rendering the Chancellor Green and Pyne library buildings insufficient. Thus, in 1948, the Harvey S. Firestone Memorial Library opened as the university's new primary library building; The university transferred nearly 1.5 million to the new Firestone Library from Pyne and Chancellor Green Halls.
https://theclio.com/entry/103949
Considered one of the largest open-stack libraries in existence, the Harvey S. Firestone Memorial Library functions as the main library on campus and assumes primary responsibility for the humanities and social sciences. The Harvey S. Firestone Memorial Library opened in 1948 as the first large American university library constructed after World War II.
The library building was expanded in 1971 and again in 1988 and currently has more than 70 miles (110 km) of bookshelves, making Firestone one of the largest open-stack libraries in existence.
https://mymodernmet.com/100k-princeton-free/
https://library.princeton.edu/firestone
https://www.brucebrooks.com/harvey-s-firestone-library/
I may be wrong, but the lights appear to be tire shaped.
I am bothered that I have been unable, in an hour, to learn why Firestone paid for a memorial library, that isn't going to mention him on a single website or webpage.
I did find that Firestone (the company or the family trust) transferred common stock of the company to the university to pay for the library
The New York Times article in 1983 only stated that the Firestone Library was constructed in 1948 with a gift from the Firestone family and later supplemented by additional gifts from the family and the Firestone Foundation.
then I finally found this: 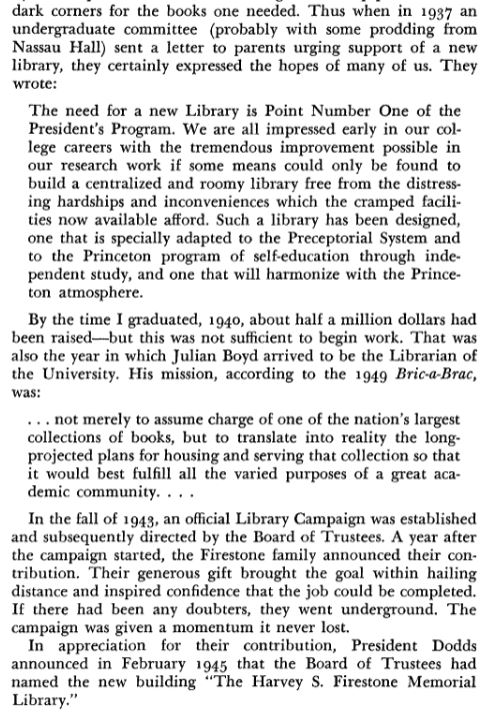 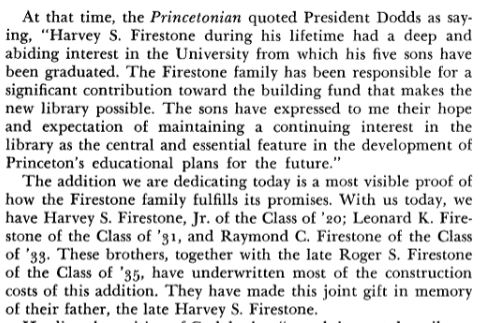 So, the 5 sons of Firestone all graduated from Princeton... finally, a reason why the library is named after the tire pioneer
https://www.jstor.org/stable/26409898?seq=3#metadata_info_tab_contents
I remembered that I looked up the amount of money the ivy league schools have on hand, in their endowments, back when I learned of the Ron McNair library
https://justacarguy.blogspot.com/2020/11/til-of-dr-ron-mcnair-astronaut-and.html
Dr Ron McNair was quite a great guy... his lifelong commitment was to continue his quest to inspire and encourage students to dream big, work hard and accomplish their goals.

If universities with enormous financial resources felt the same, ponder what the results could be if kids that wanted to get a great education might accomplish with it....