looks like a bit of abandoned rail road, which would be a good place to ride with a custom bike for riding rails, from County Rd DL to Devils Lake, and then on to the Wisconsin River, in Sauk City Wisconsin (90 miles West of Milwaukee)

the above sign says that this was a C and NW railway, which went bankrupt and was bought by Union Pacific 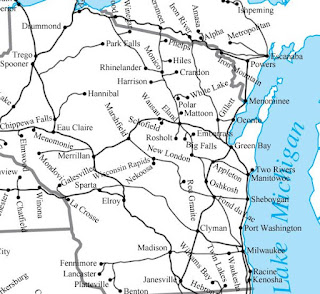 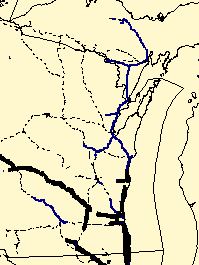 the blue lines are now owned by other railroads; dotted lines are abandoned.

and another leg goes to Baraboo from Sauk City, and this 140 year old stone bridge will likely outlast us all, on Halweg rd,  by Merrimac Town Hall 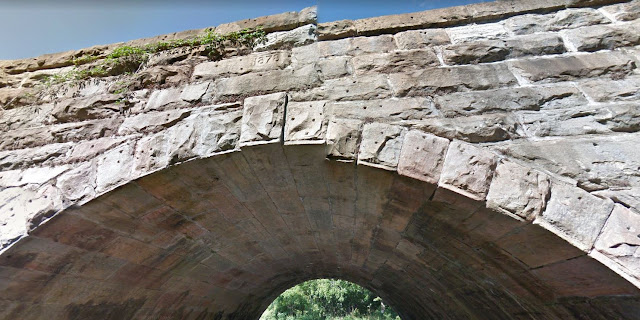 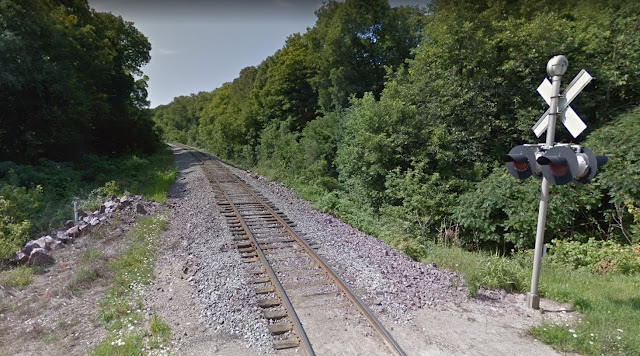 and out there in the middle of no where it looks like there used to be a military base or something like a town, which has little but old pieces of paved road left now 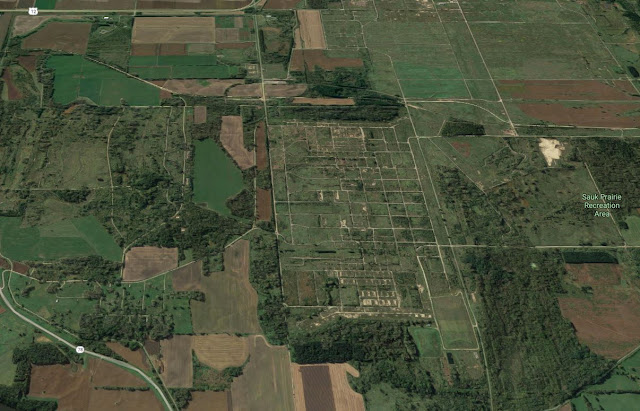 near Merrimac, but there's very much a lot of city grid pattern road, and nothing else

Huh, well, I got lucky in very little time,
"Sauk Prairie State Recreation Area was once designated as an army ammunition plant that manufactured nitrocellulose-based propellants during World War II, the Korean War and the Vietnam War. It was the largest munitions factory in the world during World War II. 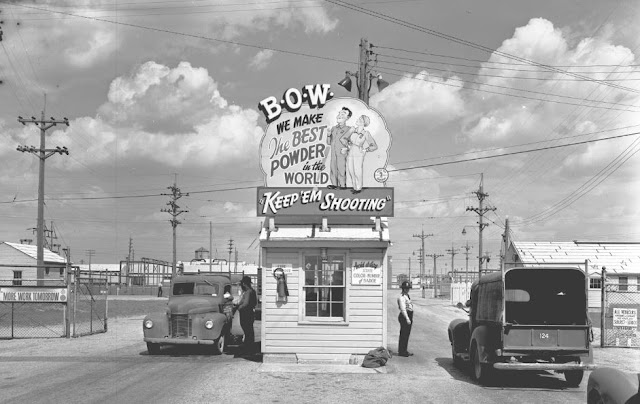 So.... "the largest munitions factory in the world during World War II" 100 miles West of Milwaukee
was known as the Badger Army Ammunition Plant 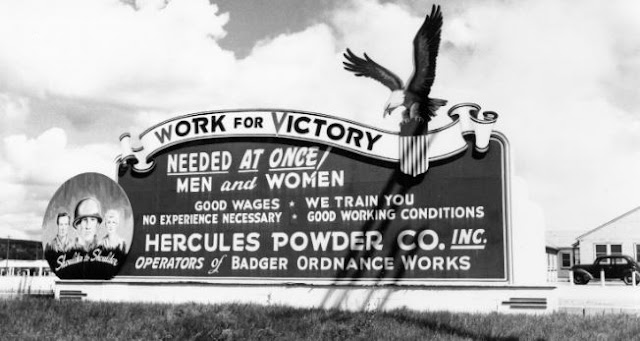 The plant was in production from 1943-1945 for WW II, from 1952-58 for the Korean War and early Cold War period, and from 1966-75 for the Vietnam War. 25,000 worked here on construction and production during WWII alone, with a maximum of about 6700 at one time—a population larger than the those of the nearby villages of Prairie du Sac and Sauk City combined. Women Ordnance Workers, nicknamed “WOWs”, were especially important during WWII, and they comprised about half the work force by the end of that war. 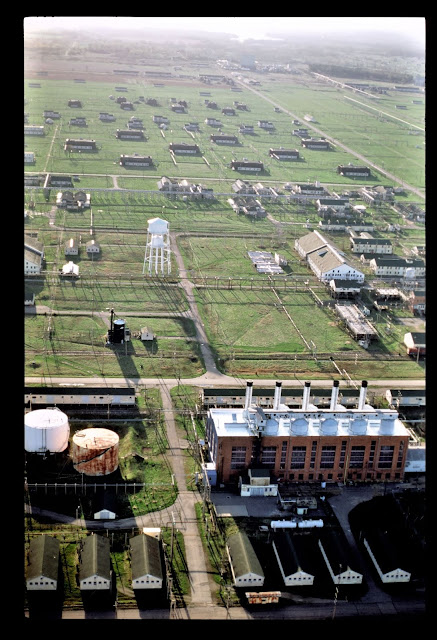 The bombing of Pearl Harbor in December 1941 brought the U.S. immediately into World War II. Within a few weeks, planning for construction of the Badger Ordnance Works (later Badger Army Ammunition Plant) on the Sauk Prairie began. Within several months, 74 farm families had been forced to move off their farmsteads, the farm buildings, churches and schools were moved or destroyed, and construction of the largest propellant factory in the country began in earnest. The Plant eventually encompassed 7,400 acres and contained over 1,400 buildings and more than 120 miles of road and rail. The Plant was idled but kept in a state of readiness from 1975 to 1998.

Safety was a critical issue here, and the security force guarded all entrances, checked employees as they arrived and left, and patrolled the interior and the perimeter roads by foot, car and motorcycle.

And there was an additional cadre of safety inspectors. Matches, lighters and smoking materials were strictly prohibited. Many are the cat-and-mouse stories of workers sneaking smokes, and some getting caught and fired, or disciplined for as little as a single overlooked match in the bottom of a purse.

Why was the ammo plant making gunpowder in Wisconsin?

The supply of wood pulp.

Cotton or wood pulp was combined with nitric and sulfuric acid to produce nitrocellulose, to begin the transition into propellant. With each production step the material was moved eastward to new buildings designed for the next process, which included mixing, hydrating, drying, wringing, heating, pressing, screening, rinsing, resting, and extruding and cutting strands of propellant. As the material moved eastward and became more explosive, the buildings took on features such as break-out doors, escape chutes, lamps that shown into windows from the outside, and bunkered barriers. The buildings also tended to be separated by more grassy space, so that if any building were to explode, it would not set off another.

Ball Powder was a double-base propellant. It began with nitrocellulose, made in the adjacent smokeless production area, and was augmented with highly explosive nitroglycerin, also produced at Badger.

During the Vietnam War, peaceful protests occurred at the front gate. The first was in 1966, when a group of 45 adults and children walked up from Madison. A less peaceful protest was made by the Armstrong brothers, who dropped ineffective, homemade bombs from a stolen airplane to the north of the front gate, on New Year’s Day 1970.

What they didn't know back then, was what the ammo plant pollution was doing to the ground water, and short story? It flowed to the Wisconsin River, and then South

The ammo plant was the origin of a plume of groundwater contaminated with chemical toxins and carcinogens, like carbon tetrachloride and dinitrotoluene, which have flowed south beyond the Plant, to residential wells and the Wisconsin River below the Prairie du Sac Dam. 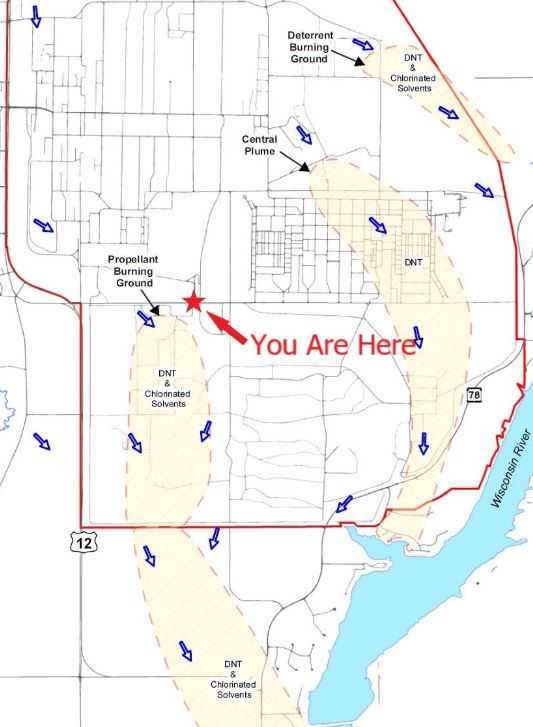 If you think that's strange, and unexpected, try looking up a local kook, Dr Evermor, and his mirror eye, and the Forevertron, and Memorial to the Munitions Workers of America. Hippie weirdness of course, taken to the extreme

The Forevertron was going to be the world’s largest scrap-metal sculpture, weighing in at 300 tons, incorporating such historic pieces as Thomas Edison dynamos from the 1880s, and the decontamination chamber from the Apollo 11 spacecraft. 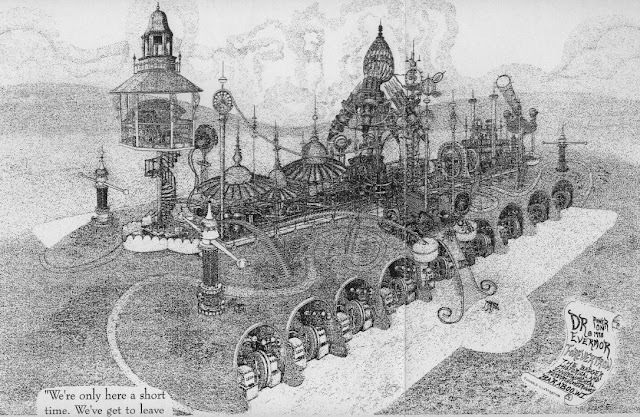 That's what happens when you drink the kool aid, and take the bad acid. So, don't do drugs.

When the Army announced in 1997 that the Badger Plant was to be decommissioned, a group of representatives from the area’s conservation community came together to discuss the opportunity for a “green future” to heal the land at Badger.

From the above satellite view, they failed. 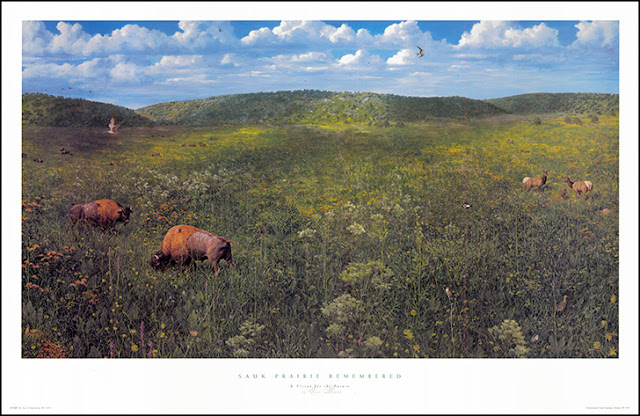 they wasted money on this painting through.  A painting by renowned artist Victor Bahktin, “Sauk Prairie Remembered” was commissioned to serve as the future vision of the Sauk Prairie Conservation Alliance for the land. There were many years of public planning of the Badger property, and then deconstruction of the buildings ensued from 2004 to 2013. Then, when the govt no longer funded anything, nothing was done. The artist died in 2016 https://www.savingcranes.org/victor-bakhtins-legacy/

as you can see if you click on these for full size, there appears to be some abandoned rail cars, and switch yards (below is next to the St Vincent DePaul) 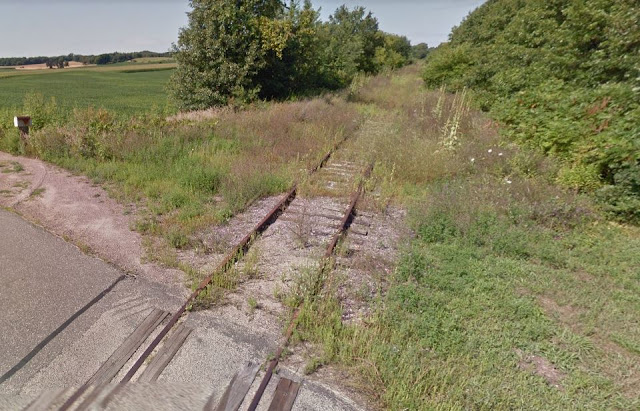 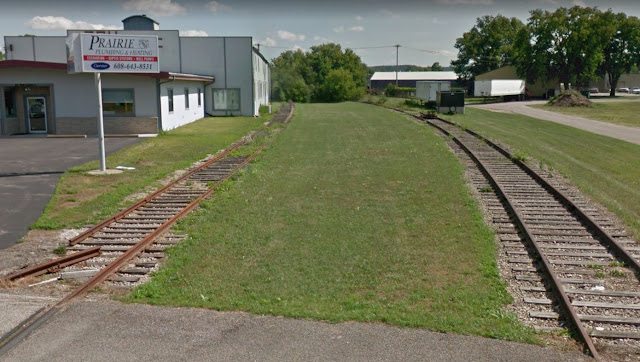 lower left corner is a good indicator that it's not just abandoned, it's ignored, and overgrown.

The CNW was known for running on the left-hand side when running on double track mainlines. In the United States, most railroads used the right-hand track along double-track mainlines, while left-hand running was more common in countries where British companies built the railroads.

According to a display in the Lake Forest station, the reason for this was a combination of chance and inertia. When originally built as single-line trackage, the CNW arbitrarily placed its stations on the left-hand side of the tracks (when headed inbound toward Chicago). Later, when a second track was added, it was placed on the side away from the stations so as not to force them to relocate.

Since most passengers waiting at the stations were headed toward Chicago, the inbound track remained the one closest to the station platforms. The expense of reconfiguring signals and switches has prevented a conversion to right-hand operation ever since. 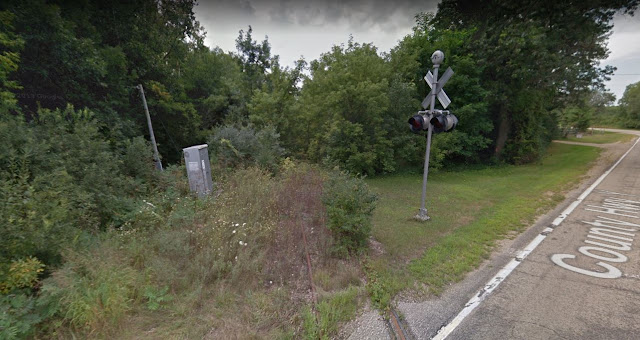 Might be getting made into the Great Sauk Trail, piece by piece, mile by mile 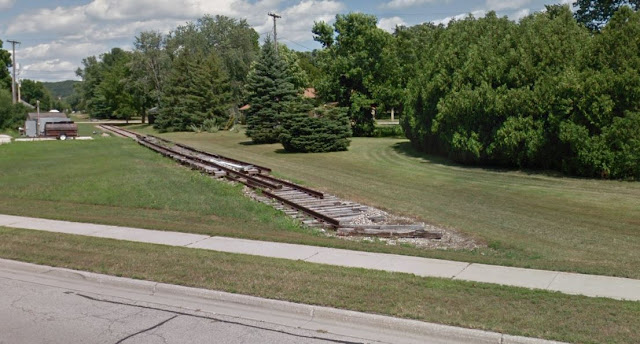 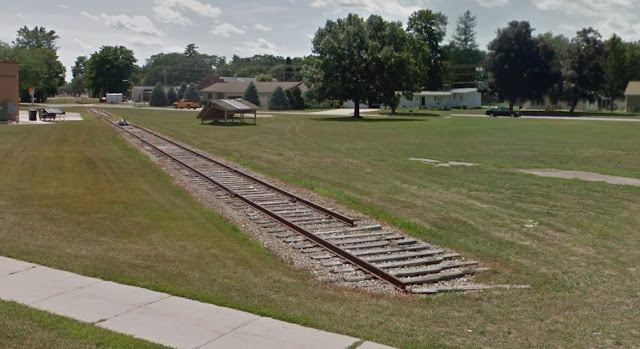 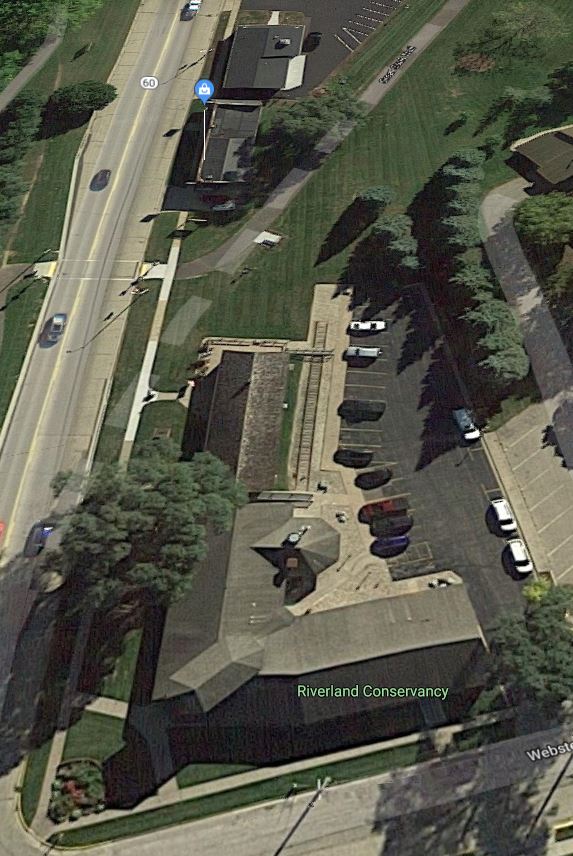 and in the above image, upper left, you can see the Great Sauk Trail come from the upper right of the image, down to the left, cross the road, and then it is a nice biking trail along the river 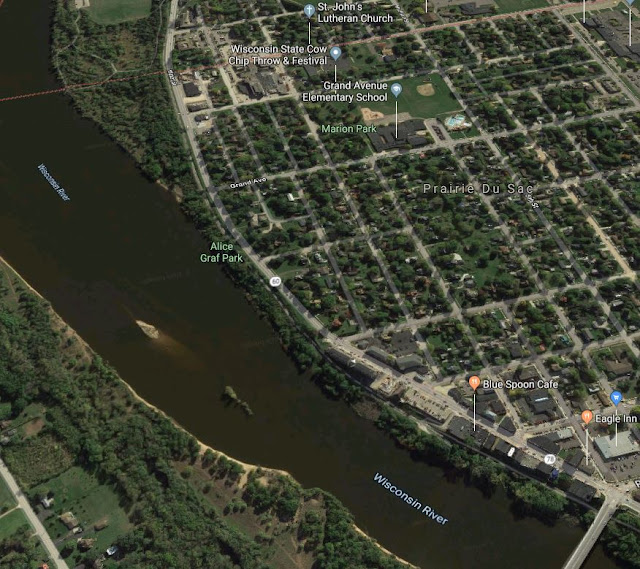 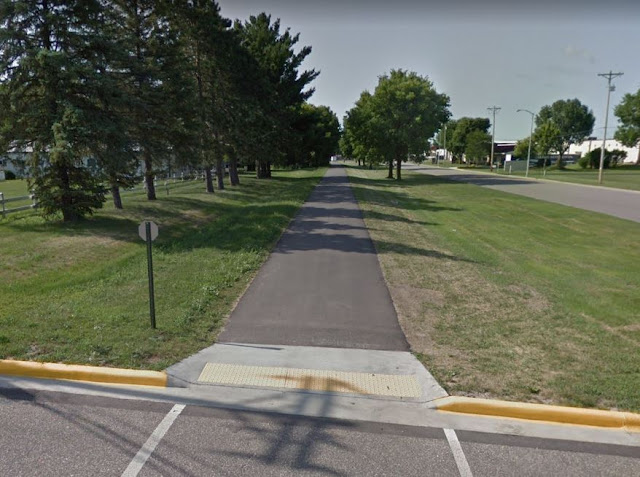 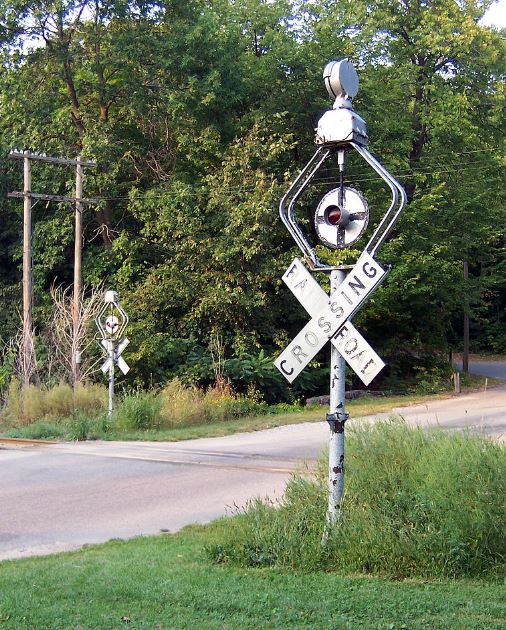 one of the many historical items of interest are the few Center Harp Shorties wig wags, iconically and nearly only used on the CNW, they were deemed unable to do the job by the feds in 1949, but rarely were replaced and often survived until the 70s, and a couple are still out there in the far abandoned places where no one goes anymore 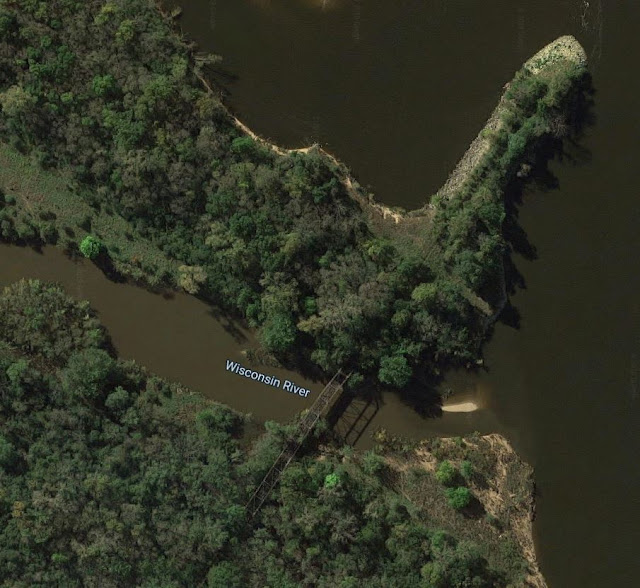 here you can see that the line dead ends on an isthmus, where the bridge was torn down over the river 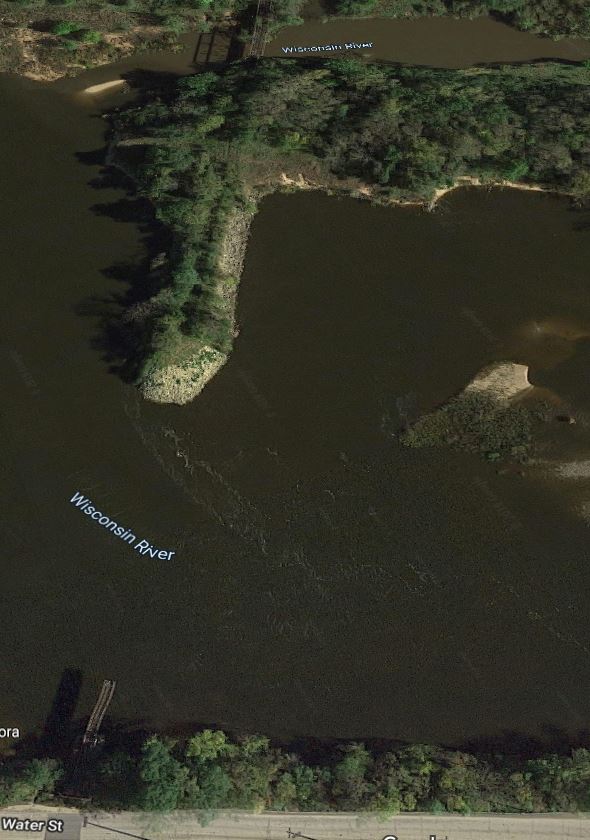 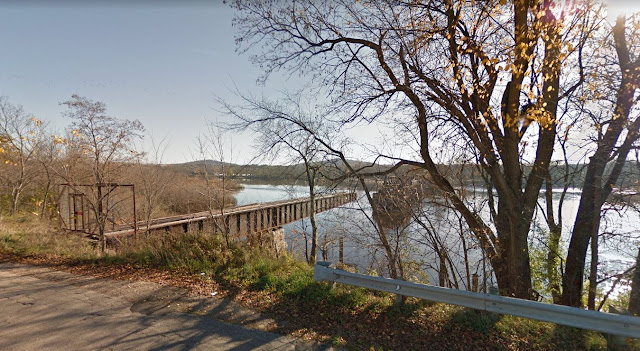 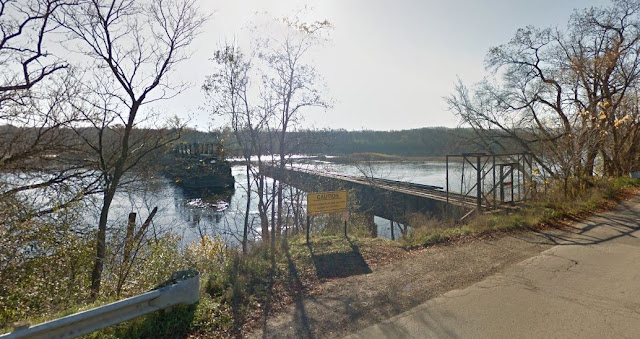 on the far side of the river, is what's left of the bridge 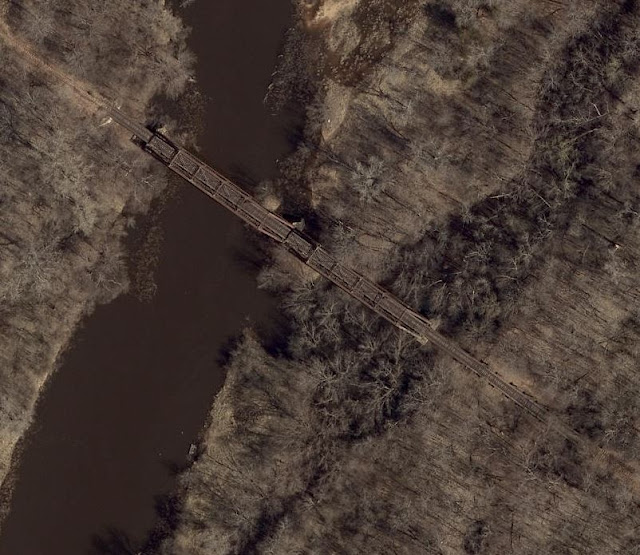 The railroad operated what was once the largest "potato yard" or potato market, at its Chicago Wood Street yards. Potatoes came to the yard from every point in the United States to be bought or traded by produce dealers and brokers.


A couple significant and historically important employees of the CNW were
Charles Ingalls, father of Laura Ingalls Wilder,  William B. Ogden, the first mayor of Chicago and  Abe Saperstein, founder of the Harlem Globetrotters.

and here I thought the most interesting thing I'd post all day was that Harley was a bridge engineer, and some of his bridges might still exist for Harley Davidson motorcycles to drive over