an LA county sheriff's deputy who was subjected to harassment and retaliation from the Sheriff's dept, for pointing out the corruption and dishonesty in trainers' police reports and their reasons for stopping suspects was awarded $8.1 million by a jury today.

Rodriguez said outside the courtroom after the verdict that he always believed in his case, but was wary of what he called the "overwhelming resources" the county brought against him during trial, including multiple trial attorneys.

Rodriguez, who filed his lawsuit in October 2017, was assigned as a trainee at the Industry station in December 2013 after earlier stints in the county jails and as a bailiff in Compton Superior Court and the Edelman Children's Court in Monterey Park.

Rodriguez testified that his first two trainers at the Industry station, Joanne Arcos 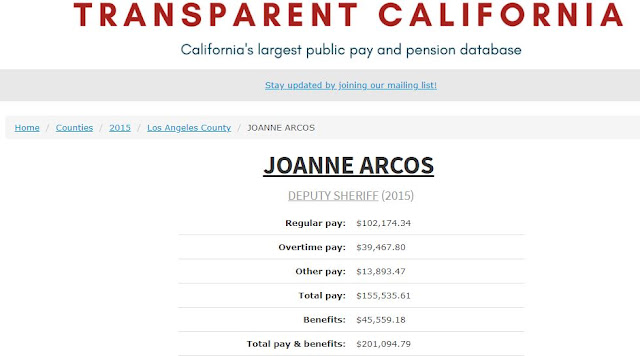 and Timmy Nakamura, engaged in what he believed were unconstitutional stops and detentions of potential suspects that could have led to both him and the trainers going to federal prison.

Rodriguez stated that current 2nd in command of the LA Sheriff's Dept, Undersheriff Timothy Murakami told him in August and September 2014 that he would "find something" to get the plaintiff fired.

Attorney Alan Romero, on behalf of Deputy Andrew Rodriguez, said during final arguments that the LASD spared no effort to make life difficult for the plaintiff.

"I can't imagine a case where so much time and resources were used to destroy a person's life," Romero said.

"This is a case about police corruption," added Romero, who told jurors that Murakami instigated an unwarranted investigation into Rodriguez when he was out on sick leave and deserves much of the blame for his client's difficulties.

Romero said some of the department witnesses were "coached" in their testimony and had no fear of being punished for any alleged misconduct on their part. He said they violated the oaths they took when they obtained their badges and when they took the witness stand.

"They knew they would get away with it," Romero said. "Most of the people actually got promoted."

Rodriguez has made himself a personal enemy of Murakami, testified that he knows if he returned to duty, he knows he'll be killed by the actions of the LA Sheriffs Dept, or the inaction if in a case where he needed police backup to handle non-police criminals, he wouldn't get any help at all.

What's non-police criminals? Opposite of the next two news stories of police who are criminals, ina  police gang that attacks other police, etc.

Two Los Angeles County deputies who say they were beaten and strangled to the point they believed they might die spoke exclusively to Eyewitness News.

"I knew I was losing consciousness. I knew that at the moment I was being overpowered. So I did feel like I was being killed," says one of the injured deputies.

In all, eight deputies are demanding $60 million in a new lawsuit against Los Angeles County and four fellow deputies they say are members of the "Banditos" deputy gang.

"We're hoping that the county and the Sheriff's Department finally changes, finally fixes what they admit has been a problem for 50 years," says their attorney Vincent Miller. "It's unbelievable to anyone on the outside that you'd have gang-member cops."

He pled guilty to lesser charges to avoid 3 years in prison for a felony count of conspiracy to obstruct justice and one misdemeanor count of obstruction of justice.

Smith admitted to having sex at two of the businesses between 2016 and 2017, prosecutors said. He claimed to be performing lawful business inspections at the time.

While assigned to Catalina Island in 2011, LA SD Deputy Cordero  claimed in a lawsuit against the county that he witnessed a Sheriff's Dept captain who escorted a county inmate to a golf course. The inmate was a former pro golfer, and he gave the captain golfing tips, the lawsuit said.