Captain George Eyston’s record-breaking car Speed of the Wind in London, 1935. Back when land speed record winning cars, were still cars, and could be driven on the roads and streets. They were not airplanes, or rockets, without wings. 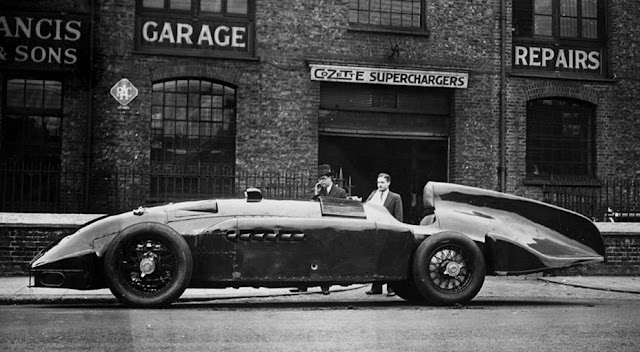 Cozette Superchargers, I've never heard of them, is the sign above the door

Between 1926 and 1954, Capt. George Eyston MC OBE broke dozens of speed records at Brooklands, Montlhery, Pendine Sands, and Bonneville, in cars ranging in size from 750cc M.G.'s to the 5,000 b.h.p. Thunderbolt.

In a lecture he delivered that month, Eyston described his built-for-speed Thunderbolt as having two 2,300-horsepower Rolls Royce motors geared together; the vehicle measured 35 feet long and weighed nearly 7 tons.

The engines were a pair of Rolls-Royce R-type V-12 aero engines, as previously used singly in Malcolm Campbell's Blue Bird of 1933. In fact, one of Eyston's spare engines for the record attempts was on loan from Campbell.

There were so few of these engines built (around 20) that many of them had illustrious careers over several different records. One of the Thunderbolt's had already powered the Schneider Trophy winner. 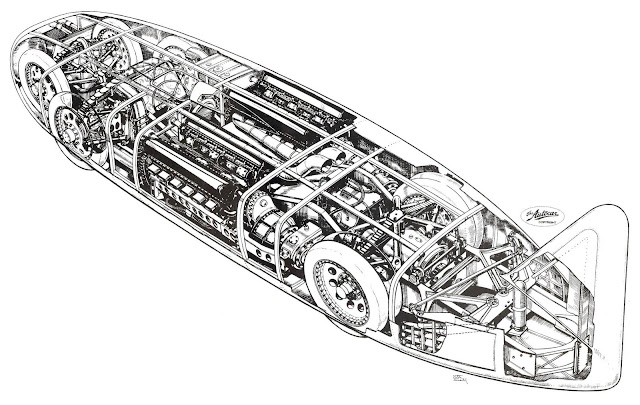 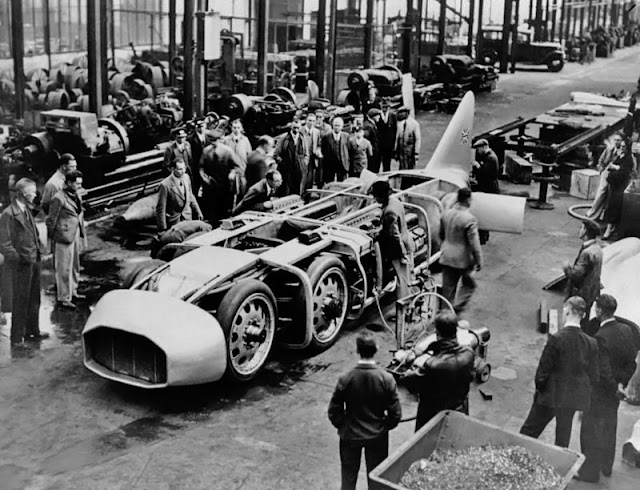 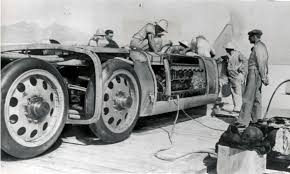 He will be remembered as among the most versatile and successful racing men of them all. In spite of a very busy life, George Eyston was the perfect gentleman, well-dressed, softly spoken and modest.

For relaxation, he was a sailor of Olympic class, an accomplished deep-sea angler, a distinguished oarsman, and a pilot.

He was not only a Chevalier of the Legion d'Honneur but he was awarded the OBE in 1948 and he was a Knight of the Sovereign Order of Malta.

After giving up active high-speed work Eyston master-minded record bids for MG at Utah until 1959. His last drive in anger had been in 1952, when he averaged nearly 121 m.p.h. for 12 hours in the unblown 1 1/2-litre MG EX179 - at the age of 57. Not only was Eyston responsible for much of the engineering that went into MG and other record-cars, including his own creations, but before that he had been Engineering Consultant to Chrysler, in the evolution of the "Super-Power" streamlined sports saloon, for instance.

He had been a pioneer in the diesel-engine record-car field, first with the 'bus-engined AEC, with Chrysler chassis, from which stemmed his special "Speed of the Wind" and "Flying Spray" exploits, using Ricardo-diesel and Rolls-Royce aero-engines. In many of his record bids little Bert Denly was Eyston's co-driver and off-duty they would go fishing together.