Shadi Mohammed is an extraordinary Iraqi mechanic in an unusual garage, everyone working on the vehicles are all women, and it's in Iraq 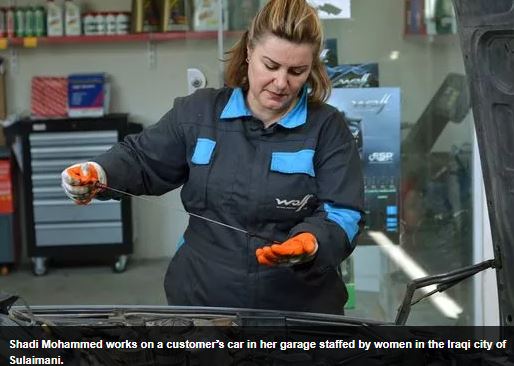 The charismatic businesswoman and former civil servant never planned to don overalls and transform herself into a mechanic. But as an economic crisis hits the Kurdish region of northern Iraq, where public sector wages have been slashed up to 75%, she needed a new way to provide for her family.

“When I realized this job had never been done by women before in Iraq, it encouraged me to go ahead with the idea of running an auto-repair garage,” Mohammed told USA TODAY on a blistering hot day. “I wanted to show that women could take care of themselves, and help encourage women to gain experience in this trade.”

She also wanted to create a garage where women would feel comfortable when they bring in their vehicle without facing ridicule or harassment from men.

Three months later, and $10,000 of savings spent, she said her business is doing well, and she regrets nothing.

Just 11% of women in Iraq's Kurdistan region were employed last year, compared to nearly 19% in the Middle East, according to the World Bank. Only one in 100 of those women had jobs in the private sector, where men and women are more likely to interact — something frowned upon in a country where traditional gender roles are still prevalent.

“Nobody has tried to stop me or close my garage, but neither has anyone or the government helped or assisted me with it,” she said. “Maybe they don’t want to lessen gender discrimination here.”