coolest thing I've seen in a while, built by the guys in the stuctures and electrical shop at VU 4, in the early 1950s, from a JD1 wing tank and drone parts. 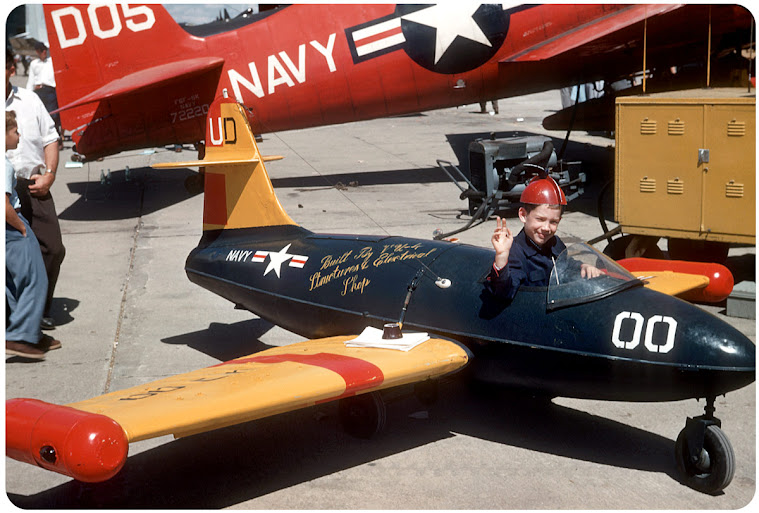 JD1s were versions of the A26
https://www.vpnavy.com/vu3_aircraft.html
Utility Squadron 4(VU-4) was stationed at NAS Oceana, Va. Beach, Va. and NAS Oceana, Va. Beach, Va, NAS Chincoteague, VA and NAS Norfolk, VA. and was considered a Sea Duty assignment
The VU-4 mission was to provide aerial target practice support for selected ships of the Atlantic Fleet in the Va. Capes area. Aircraft support partially involved 16 F8 Crusader aircraft modified for towing a bomb shaped styrofoam target with internal flares remotely activated by the pilot when on station. The pilot remotely deployed the target on a cable/winch assembly. The targets were painted red and approximately 3 to 4 ft. in size. Approximately one mile of wire cable could be deployed by the pilot via a motorized cable/winch assembly. Most of the time there was no target to recover. Typically daily almost 1/2 of the F8's would be in a non flyable status due to various hydraulic and electrical issues. The F8s had no exterior paint modifications or special markings. Towing these targets had special dangers. I recall one aircraft from VF-102 after shooting a Sidewinder missile at the target forgot where he was and sliced through the wire cable. Fortunately his aircraft damage occurred near the end of one of his wing tips and he was able to land safely. The F8 towing aircraft pilot felt only a slight momentary tug.

The other aircraft used by VU-4(V=heavier than air and U=Utility) were 3 WWII B26 Army bombers modified for target towing capability.  In the photo taken in 1962 at San Juan Naval Air Station when the squadron had a detachment TDY to support Operation Springboard, an annual exercise, the two "bubble" windows were used by the cable/winch operator to view whatever he could subsequent releasing or rewinding the wire cable.

Usually after a ship's firing practice there was not anything left of the red sleeve target cloth target. This was because in addition to tracking the cloth sleeve target visually, the ship's guns used radar tracking and after the target was destroyed continued to track the wire cable destroying whatever piece. Rarely was a mile's length of cable rewound in the aircraft. This was an extremely dangerous situation for the aircraft and involved frantic radio comms to the ship to stop firing.

Unseen under the aircraft is a small entry/exit area for the cable/winch operator. The cable/winch operator had to open the bottom area of his compartment to enter/exit the aircraft and for operating the winch/cable/target assembly. He had very little maneuvering room for movement and if not careful he literally could fall through the open area. The operator did not wear a parachute nor did the pilots.

What was very scary was the 3 B26 aircraft assigned to VU-4 had their operational "lives" extended three times when I joined the squadron in 1961. This meant the B26s should have been flown to Litchfield Park, Arizona for parts/disposal years ago. The problem was the Navy no replacement aircraft that could do that unique mission until the mid-60s when several S2F sub tracker aircraft were modified for target towing and Utility Squadrons were decommissioned and Composite Squadrons created.