CJ Hart was ticketed at the age of 87 for driving his motorhome 85 in a 55 zone.

Cloyce Roller Hart was born in Ohio, in 1911. His mother died within days of his birth, and his father gave him to neighbors to rear.

He ran away at 13 to travel with the circus and it wasn't until age 18, that Hart found out his real identity when the police checked his records after arresting him for running a still for making moonshine.

Hart tried to join the Navy in 1941 but was rejected because his lungs had been damaged as a boy when he had been run over by a wagon.

He went to work for Ford making engines, then moved his family to Santa Ana in 1944 working in a Ford dealership, then opened his own gas station. He became known for hopping up little Fords with flathead engines so the police could not catch them. 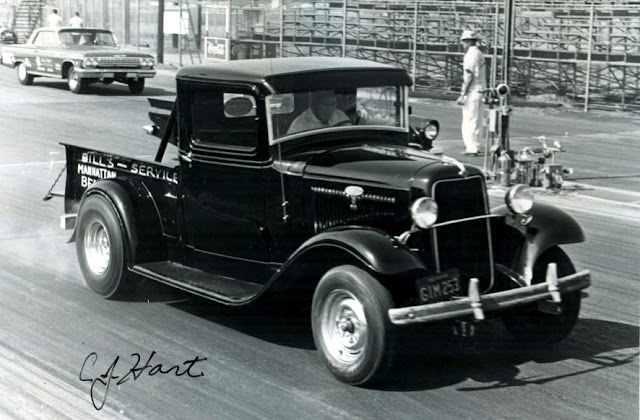 While running drag strips, you might not know he took over for Mickey Thompson running Lions, then worked at Riverside, Taft and OCR...  he pioneered roller starters, and though some strips used a car engine to power the rollers, Hart used electricity, and pioneered spraying resin on the track for traction