Sam Schmidt wanted to drive a car again, Arrow Electronics wanted to get the word out about their Value Added to Life department, and Pikes Peak just sat there as a challenge to them both (thanks Steve!) 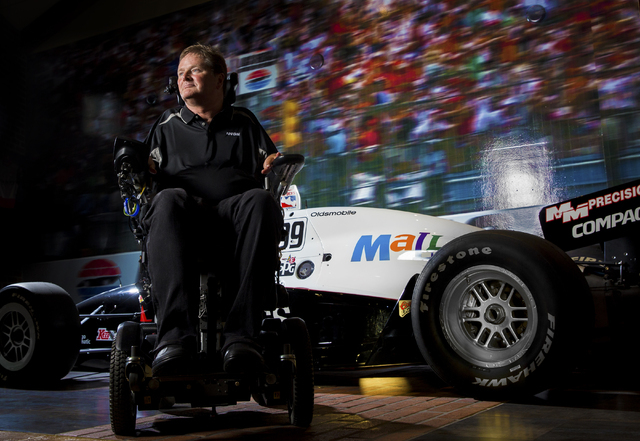 Sam Schmidt once raced in the Indianapolis 500. He raced in the big one three times before a testing accident at Walt Disney World, of all places, rendered him a quadriplegic.

Schmidt is paralyzed from the chest down. He’s been in the chair for 17 years.

He will steer his car, the specially equipped No. 5 Arrow Electronics Corvette, by turning his head to and fro, activating sensors in his hat. He will speed up and slow down by blowing and sucking through a tube.

That was the inspiration behind the SAM Project, and the SAM car.

SAM is an acronym for Semi-Autonomous Motorcar. It’s also short for Samuel. That its driver has the same first name was not a coincidence.

Arrow Electronics is a Fortune 500 company with headquarters in Centennial, Colorado. It has around 17,000 employees and annual revenue of $23 billion. It specializes in distribution and value added services relating to electronic components and products such as computers. It has an aerospace and defense division, and other divisions.

But it was the value-added services that brought Sam Schmidt and Arrow together. Schmidt has a foundation that supports a brain and spinal injury facility at Craig Hospital in Englewood, Colorado, of which the Arrow company also is a benefactor.

The Arrow company provides value-added services for these Las Vegans, and for other injury victims who are sent to Colorado for treatment, rehabilitation and therapy.