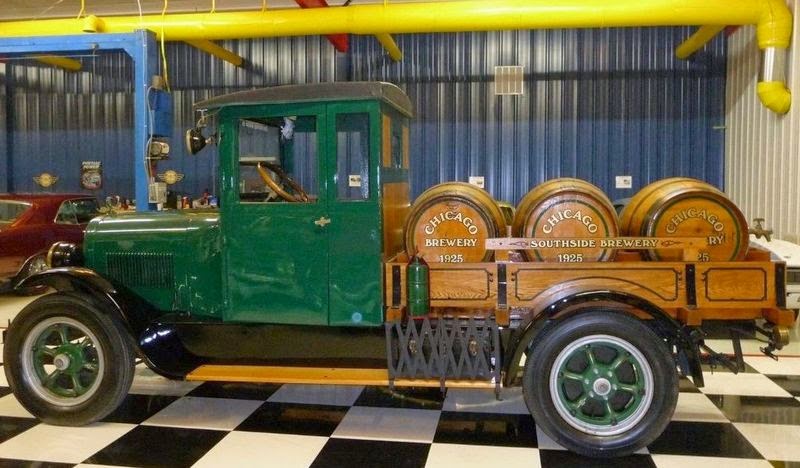 In celebration of the 100th anniversary of the Dodge brand, the AutoFair Nationwide Showcase Pavilion will be home to a display featuring vehicles from each decade of production, including this 1923 Dodge/Graham truck.

CONCORD, N.C. (Feb. 26, 2015) – Started by two brothers who loved building cars, Dodge is now one of America’s oldest automotive institutions, with a history of performance, innovation and milestones that will be celebrated with a special display at Charlotte Motor Speedway’s April 9-12 AutoFair.

To commemorate the 100th anniversary of the Dodge brand, AutoFair’s Nationwide Showcase Pavilion will be home to more than a dozen historic models representing each decade the manufacturer has been in production. A 1923 Dodge/Graham truck, 1951 Power Wagon, 1996 Viper and a replica of the famous 1969 “General Lee” Dodge Charger from the “Dukes of Hazzard” television series will be among the featured vehicles.

In 1902, Ransom Eli Olds—founder of Oldsmobile and the first automaker to use an assembly line—hired the Dodge boys to produce engines and transmissions for his hugely popular curved-dash model. Considering Oldsmobile represented 30 percent of the United States car market in 1903, the Dodge brothers profited nicely. Henry Ford, an engineer and race car builder with two auto company bankruptcies to his name, desperately needed the Dodge brothers’ cooperation, components and investment dollars to start Ford Motor Co., so he agreed to give them a 10 percent stake in his venture and a contract that would eventually make the Dodge brothers two of the richest men in America.

During the 15-year relationship, Ford wanted to build cars—especially his landmark Model T—as cheaply as possible, so he often ignored the Dodges’ suggestions for improvements. When the brothers ended their Ford contract in 1914, they turned their factory and resources toward building a medium-priced, high-quality car to be sold with a Dodge Bros. badge.

Their first self-named car rolled off the line Nov. 14, 1914, with a 35-horsepower four-cylinder engine, a 12-volt electrical system, and an all-steel touring body. It cost $785 (about $18,500 today), or $200 more than the cheapest Model T, but it was years ahead in engineering sophistication. Because of their reputation as smart businessmen, the brothers received 22,000 applications for Dodge dealerships before any cars were available to sell.

Dodge Bros. finished 1915, its first full year of sales, in third place for the U.S. market. That same season, the Dodge plant size tripled, the brothers built the first factory test track, and John Dodge drove one of their cars into a brick wall at 20 mph so the ever-curious brothers could see how their designs held up. The following year, the U.S. Army bought 150 Dodge Bros. cars for its new mechanized cavalry in Mexico, and an ad campaign for the company coined the word “dependability” to describe their machines.

There were countless racing victories and high-performance milestones, such as a fully realized aerodynamic race package (the 1968 Charger Daytona), the V-10 Viper sports car and the 2015 Challenger Hellcat, with a 707-horsepower Hemi V-8 that makes it the most powerful passenger car ever offered by an American automaker. These exciting developments are why it is one of only six American nameplates to reach the century mark (after Cadillac, Ford, Buick, Chevrolet and GMC).

http://www.charlottemotorspeedway.com/handler.cfm/template,photo_gallery/cat_id,44908?sf_id=7721  for the photo, and their press release for the info. For a similar post that shows a couple cool photos: http://justacarguy.blogspot.com/2015/01/a-bit-of-dodge-history-i-didnt-know.html

The AutoFair features more than 50 car club displays and more than 10,000 vendor spaces offering an array of automotive parts and memorabilia. More than 1,500 collectible vehicles of all makes and models will be available for sale in the car corral that rings the 1.5-mile superspeedway. In addition, up to 200 cars will be auctioned by Dealer Auctions Inc., and kids can enjoy face-painting, bounce houses, and other games and entertainment in the Play Zone. Hours for the April 9-12 AutoFair are 8 a.m. to 6 p.m., Thursday through Saturday, and 8 a.m. to 4 p.m., Sunday. Ticket prices are $10 per day for adults and children 13 and under are admitted free when accompanied by an adult. Get a weekend pass for just $30. Parking for the event is $5. http://www.charlottemotorspeedway.com/

The fastest accelerating machines on the planet return to the Bellagio of drag strips March 27-29 for the NHRA's only four-wide assault on the senses.