I was slightly familiar with the Mint 400, that it was a race in Nevada in the 60's or 70's sponsored by and as a publicity stunt by a casino, and that Steve McQueen, Parnelli Jones, Walker Evans, Ironman Stewart, Mickey Thompson, and the Unders had participated.

What I learned from this article was a LOT...

The casino occurred due to the fortune made by areal estate developer that got govt contracts, made a fortune with the Sun City Arizona development (which made the cover of Time Magazine for it's success), and with a couple partners... bought the New York Yankees.

In 1971 Hunter Thompson was sent by Sports Illustrated to cover the event, they then balked at the copy, and so Rolling Stone Magazine ran it... but the time in Vegas gave Hunter the material for "Fear and Loathing in Las Vegas"

in 1972 the promo and publicity were increased by getting women to model and strut in bikinis, Vanna White and Linda Carter were two of them 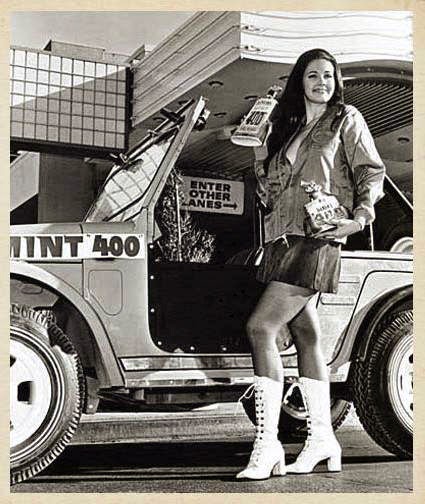