the chair force got busted screwing up.... on Martha's Vineyard, last Friday. Do you have any idea what the USAF needs a C130 on Martha's Vineyard to do? Pick up a motorcycle, a pre 1972 BMW, I shit you not. That's got to be a waste of about 100,000 dollars of taxpayer fuel, to airlift some flyboys sportbike

In fact, this particular Hercules came all the way from Keesler Air Force Base, Mississippi, where it is assigned to the 403rd Wing's 53rd Weather Reconnaissance Squadron.
"Leadership is aware of the incident, which is under investigation. Once the investigation is complete we will provide additional information."
What the crew of the 53rd was doing in the Martha's Vineyard area last week, is unknown. Losurdo said they were performing "an off-station training mission" before making "an unplanned stop," but did not share additional details.
Should we blame a crew member for making a quick pitstop to pick up their bike on the way back home? Yes. Take care of your business on your own time, on your own dime... and by the fact that the motorcycle was on Martha's Vineyard, the young idiot can AFFORD to get the motorcycle on their own, without using a god damn 4 engine Hercules.
A spokesperson with the 403rd Wing confirmed the incident, Lt. Col. Marnee Losurdo, the wing's Chief of Public Affairs, has to put up with the nonsense that the young idiots cause, and keep a straight face with the public when saying  "The crew picked up a motorcycle that belonged to one of the crew members,"
A social media post from Doug Ulwick, who was patronizing the Plane View Restaurant, described a “freakin’ huge” U.S. Air Force airplane landing, then that the plane dropped its cargo ramp, collected a motorcycle, and then immediately took off again. “Don’t see that everyday.”
The plane was at the airport “probably not more than 15 minutes,” Ulwick said.
Tristan Israel, a county commissioner, saw it too. He was at the Plane View eating lunch. “I saw a vintage BMW motorcycle. I used to own old vintage BMW motorcycles, so that’s how I know,” Israel told The Times. He guessed it was pre-1972, based on the logo.
https://boingboing.net/2022/03/31/potentially-unauthorized-use-of-a-usaf-c-130-hercules-to-move-a-motorcycle-across-country.html
https://www.mvtimes.com/2022/03/25/plane-motorcycle-mystery/
The 53rd Weather Reconnaissance Squadron, a component of the 403rd Wing located at Keesler Air Force Base in Biloxi, Miss., is a one-of-a-kind organization. It is the only operational unit in the world flying weather reconnaissance on a routine basis https://www.403wg.afrc.af.mil/About/Fact-Sheets/
https://www.facebook.com/403wing/ 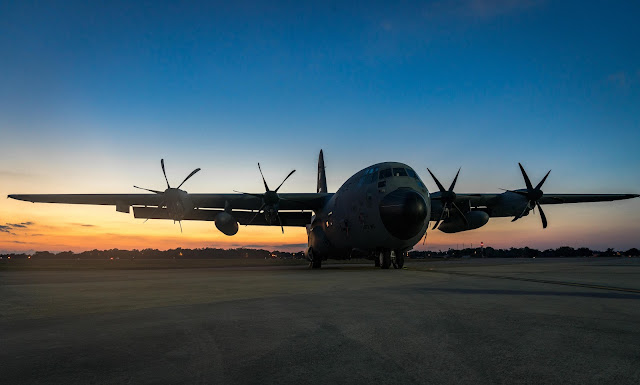 So, stopping on the island to get your vintage BMW bike... naturally. Might have ridden it there for a vacation, might have bought it from someone on EBay, maybe even inherited it.
But using a cargo plane belonging to the taxpayers to collect it? Not cool
at Thursday, March 31, 2022