smart way to get people to stop and look, they even had a light in the canopy at night. 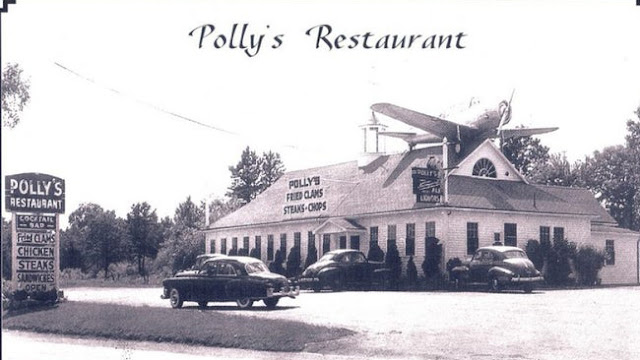 Polly’s Restaurant opened in 1941 as the Four Corners Restaurant, named after its location. “The Four Corners” at the intersection of Boston Rd and 110 is also known as Minot’s Corner, and is now the site of Cornerstone Square, a major shopping center. The location was colloquially named after Major Jonathan Minot, (1723-1806) was a Minuteman who lived on the corner of Boston Road and Route 110 in the 1700s, his descendants lived there until selling the home in the 1940s
This family’s house was removed and replaced by Polly’s, known for a WWII airplane on its roof. According to the Westford Gazetteer, two different planes were affixed throughout the establishment’s life.
Above is a possibly a T6. Below, it's replacement, was probably a mock up because the original was blown off by a hurricane, and by then, cheap army surplus planes were a lot harder to come by
The restaurant was originally owned and operated by Costa “Polly” Polesayka (1908-1998). By 1963, it was run by Domenic Del Papa (1917-1996). They had a dance floor and jukebox, and offered breakfasts, fried clams, hamburgers, and other meals common for diner establishments. Due to tax issues in 1964, the land was briefly taken by the town. The tax issues were resolved by 1967, the restaurant being sold to the business’ operator, Del Papa, that year. Polly’s was ultimately closed and sold to Mobil Oil by 1970, and replaced by the Mobil gas station presently at the site. 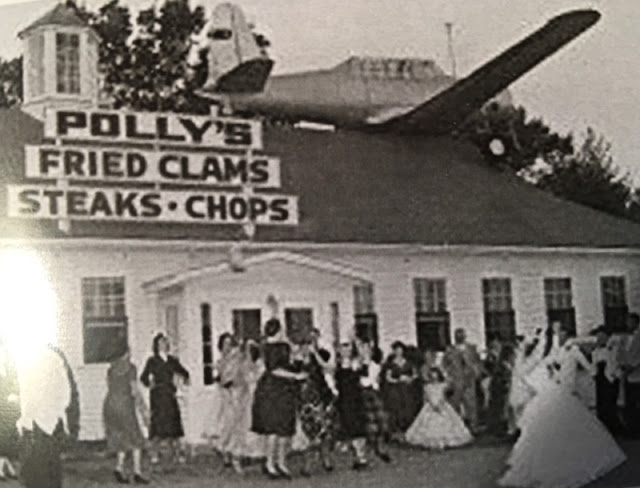