standing applause for Waldo Fidele! who observes every can in his garbage truck's surveillance camera as it gets dumped into the back, and saw a little kid... and saved that kids life by his professionalism and constant attention to duty 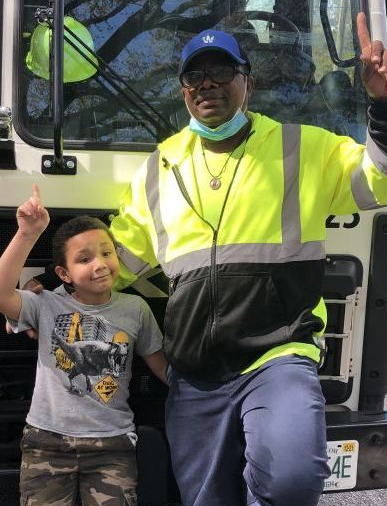 A 7-year-old Florida boy who was hiding inside a garbage can, is lucky to be alive after he was scooped up and dumped into a sanitation truck next to a trash compactor.

Elias Quezada escaped Tuesday’s petrifying ordeal without even a scratch, thanks to the very alert and heroic driver

Quezada was playing outside his grandmother’s home in Hillsborough County when he decided to climb in her trash can, he was soon scooped up and dumped into a sanitation truck as it collected trash in the neighborhood.

In a matter of seconds, Elias thought it was going to be “the end” for him.

“I got picked up and thrown to where I was going to be a mashed potato,” he said.

Fidele immediately turned off the truck’s blade and called 911.

But luckily for Elias, the driver was trained to observe every can in the truck’s surveillance camera as it gets dumped into the back. Waldo Fidele said he saw something drop and immediately turned off the truck’s blade. Fidele immediately called 911.