She was a 5 year old refugee when a man gave her a bicycle at a Dutch refugee center. 24 years later, she was able to thank him 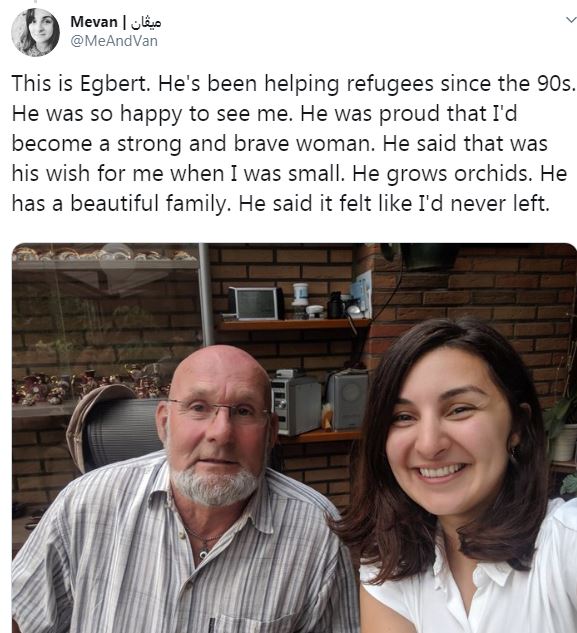 Mevan Babakar, a 29-year-old U.K. tech worker, had been reflecting on her childhood in a Dutch refugee camp when she stumbled upon a photo of a stranger who’d showed her an indelible kindness by gifting her with a shiny new red bike when she was in a refugee camp in Zwolle, Netherlands after escaping Iraq during the Gulf War 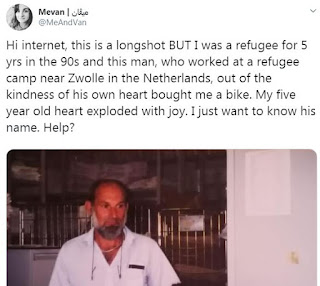 When she was five years old, Babakar and her Kurdish parents had fled their home and traveled through Turkey, Azerbaijan and Russia before they moved to London, where Babakar currently works.

On Monday, August 12th, Babakar tweeted the photo to her followers hoping to reunite with the unknown man.

Within 36 hours of her first tweet, Babakar found herself in Germany taking a new photograph with the man.

“Out of the kindness of his own heart (he) bought me a bike. My five-year-old heart exploded with joy. I just want to know his name,” Babakar wrote.


He had forgotten the red bicycle, but now that Mevan came with it, he knows where it must have come from. Bicycle dealer Koos in Balkbrug often delivered bicycles for Egbert Van Dijk's refugees.