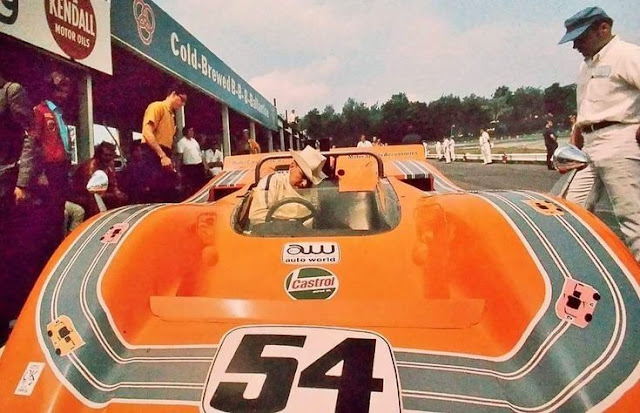 His M8B McLaren Can Am carwas criticized by the SCCA for it's paint scheme, as they had a rule limiting how much body space could be used for advertising.... he told them "it's just racing stripes"


Oscar Koveleski can be accurately described with two words – speed, and passion. His love of speed started early. As a youngster, Oscar had a passion for model cars and airplanes. He learned to fly at age 9, and at 18 he joined the Philadelphia Region of the SCCA.

His first win came in a 1951 SCCA Regional race at Bone Stadium in Pittston, Pennsylvania. He raced regularly through the 50s and 60s in SCCA Regional and National Races, as well as the 12 hours of Sebring and the 24 hours of Daytona.

in the Ferrari he bought from Andy Warhol

In 1970, he won the ASR National Championship at Road Atlanta, beating 27-time National Champion Jerry Hansen by just one-tenth of a second. From 1969 through 1972, Oscar was a regular competitor in SCCA Can-Am action, with his orange “Car 54” one of the most recognized cars in the series.

The PRDA van made one seven-minute fuel stop. The Ferrari consumed 240 gallons of fuel averaging 80 mph; the PRDA van used 356 gallons while traveling a slightly shorter route and averaging about 3 mph less. 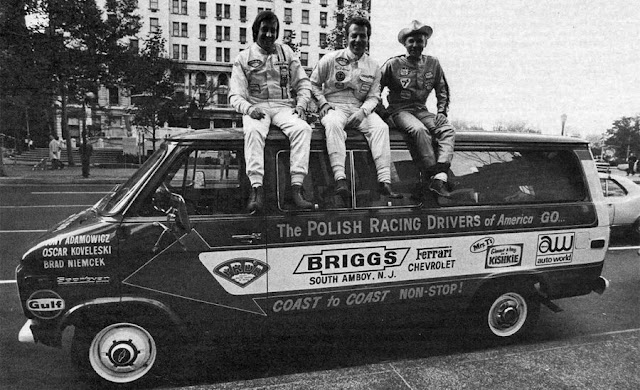 the 1st name on the front fender Tony Adamowicz, known affectionately as Tony A2Z, worked as a White House staffer for the Eisenhower, Kennedy and Johnson administrations when he suddenly got the urge to drive racing cars. His talent quickly became obvious – he won the Under 2.0-liter portion of the SCCA Trans Am championship in 1968. He also won a championship in Formula 5000 against world-class competition, and in a Ferrari 512, scored podium finishes in 24-hour contests at both Daytona and Le Mans.

Looking for a way to contribute to better safety for drivers, he joined the board of directors of the Motor Racing Safety Society. Oscar served on the Board of Directors for the SCCA, and promoted SCCA races at Pocono Raceway from 1980 to 1996.

Best known for creating Auto World in 1958, Oscar Koveleski became the man about slot cars, model cars, and radio control cars and remained so for over 30 years. He introduced a countless number of children to racing, both in person and through his mail order catalog that sold model and slot cars beginning in 1958. Oscar contributed to a love of cars and racing early in a child’s life, and many future racers got their start at home thanks to his Auto World catalog.

Labels: Can Am, Ferrari, SCCA racecar