teenage pilot Zara Rutherford is set to land her single-seater Shark sport aircraft today in Kortrijk, Belgium, more than 150 days after setting out to become the youngest woman to circumnavigate the world solo. 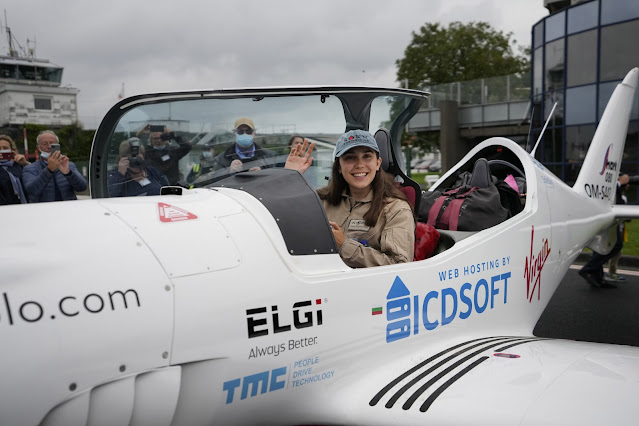 the Belgian-British teenager wants to infuse young women and girls worldwide with the spirit of aviation – and an enthusiasm for studies in the exact sciences, mathematics, engineering and technology.
Two mathematical statistics stand out for her – only 5 per cent of commercial pilots and 15 per cent of computer scientists are women.
https://www.journalgazette.net/news/world/20220117/19-year-old-on-verge-of-aviation-history
Frankly, it's a nice goal, but not realistic. Young people, regardless of XX or XY status, can't afford pilots training, planes, etc.
I get it, her parents are pilots, and that opened a lot of doors for her, and she gets the privilege of flying before she's of age to rent a car (in the USA, that is 25) drink a beer (in the USA that's 21) etc etc.
19 is young, and unless teens have rich parents, they aren't going to be very motivated to luxury fly for fun, or even have a credit score that will get them accepted by a credit card company so they can buy their own ticket on an airline (in the USA, you must pay by credit card, only, no cash).
I don't know how niave rich people are to use their wealth to push their luxury lifestyle hobbies into the public sphere, like the brass era car people, the sports car people, the vintage racing people, etc - who say "why aren't more kids interested in" - rich people hobbies.
I've seen Hagerty insurance try for over a decade to engage teens in concours judging, for example, and I've heard so many car people lament that young people aren't interested in racing, buying brass era horseless carriages, etc etc.
It's because those hobbies are not financially available, duh. Teens aren't getting hired at jobs that allow them to pay for car insurance, so, isn't it obvious?
Anyway, good for this young woman to have the chance to fly around the planet for 5 months, that must be cool, but to drum up interest in others? That's not likely. Teens haven't been able to afford airplanes since the WW1 surplus Jenny's were sold.
at Monday, January 17, 2022