Sometime in 1929 or 1930, John Deere set about to produce a system that would allow simple tread width adjustment on the “GP” without the use of tools, axle swapping or other extraneous parts 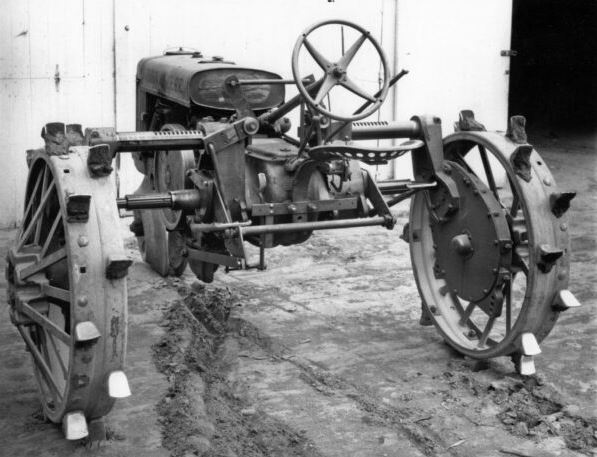 In 1928 John Deere released the model “GP” specifically aimed at the row crop market.
Then, much more than today, farmers used varying widths between the plants in their fields. While a certain width might have been custom for a certain crop in one area of the country, another width would have been standard in another area or for another crop.
Deere tried to appeal to all of the farmers it could with the “GP,” even producing a narrower version of the tractor specifically for potato farmers.
An ideal situation, though, would have been to have one tractor with tread width adjustable to the situation or the field at hand.
These tractors had telescoping driveshafts leading from the tractor’s transmission housing to the final drives at the wheels.
Support shafts above the driveshafts were notched. To adjust the tread of the tractor in or out, a ratchet system attached to the power lift on the “GP” was employed while running the tractor along the ground.
The driveshafts simply expanded or contracted as was necessary while the ratchet system moved the support shafts.
https://greenmagazine.com/john-deeres-lost-models-2
at Monday, November 29, 2021