excerpts from Motul's coverage of the 2018 Bonneville Speedweek 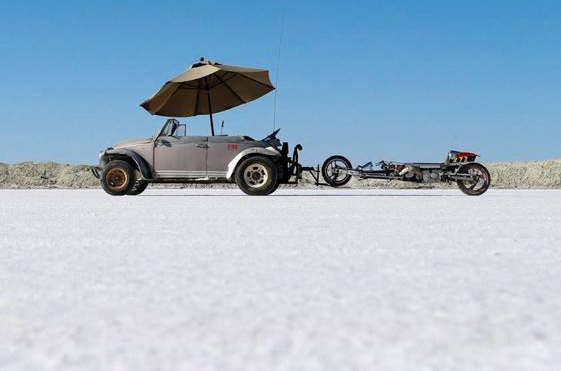 Speed Week is mainly famous because of the Hollywood movie “The Fastest Indian” starring Anthony Hopkins. He plays Burt Munro, an elderly loner who goes to great lengths to set a new record here. For once, the charming movie isn’t exaggerated. Because Burt Munro truly exists. There are hundreds of them, in all sizes and appearances. They’re all old or older, pickled, smoked and burned, with a smile like Fozzie Bear, and with wrinkles deep enough to hide another spanner. A 75-year-old with 49 participations under his tool belt is only average, and Fred touched both 276mph and his 85th birthday recently.

The participants’ list consists mainly of old-timers who don’t have anything. Like Tim. He’s a car guy, but he opted for a self-made 100cc motorbike which is so low, it’s barely controllable at low speed. “Why? Because bikes are cheaper. We’re high class on low economy.” His wife can’t understand the fuss. So Tim brought a friend to lend a hand and to drive around in a rusty Beetle with a parasol on top. “We’re sleeping in a 1973 Dodge camper van I got for free, and I found most parts of my bike all around. The leather on the tank is from an old sofa, the saddle used to be a diving suit and the steering gear originates from a chainsaw.” Tim will never earn a red cap. His device is not even barely fast enough. But he hopes to get his name in the official books, just for the sake of it; 100mph would be a tad faster than the current record.