one of the few to make history, Arthur Warner, who was the first American private citizen to purchase an airplane, with the wealth he made from inventing the speedometer, and selling a LOT of them. Not only is he the Warner of Stewart Warner, he's also the Warner on the Borg Warner trophy.... thanks Denis! 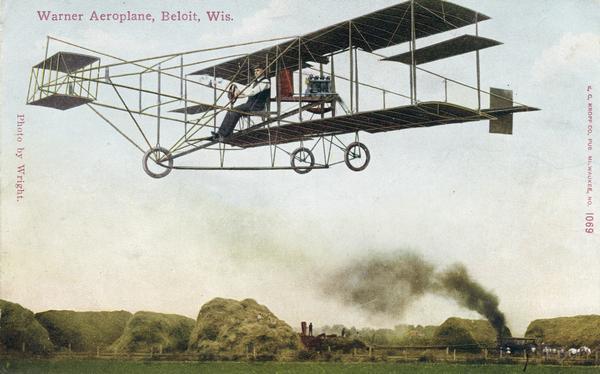 A self-taught engineer, inventor, businessman and pioneer aviator, with his brother Charles he invented the first automobile speedometer, which made him rich.

The Warner Instrument Co. was incorporated in 1903, with Warner as vice president and general manager.

He was the first American private citizen to purchase an airplane, he bought one disassembled from Glenn Curtiss for $6000, the 3rd Curtiss had made, then assembled it without instructions or manuals, and became the first person to fly in Wisconsin, at Beloit on November 4, 1909. He got 50 feet off the ground and traveled a quarter mile. This also made him the eleventh American pilot.

In 1917, the Warner Manufacturing Co. came into existence, with Warner as president, to make automobile and truck trailers. Inventions that he developed in connection with this business included the electric brake and power clutch. He retired in 1934. 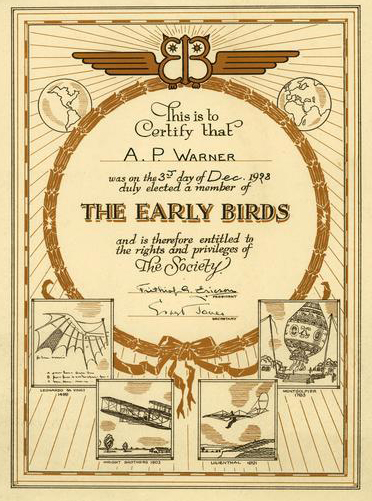 Stewart Warner was founded as Stewart & Clark Company in 1905 by John K. Stewart.

Their speedometers were used in the Ford Model T.

In 1912 John Stewart joined with Edgar Bassick to make vehicle instruments and horns. Bassick owned Alemite Co. and Stewart had bought the Warner Instrument Company; thus the name was changed to the Stewart-Warner Corporation.

They also made radios and refrigerators, among other products, and produced the ubiquitous "zerk" grease fitting, named after its inventor, associated with the company.

The company also made heat exchangers starting in the 1940s under the South Wind Division, but after then, it became independent of its parent. Stewart-Warner ranked 95th among United States corporations in the value of World War II military production contracts

Stewart-Warner was also a manufacturer and distributor of scoreboards, beginning in 1966. Scoreboards created and installed during the 1960s and 1970s included most of the famous stadiums and arenas

Arthur P. and Charles H. Warner patented the "auto-meter," which provided drivers not only with accurate readings of speeds up to 60 mph, but also kept track of the distances their cars had gone.

Coming from a sales background and largely self-educated in electrical engineering, A.P. Warner rose quickly through the ranks of the Northern Electric Company of Madison, Wisconsin and by 1897, at the age of only 27, became the head of the company's Milwaukee office.

In Milwaukee, A.P. became familiar with automobiles through the Wood Electric car, which A.P. used to help advertise the Northern Electric Company whose products helped recharge the car's batteries. He also saw the need for an instrument to measure acceleration in a uniform manner to reflect the actual speed as it increased. 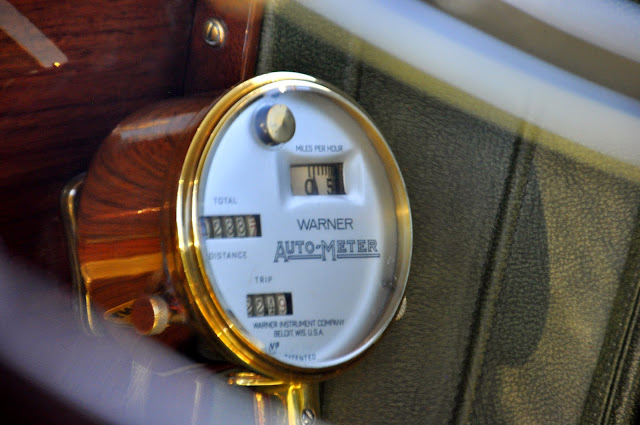 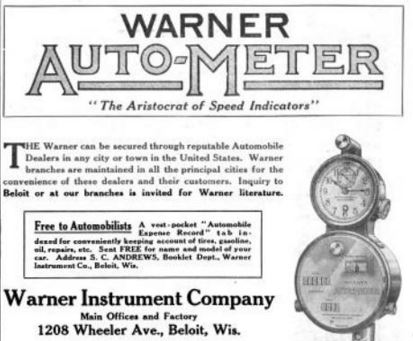 The addition of an odometer to measure and reset "touring trip" distances was another important advance for many users since road maps of the early twentieth century were scarce and often undependable. Guide books often proved the most reliable means of navigation, but used directions such as "Turn right at the yellow house and go 3.5 miles to a crossroad; turn left 4 miles to the school house, then right 7.5 miles." Without an accurate means to gauge distance, a driver would have to stop frequently to ask directions.

One competitor, the Stewart and Clark Company of Chicago, abandoned its centrifugal model speedometers and started to manufacture magnetic-based speedometers based closely on the Warner model.

The Warners sued for patent infringement and eventually won, but still sold their company to Stewart and Clark in 1912 for $1,800,000. The new company reorganized as Stewart-Warner and by the 1920s Warner magnetic speedometers became standard equipment on over 90% of the automobiles manufactured in the United States.

In addition to their speedometer success, the Warner brothers continued to invent and market many other products such as auto and truck trailers, electric brakes and clutches, basing many of their businesses out of Beloit. As part of their interest in advertising and association with timing instruments, the Warners also served as official timers of the fledgling Indianapolis 500 auto race for several years. The winner of the Indy 500 still receives the Borg-Warner Trophy to this day.

The connection to the Moto Meter:

Eager to grow quickly, in 1913, the Stewart-Warner Speedometer Corporation (S-W) had one of its employees, (engineer Edward A. Larson) who attended the National Auto Show held in New York City’s Grand Central Palace (January 3 – 10), procure an early version of the Motometer Company’s radiator-mounted motor heat indicator trade name branded the BOYCE MOTO-METER. Larson was a direct report to S-W management.

After dubiously acquiring the engine temperature indicator Larson set up a series of meetings with Motometer Co. president George H. Townsend II to uncover just how the device worked. Once he had gained enough information S-W set about reverse engineering the Moto-Meter and constructing their version.

The connection to Alemite, and Zerk fittings:

In 1924, Alemite introduced the P-25 air-operated lubrication service pump to meet the demand for quicker and easier servicing tools. With a 25-pound capacity, the pump enabled service stations to lubricate a vehicle much faster, making it more profitable for business owners. Later that same year, the P-100 was introduced for those performing a large volume of lubrication services. It soon became common throughout the industry to “alemite” vehicles.

In April of 1924, Alemite purchased the Allyne-Zerk Company, and the Zerk line of lubricant fittings and guns was added to the Alemite offering. This new line of products featured a “push-type” system, differentiating it from Alemite’s “pin-type” system. Later that same year, the Stewart-Warner Speedometer Corporation acquired the Bassick-Alemite Corporation, adding even more opportunities for growth.

And that's how this is connected to the post from a couple days ago about Zerk.