There was a movie called "Out of Sight" back in 1966... they did some publicity for it at the Riverside 1966 Motor Trend 500, and brought the Barris ZZR and Munster Dragula. By the way, this is another Norm Grabowski movie, and a year after he was on the Munsters - so, it all ties together. 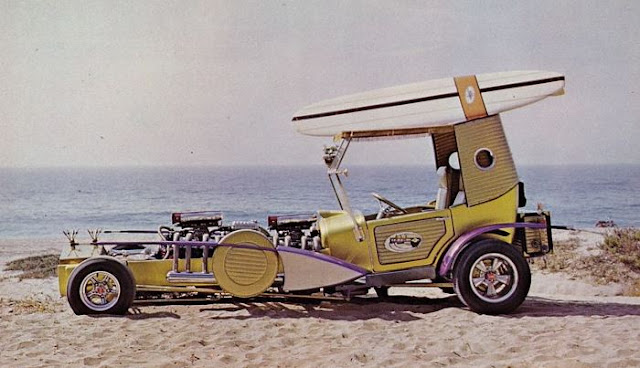 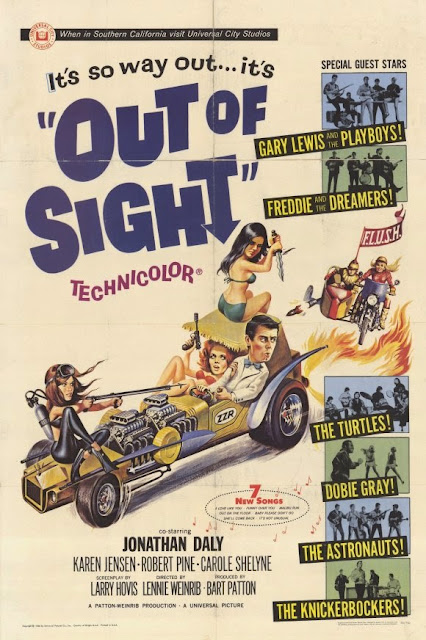 the "customized weirdo" was a 2nd fiberglass body for the Munsters Coach, called the ZZR for the goofy beach and spy movie 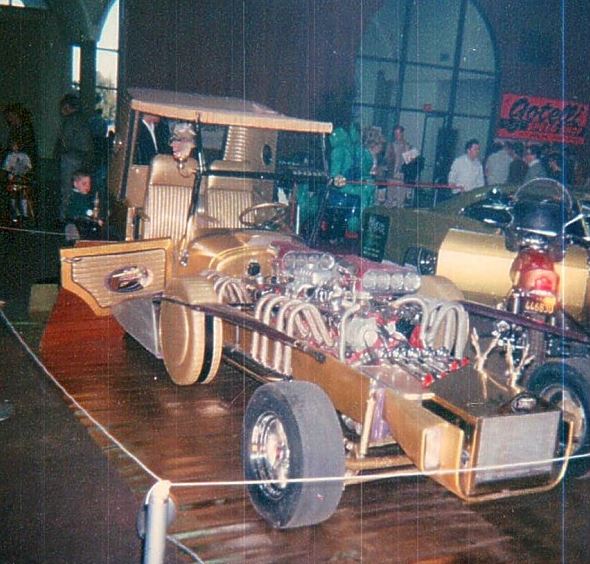 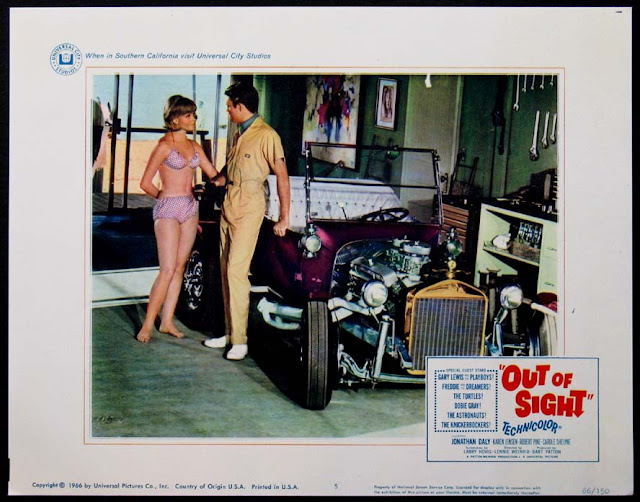 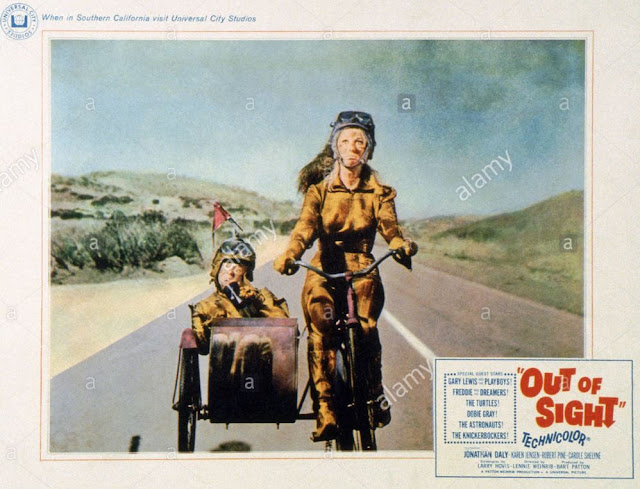 The ZZR Out of Sight show car included in the rare retouched pictures had about twenty-one weapons. Some say fire came out of all fenders,and others say bullets. It had tar and feathers,and oil slicks,the bed has and arsenal of weapons,rocket launchers, machine guns,hand grenades, and other weapons.The right passenger side's upper wind- shield frame had a flower pot with sleeping powder,if you got to close to the flower pot. The ZZR was made of from a extra Munster Koach body of fiberglass.

The top was cut off, then after the first doors, then cut after the second doors. Next the rear of the body was shoved forward to mesh to the front,and the front doors. By removing front doors, and the smaller third doors, they could mesh them together as one reinforced by plywood to the back of the doors. This then gave a longer slender look with the new custom body. The frame was square tubing. The front axle was tubular axle on hot rod tires and Radir Star Mags with right Radir Knock- offs.

The body was channeled over the frame, and tilted down and then bolted into place. A tall fiberglass scoop was made over the cowl area. The top was made of steel, which wrapped around the back like a Model T but had two port holes on both sides of the top, with chrome rings, to seal the port windows.

The flat top was squared and was yellow with pom poms. The windshield was like the Munster Koach, but had another type of windshield angled at diagonal, to fit the top securely.

The engines were two 1966 Buick Riveria 425 CID bored out to 440 CID. Each engine had one four barrel carburetor, but the front engine has a Cadillac air cleaner, and is higher with it's four injector type scoop then the rear one. 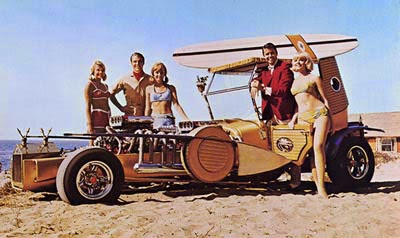 This has two radiators. The engines are mounted tandem style.

Barris employee Les Thompson had engineered, designed this marvel,which does actually work. It you move the gear shift forward, the second engine will engage. The rear fenders are lavender from the Munster Koach. Flames come out of the rear fenders.The two long front tear drop fenders do have barrels that shoot bullets if the caps are popped off. They incorporate spare tire holders with lavender straps to hold the tire holders in place that are supported by pontoons.

The ZZR tire holders are covered with gold Naugahyde tuck and roll. The top side is also covered the same way along with the upholstery for the gold bucket seats. When the driver turns on the car, the seat moves forward. Then the side arms snap into place. Special graphics were applied to the doors  with House of Kolor Gold used the paint the car.

The car has custom headers for each engine.Then the headers were collected into a cylinder type pipe, which looks like a CO2 capsule, to move exhaust to the rear and cut the noise to the engines.

The ZZR also had side hood doors with custom headlight shells for the French headlights which turned vertical to fit between the front fenders, that served nicely for the two radiators which the custom brass grill snugly fit onto.

This car had a Ford Econoline Van steering column, two metal coolant overflow tanks to keep the Buick engines cool, and Mercury rectangular gas gauges. The rear end was a Oldsmobile to the Buick 2 spd automatic transmission. The hood ornaments were like two sets of branches on the custom brass grill.

According to http://themonkeemobiles1966.blogspot.com/2013/04/the-famous-turnpike-hauler-was-built-by.html  it was Dick Dean who built these and more at at Barris Kustoms. George Barris main body man was Dick Dean, who did the scroll work on both Munster Koach#1 and built the car. He had helped the Barris crew, and 1984 built Munster Koach#2. He built 4 Dragulas. Only the first was used in film.

I had forgotten I had posted about it before
http://justacarguy.blogspot.com/2017/10/barris-zzr-show-car-from-spy-movie-out.html