Really? In April 2018, Roswell, Georgia, Police Dept used a coin-flipping app to decide if to arrest a driver for 80 in a 45zone, on wet roads, according to Body Cam video. This is what cops are doing, but rarely does the public see behind the scenes just how unprofessional they are 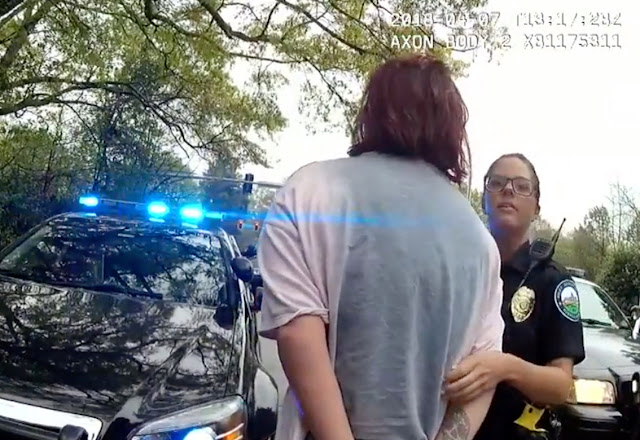 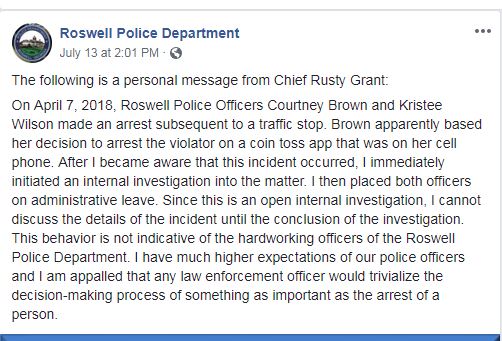 Strange, the police chief is too stupid to comprehend how writing "This behavior is not indicative of the hardworking officers of the Roswell Police Department" show that he isn't able to distinguish between his officers, and hardworking officers, OR, he's unable to understand the word "indicative" means that what his officers are guilty of - means they DO INDICATE that HIS police department is indeed, and evidently, commonly behaving like teenagers.

So, are they really not working in the police dept best suited to their ability? If their police chief's statement is to be used to judge the situation, yes. They were. He's an idiot, and so are they

It took Chief Grant 2 months to watch a few minutes of video. He knew about this and did nothing until pressure was applied.

And to listen to these cops, who are about to violate their oath of office, their code of professional conduct, and the civil rights of the driver... nag the driver for driving fast? Shit... that's some people oblivious to their own egregious behavior getting on someone else's ass for bad behavior. Just another day in police vs citizen in the USA

A body-worn camera recorded an officer’s comments to Ms. Webb: “The ground’s wet. It’s been raining. You’re going over 80 miles an hour on this type of a road. That’s reckless driving, ma’am.”

In the footage, Ms. Webb can be seen handing her license and keys to the officer, who walks to her patrol car. Three minutes pass before the officer returns to make an arrest.

It would be two months before Ms. Webb learned what happened between the time she was pulled over and she was put in handcuffs: Officers turned to a coin toss while deciding what to do.

“My civil liberties were violated,” Ms. Webb said on Friday. “To think that these are the people who are supposed to be helping us and looking out for us. My freedom was put at risk because of a coin flip. It was a game to them.”

The coin, according to the officers, landed on tails, which meant they should have let Webb go with a speeding ticket. Instead, the two can be heard laughing as they decide to charge Webb with reckless driving and arrest her anyway.

The episode was first reported by 11Alive, a news station in Atlanta, which said it brought the footage to the attention of Ms. Webb.

Ms. Webb said she filed a motion of discovery to see the video and watched it just days before her scheduled court appearance on July 9, leading prosecutors to drop the charges.

And then you can see it took 3 cars to roll in as back up. For a single woman driving too fast. Seriously? How damn boring is a day on the job for the police dept of Roswell? Population approx 100,000 residents, about 20 miles north of Atlanta

To me, this is the evidence that demonstrates the citizens are right in demanding access to all body cam (taxpayer funded) video that isn't tied up in lawsuit evidence.

What ever cops are doing on the job, IS OUR BUSINESS. Their behavior on the clock, is PUBLIC DOMAIN. If they can't behave professionally, they must be removed from the payroll of the city, state, county, or whatever, and have their govt authority removed.

As Lincoln stated: that government of the people, by the people, for the people, shall not perish from the earth. And the govt has to be accountable to the people.

As stated in the 2nd video, "all the police in the department knew about this for months" Well, there you have it, conspiracy involving all those police who knew, and didn't act accordingly responsible and professional, and have the two cops with the coin flip arrested, or ticketed, or whatever, for violating the code of professional conduct, and the drivers civil rights to not be arrested on a computer generated coin flip.

So, other cops don't give a shit about how their contemporaries behave on the job either
at Monday, July 16, 2018