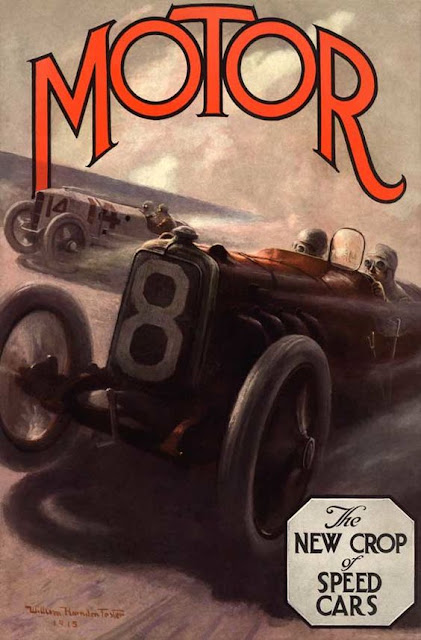 From his uncle — and from his father, who was also a “railroad man” — Foster inherited a love of trains. Indeed with the exception of his painting of dogs, Foster’s dramatic canvases of steam engines brought him his greatest fame as an artist. He first entered the national limelight, in fact, with a series of train paintings reproduced in Scribner’s magazine in 1910.

He took a course at MIT on locomotive mechanics, just to learn where every bolt and rivet should be, to ensure accuracy in his work. 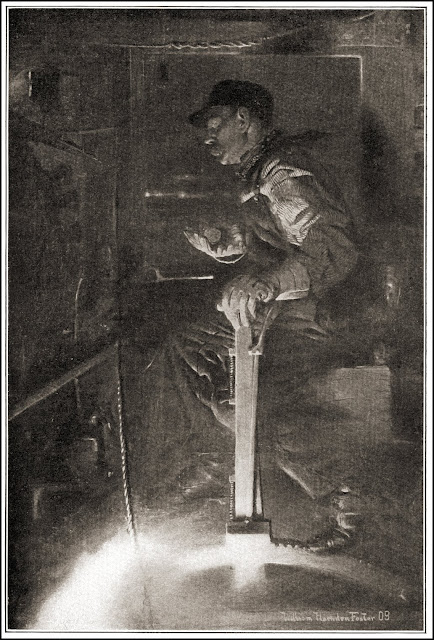 Scribner’s was one of the leading magazines of the day, featuring such writers as Edith Wharton, Theodore Roosevelt, and John Galsworthy, and artists such as N.C. Wyeth, A.B. Frost, James Montgomery Flagg, and Philip Goodwin.

Foster’s contribution, entitled “All in a Day’s Run,” was so well-received that the magazine assigned him to Panama in 1910 by Harpers to cover the building of the Panama Canal, in an article and in illustrations. In 1915, he signed on to the crew of a livestock freighter to report on the Atlantic transshipment of cattle. The voyage was hardly pleasant, but Foster produced a superb article, with illustrations, published in Harper’s Monthly.

This, in turn, led to more work, not only for magazines but for corporate clients as well — Oldsmobile, to name one.

Foster had learned his trade from the best in the business at the School of the Museum of Fine Arts in Boston. One of his instructors there was undoubtedly Frank Benson, the renown sportsman-artist who almost single-handedly created the genre of the modern sporting print. From Boston, Foster moved on to Howard Pyle Art Colony in Wilmington, Delaware. Pyle was widely regarded as the finest book illustrator of his time, and he counted N. C. Wyeth and Maxfield Parrish among his famous pupils.

He learned to hunt with his grandfather, Everel Harnden, whose farm was a veritable sporting camp and farmhouse at the crossroads, that, years before, had served as a stagecoach tavern on the Boston - Lowell turnpike.” This would be at Shawsheen and Main streets, now the site of the Oakdale Mall.

His grandfathers Parker 16 gauge is still in the Foster family and is said to be the second-most famous Parker 16 in existence, second only to the gun owned by Annie Oakley.

When William Foster and Marion Lowd were first married in 1908, they built a summer camp in South Freeport, Maine. They became friends with Leon L. Bean, who in 1911, invented the Maine Hunting Shoe. In 1925, Foster let L.L. Bean, use one of his paintings, “The Moose Hunter,” to jazz up a little mail order catalog he’d been distributing since 1912. That painting shows a hunter, clad in L.L. Bean gear, coming face to face with a moose. Foster subsequently did several covers for L.L. Bean’s catalogs.

He was one of the 3 men that worked out the basics of, and thereby invented, skeet shooting...
He wrote and illustrated the book New England Grouse Shooting:
But he never knew the place of honor his book ultimately occupied, it came to be recognized as one of the true classics of American sporting literature. Transcending the geographical boundaries of its subject matter, it was embraced by sportsmen all across the country, sportsmen entranced by the gentle authority of the text and the wondrous pen-and-ink drawings that accompanied it. It became a kind of religious tract, preaching a gospel of style, comportment, and respect that grouse hunters everywhere sought to emulate. Life imitated art, and New England Grouse Shooting defined, for all time, the look and feel of the sport, capturing its elusive essence between hard covers.

For that matter, he never even saw it in print. Scant months before it was published, William Harnden Foster fell dead of a heart attack at the running of the 1941 New England Bird Dog Championship. He was just 55 years old.

Breeder, judge, competitor, framer of standards, club officer (he was for many years the secretary of the Association of New England Field Trial Clubs), reporter, historian (he delivered a paper entitled “Bird Dogs in New England” at the 1930 New England Game Conference), painter: In the world of bird dogs and field trials, there is literally no capacity in which Bill Foster did not serve.

It wasn't for another 30 years that an artist came along to finally succeed him in American sporting dog art.

He was also an avid waterfowler who crafted his own duck skiffs and decoys (one of his Maine friends was master decoy-carver George Soule). 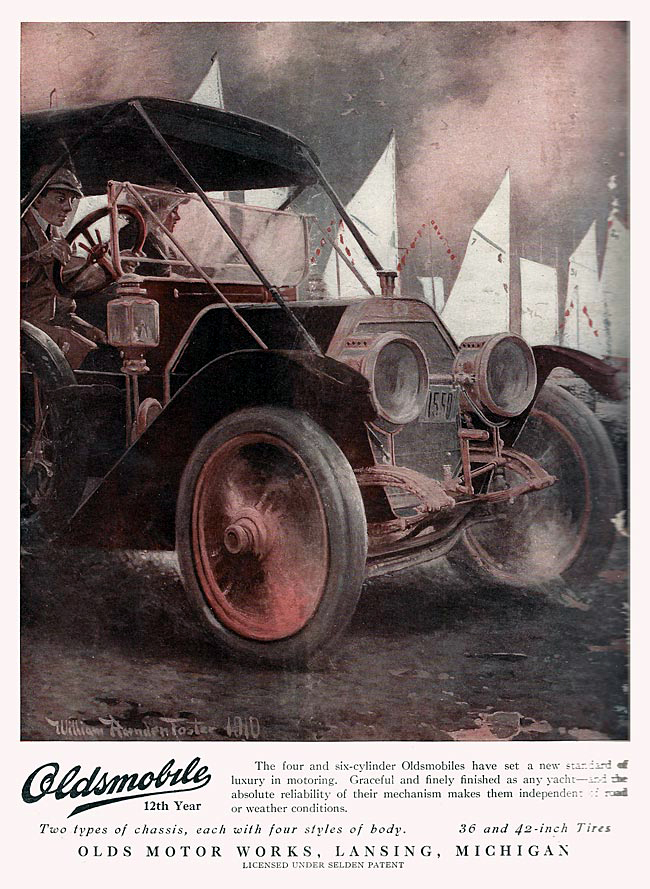 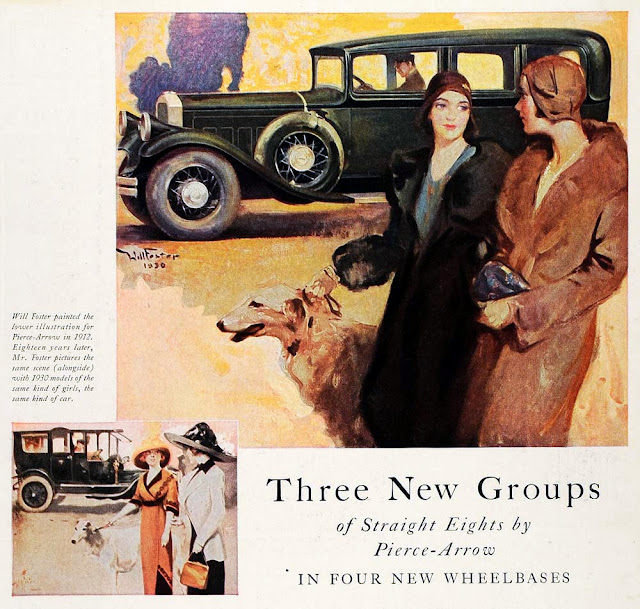 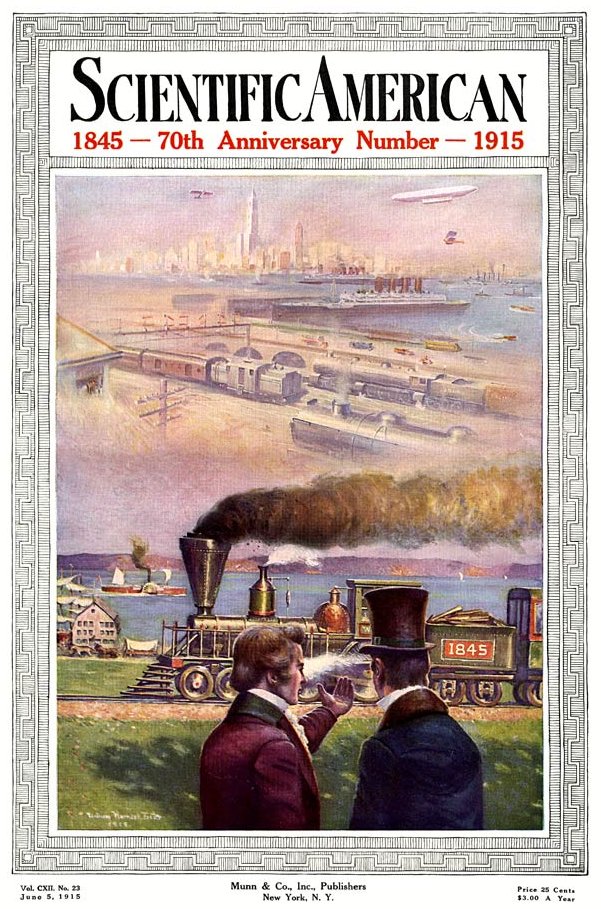 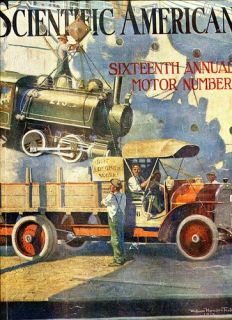 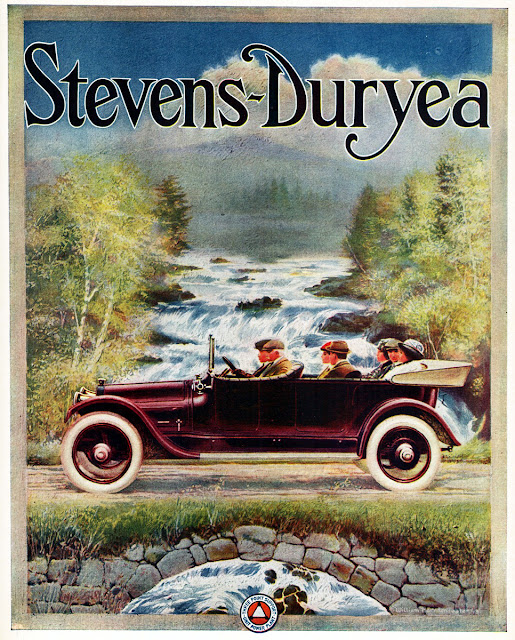 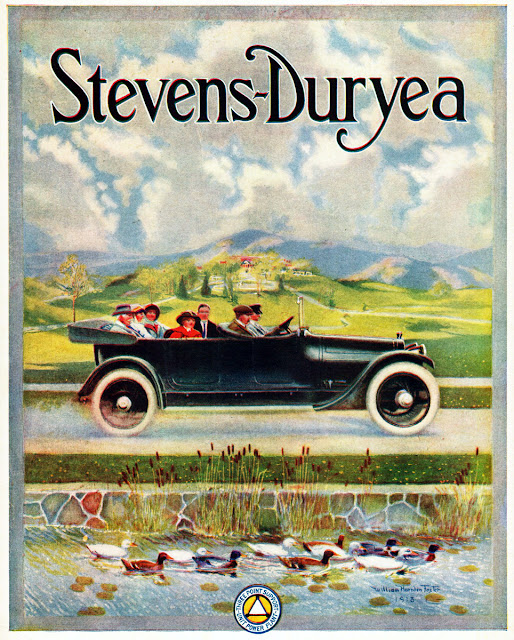 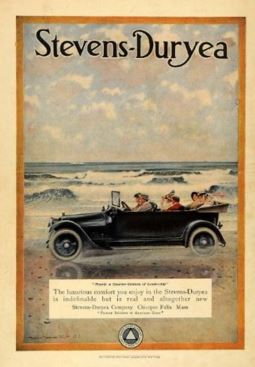 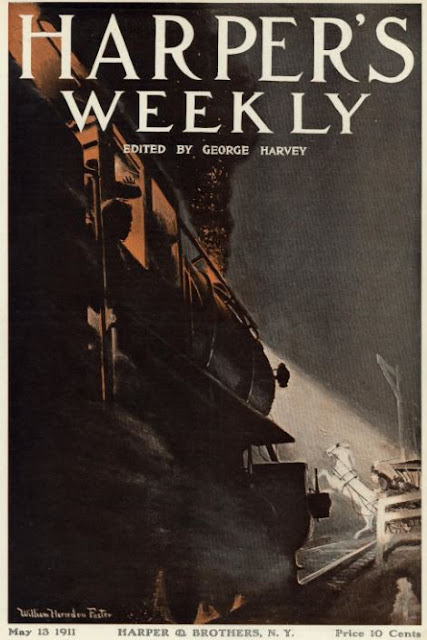 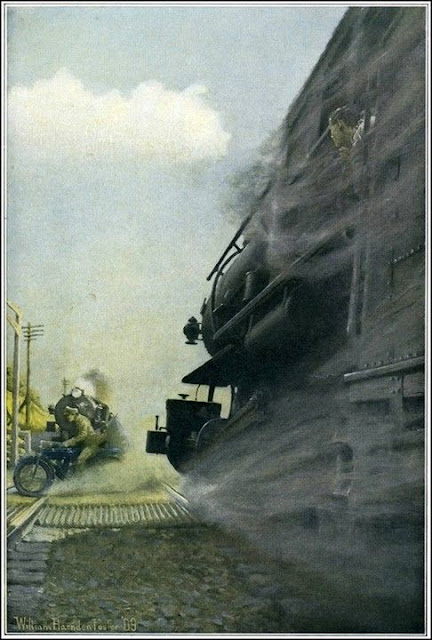 Above: All In A Days Run 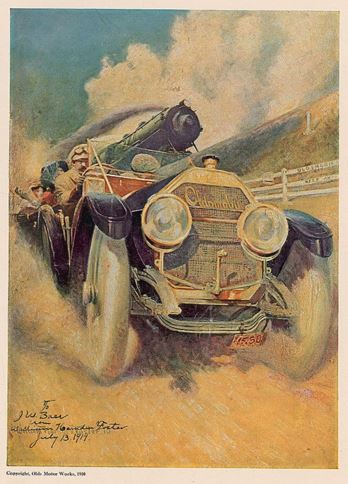 "Setting The Pace". 250 litho copies were made and given to Oldsmobile dealerships around 1911.

In 1910 the Oldsmobile company asked him to render their Oldsmobile Limited on canvas. Foster depicted the luxury Limited racing a New York Central train and winning. His representation was showing the shift in the transportation choice in America during this time. The automobile was changing our societies view on mass transportation and proved that the pursuit of personal freedom was not about to slow down. He titled the work “Setting the Pace”. Once this work was complete Oldsmobile reproduced the image widely. It quickly became the most famous automobile painting of all time. One of the very early reproductions was a special limited chromo-lithographic edition. This reproduction was a high quality reproduction done on stretched canvas in 1911 by the Meyercord Company of Chicago. It mirrored the original in both size and texture. The reproductions were done by craftsmen and resemble the original down to the aging of the medium that was used. They had a limited run of 250 copies. 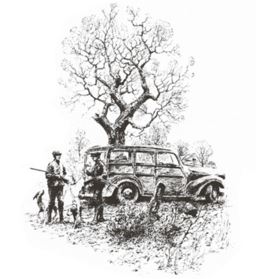 Interesting sidenote, this art is all public domain, in its country of origin and other countries and areas where the copyright term is the author's life plus 70 years or less. Also because it was published (or registered with the U.S. Copyright Office) before January 1, 1923.  https://commons.wikimedia.org/wiki/File:SettingthepaceWHF.jpg 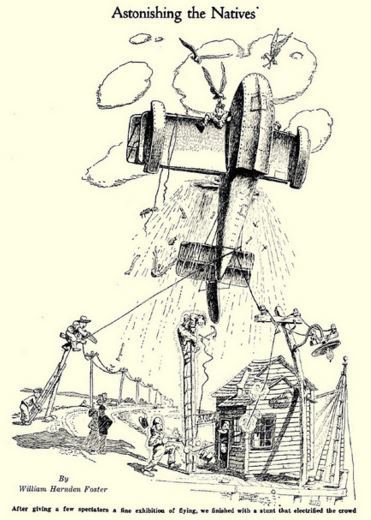 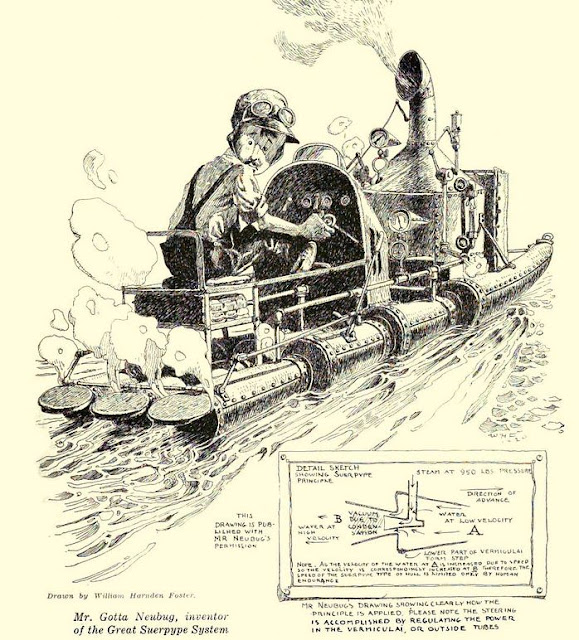