The 1965 Corvette Sting Ray sitting atop this demonstration stand was not originally purpose-built for this use. It actually began its life as a road-ready early-production example that was finished in Le Mans Blue and had a white interior. When new, it was shipped to a specialty company that produced dramatic and attention-grabbing exhibits for commercial and industrial shows. There, the car was fully disassembled and rebuilt as this one-of-a-kind display stand for use by General Motors and Chevrolet on the auto show circuit. 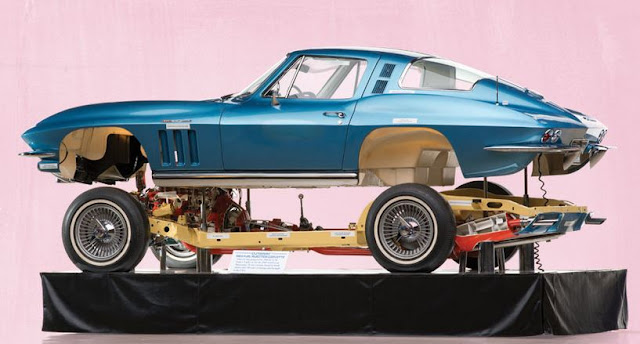 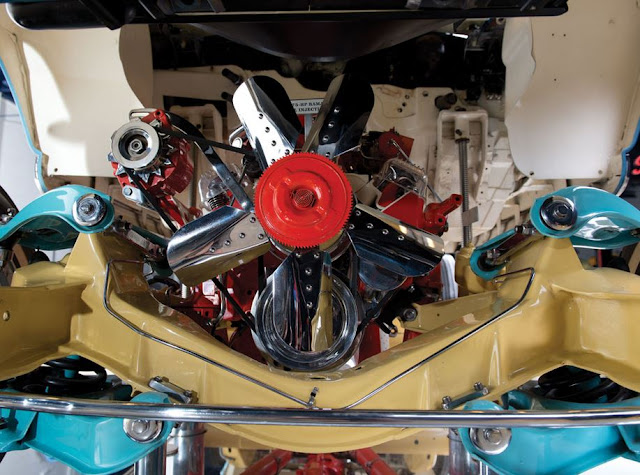 In order to properly demonstrate all of the hidden mechanical components of the car, the body was mounted on elevating rams that would raise the exterior nearly two feet off of the chassis, leaving its internal running gear exposed. Careful and well-thought-out incisions were made into all of the major components to further illustrate its build quality and overall operation. The exterior of the engine, transmission, driveshaft, and other mechanical parts were finished in bright red to clearly contrast the body, and the casting of the four-speed manual gearbox was “cut-out” to showcase the clutch and flywheel. The heads received custom-made, transparent valve covers, with additional cut-out panels revealing the critical inner workings of the fuel-injection unit, exhaust, intake manifolds, and the block itself. 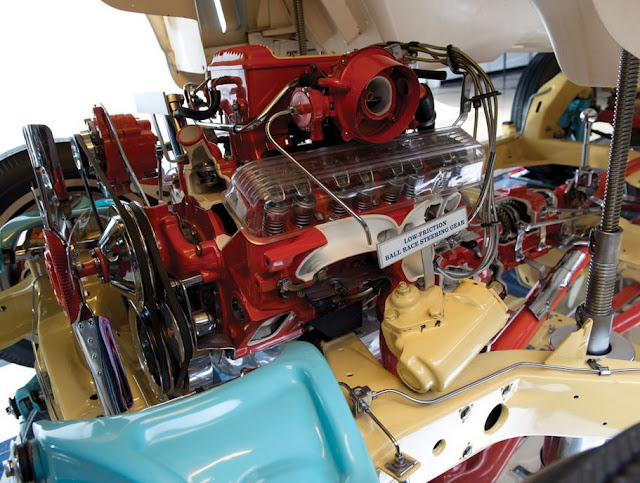 At the show, a series of electric motors would lift the body off its chassis by its elevating rams, and then it would operate all of the “cut-away” internal components. Rather than function in real time, the components were geared to work at just a few revolutions per minute, as this would allow for observers to fully digest and understand how the underlying mechanical components functioned. Just like any other engine, the turning cam pushed the corresponding intake or exhaust valve, while the crankshaft pushed each piston to and fro. Brightly plated U-joints, which were attached to the Positraction rear axle, drew onlookers’ eyes to where the wheels spun and moved, activating the rear suspension and thus demonstrating the Corvette’s road-holding abilities. 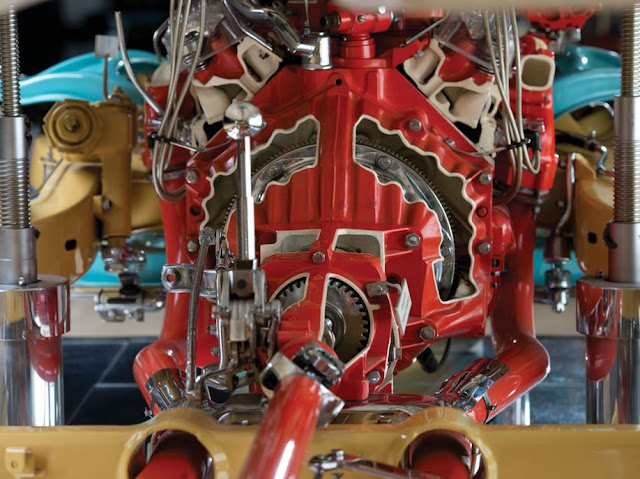 After it left the show circuit in 1965, the display stand’s history is largely unknown. It was discovered in South Africa in the mid-1990s, and from there, it was sent back to the United States with a new owner. Later, it became a centerpiece of the famed collection of Al Wiseman and was then purchased by the Andrews’ in 2007.

Under Mr. Wiseman’s ownership, the display stand received a sympathetic restoration, which returned it to the condition that it would have been seen in on the show circuit in 1965. All of the car’s original instrumentation, including the speedometer, tachometer, gauges, a teakwood steering wheel, and amusingly, even its AM/FM radio, are still intact, and the car is still fitted with its original wide sidewall Rayon cord tires. All of the car’s mechanical demonstrations remain in fully functional and working order, including the initial lifting of the body, which is accomplished by the simple push of a button, allowing for its ornate mechanical dance to be enjoyed by all who see it.