The last B29 Superfortress that still flies, Fifi, is in San Diego until Wednesday 630pm, Brown Field, Otay Mesa, a couple miles East of the 805 on the 905 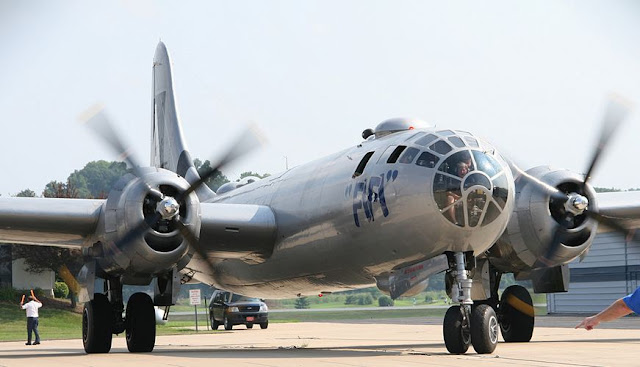 World’s Only Flying B-29 Superfortress Coming to Brown Field

The Commemorative Air Force’s (CAF) famous Boeing B-29
Superfortress bomber, FIFI -- the only remaining flying example of the aircraft in the world –
will visit San Diego March 11 through 13.

The B-29 will fly into Brown Field accompanied by a P-51 Mustang, Man O’ War. The tour stop is part of the CAF AirPower History Tour featuring an ever-changing combination of CAF historic warbirds at each of its stops.

The Boeing B-29 Superfortress was first flown in 1942 and began active service in 1944. It is
perhaps best known as the aircraft whose missions over Japan helped bring about the end of
World War II. It was designed as a replacement for the older B-17s and B-24s, with longer range
and greater bomb loads. The B-29 was also used in the Korean War in the early 1950s and was a
staple of the U.S. Air Force until the late 1950s.

In addition to the P-51 Mustang, the B-29 will also be accompanied by a C-45 Expeditor, Bucket
of Bolts; and a T-6 Texan. The airplanes will be on the ramp at San Diego Jet Center, 1424
Continental Street, in San Diego, Monday through Wednesday.

Events are open to the public and will allow attendees to get up close to these famous military
aircraft. Gates are open from 2:00 p.m. to 6:30 p.m. on Monday and 9:00 a.m. to 6:30 p.m.
thereafter. Admission, $10 for adults and $20 for families with children under 18, includes cockpit
tours of the B-29 when the aircraft is not in motion.

There are opportunities for attendees to
purchase a ride in all of the visiting airplanes. Visit the tour website at www.AirPowerTour.org or
call (432) 413-4100 for more information about the tour schedule and to make ride reservations.
The cost for airplane rides in these four airplanes ranges from $65 to $1595. There is a discount if you purchase your seats on line.

The mission of the Commemorative Air Force is to honor the men and women who built,
maintained and flew in these airplanes during World War II. The organization believes that
mission is best accomplished by maintaining the airplanes in flying condition; taking the airplanes
to the people allowing them to experience the sight and sound of the aircraft in flight.
If you miss the San Diego stop, the rest of the tour is
Palm Springs, CA
Camarillo, CA
Burbank, CA
Las Vegas, NV
Albuquerque, NM
Reading, PA
Cincinnati, OH
Dayton, OH
Denver, CO
New Century, KS
Fayetteville, AR


About the CAF’s B-29 Superfortress, FIFI:
FIFI was acquired by the CAF in the early 1970s when a group of CAF members found her at the
U.S. Navy Proving Ground at China Lake, California where she was being used as a missile
target. The airplane was rescued and restored and flew for over thirty years until 2006 when the
chief pilot made the decision to ground her pending a complete power plant re-fit. What followed
was an extensive four year restoration that included replacing all four engines with new custom
built hybrid engines. FIFI returned to the sky in 2010

When Fifi was found, and restored, there were no qualified pilots for a B29. But, there was an airplane (C-97) identical in every respect but he engines, and the pilot Randy Sohn, who had flown everything but a B29, was chosen by the financer of the restoration, Col. Vic Agather to get Fifi up in the air from the gunnery range where it had been parked. Full story at http://tour.cafb29b24.org/thursday-july-26-2012-the-most-qualified-of-the-unqualified/ 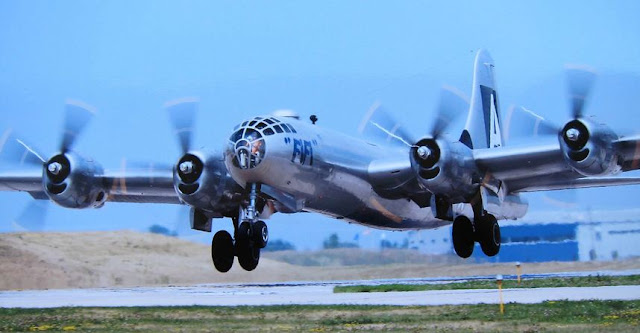