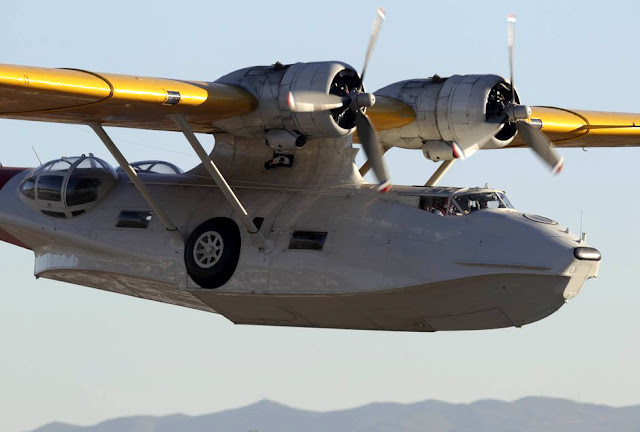 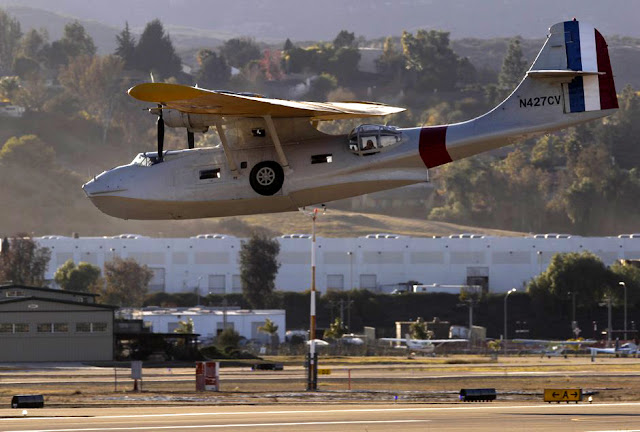 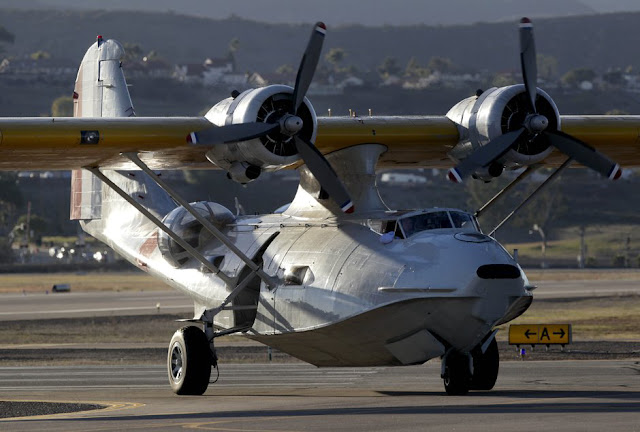 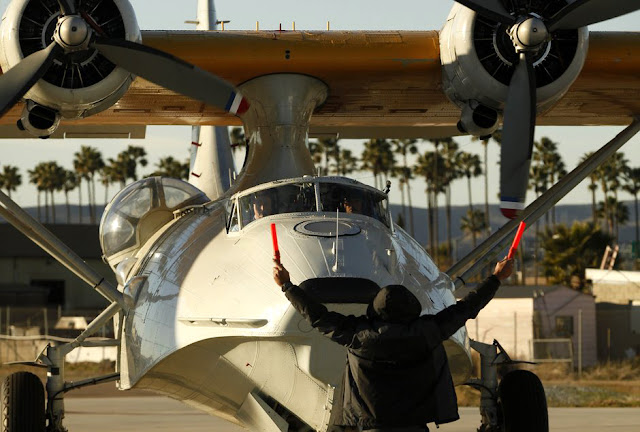 Slattery purchased the plane in 2010 and finished the restoration two businessmen  started but didn't complete in South Africa.

Once all the repairs were made, in all a six-year project, and it met federal guidelines, the next step was flying the 70-year-old aircraft 1/2 way across the world at a top speed of 120 miles per hour.

So Slattery sent three of his full-time employees — pilots Bob Franicola and Mike Castillo and chief mechanic Matt Voigt. The trio flew from South Africa to Namibia to Angola to Cameroon to Liberia to Brazil to French Guiana to Trinidad to Panama to Costa Rica to Mexico. The first 14 legs of the trip ranged from five hours to 13 hours apiece. The final two legs were from Tijuana to Brown Field and then on to Gillespie Field

The aircraft is the 46th in Slattery’s collection and will eventually be on display in a “Greatest Generation Naval Museum,” that he intends to open in the coming months.

Photos from http://www.utsandiego.com/news/2013/jan/15/businessman-brings-WWII-plane-home/ plus the rest of the article.

Intrigued by history, Mr. Slattery is a collector of historical aircraft. His impressive collection includes a 1929 WACO UPF-7, one of the first US mail carriers flown by Charles A. Lindbergh on the Minneapolis-Chicago mail route and number 3 of only 4 produced. It is the only flyable one in the world today, but is only one among many rare and historic planes that make up the collection.

Although this collection would be enough reason for anyone to be proud, perhaps the most noteworthy aspect of Mr. Slattery’s flight hobbies includes not only his many achievements, but how he has sought out ways to share his pursuits with others in his current undertaking – “The Greatest Generation Naval Museum.”

Scheduled to be up and running within a year, The Greatest Generation Naval Museum will exhibit planes, along with other memorabilia, that demonstrate how World War II changed the way Americans live today. What separates this museum from others is that every plane on display will be, not only in pristine condition, but 100 percent flyable and will also be used for air shows and other venues all over the country.

The mission behind the museum, is to provide people with an understanding of the historical significance of World War II, while honoring those that were lost. Building a tribute to the aviation community and the sacrifices of America’s Greatest Generation is, when it comes to aviation, Mr. Slattery’s truest and greatest passion.

If you’d like to make a financial contribution for The Greatest Generation Museum project, send your check or money order to:
Attn: Nicole Rivera
16981 Via Tazon
San Diego, CA 92127

If you like WW2 military museums, try the ones listed here: http://greatnavymusueums.blogspot.com/2011/11/greatest-generation-says-goodbye.html
at Wednesday, January 16, 2013