I love a B 17 bomber story, here is a good one , a surplus B 17, a guy who couldn't fly one, who wrote bad checks, and couldn't get a permit to move it and build a gas station 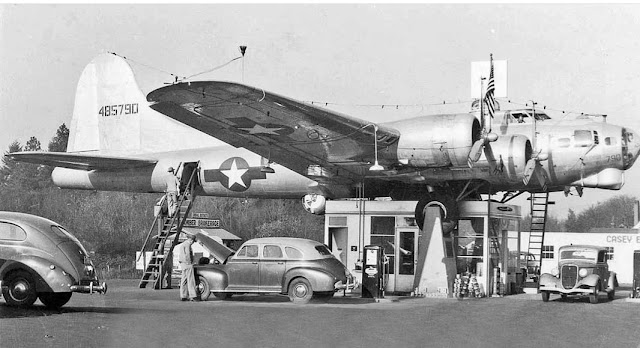 In Milwaukie Oregon, on the 99e highway, also known as McLoughlin Blvd, 6 miles south of Portland Oregon. Between I5 and the 205 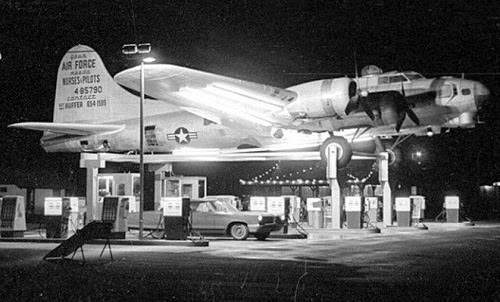 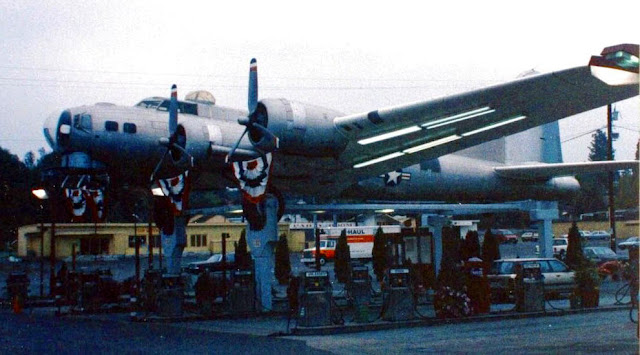 Above is the "Before" photo referring to the current or recent restoration. Notice the great fluorescent lights under the wings 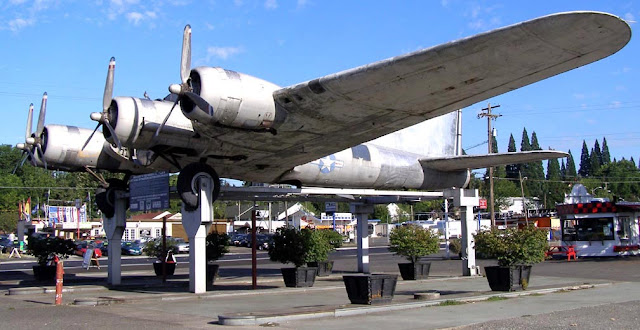 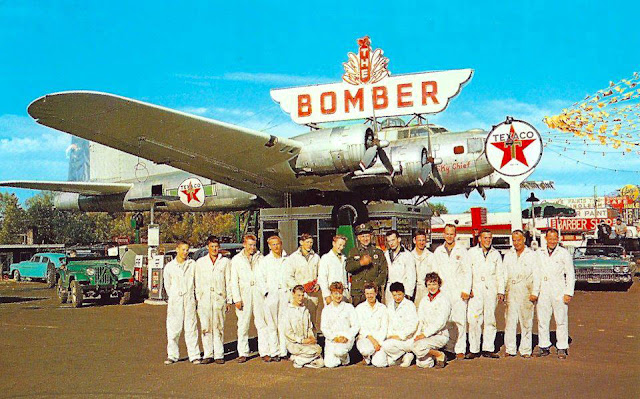 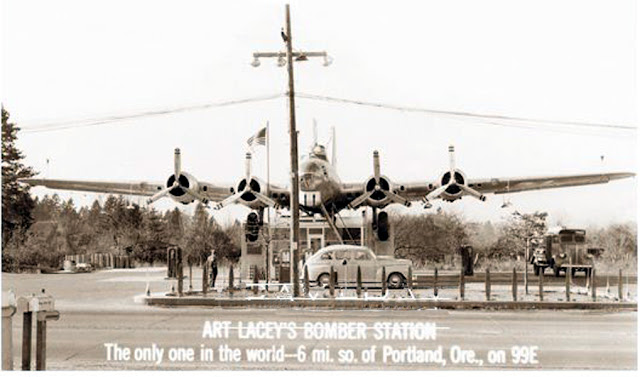 Shortly after WWII , Art Lacey went to Kansas to buy a surplus B-17. His idea was to fly it back to Oregon, jack it up in the air and make a gas station out of it.

He paid $15,000 for it. He asked which one was his and they said take whichever you want because there were miles of them. He didn't know how to fly a 4 engine airplane so he read the manual while he taxied around by himself. They said he couldn't take off alone so he put a mannequin in the co-pilot's seat and off he went.

He flew around a bit to get the feel of it and when he went to land he realized he needed a co-pilot to lower the landing gear. He crashed and totaled his plane and another on the ground. They wrote them both off as "wind damaged" and told him to pick out another. He talked a friend into being his co-pilot and off they went.

They flew to Palm Springs where Lacey wrote a hot check for gas then they headed for Oregon. They hit a snow storm and couldn't find their way so they went down below 1,000 feet and followed the railroad tracks. His partner sat in the nose section and would yell, "TUNNEL" when he saw one and Lacey would climb over the mountain.

They landed safely, he made good the hot check he wrote, and they started getting permits to move a B-17 on the state highway. The highway department repeatedly denied his permit and fought him tooth and nail for a long time so late one Saturday night he just moved it himself. He got a $10 ticket from the police for having too wide a load.

The plane weighs 32 tons, is 75' long and has a wingspan of 104'. Mr. Lacey worked on planes during WWII but he was not a great pilot. The gas station opened in 1947, followed by the Bomber Drive-In in 1948. The station started out with five pumps but eventually had 40. Although it closed in 1991, the original family still runs the restaurant and the plane is still on display