A father - daughter project car, blogged about to share the trip from neglect to a teenagers daily driver 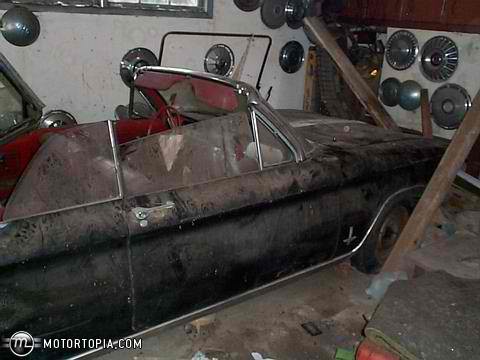 Starting in 2002, Brianna wrote the commentary that followed what is probably familiar to most of us, finding a cool car, buying it, then leanring that the engine is seized, and all the rest of the things that must be repaired, replaced, and improved to make a good car from it.

Here are some highlights:

4/13/02: Trailered the car to our house. What a job getting it onto the trailer. Pictures taken before we moved the car. 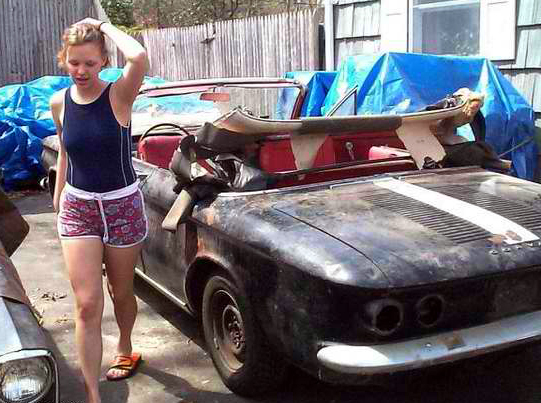 4/14/02: Emptied out the interior and clean the outside and the seats. Smells a lot better too. Can't get into trunk because the ignition key (only one that came with car) won't work. Pictures taken as the cleanup goes on. http://www.motortopia.com/album/view/p/cars/t/vehicle/v/124/a/21402/i/after_we_got_her_home

4/20/02: Mom took the wheels to the tire place to have the old tires removed. They found a wasp nest inside one of them. Luckily no one was hurt.

8/3/02: Shook a chain around the inside of the tank and flushed some more.

10/18/02: Dad did one of the jobs that I didn't want to. He painted the underside of the car in the area where the gas tank gets installed.

10/20/02: We adjusted the carburetors, then it was time to see if the engine would turn. We removed the spark plugs, put a little oil into each cylinder, put a wrench on the crank bolt and pushed. Nothing moved. Dad put an extension on the wrench and really leaned on it. The only thing that moved was the engine on its mounts. Dad sprayed PB Blaster into each cylinder, and said we'd wait to see if it works. Worst case is we have to take the engine apart. We hoped the PB Blaster would work. Also got the gas tank strap cleaned and primed.

10/28/02: Moment of truth (at least one of many). We hooked a battery up and tried to turn the engine with the starter. Only clicks, no motion. Disappointed, I went back to my homework, while dad started the disassembly process. He drained the oil, removed the exhaust pipe, muffler, and one of the shrouds. This will be more of a project than I'd thought. Here's some pictures.

10/29/02: Dad decided to dive right in. I was glad that it was him and not me that discovered the rat nest after removing the top shroud. He also filled a box with the rest of the shrouds, oil cooler, coil, generator mount, fuel pump, and marked baggies filled with nuts and bolts. I'm glad I don't have to remember where everything goes.

11/23/02: We did some beating and banging. With dad on his back on the floor and me working above, we traded whacks with the sledgehammer until we got four of the six cylinders off. It was getting late by that time, and after twenty minutes of trying on the last two, we gave up and dad sprayed more of this PB Blaster into the two still stuck cylinders. He keeps telling me that this Blaster stuff is great, but I've got my doubts.

4/10/05: After a long winter of not working on the car, Dad drug me out to the garage to put Bondo on the small dents and dings left after he hammered on the car. Dad kept the spreaders and mixing board clean while I mixed and applied. Sorta like frosting a cake, which I was never really good at.

4/17/05: Time to sand. My arms could only last about an hour and a half, but Dad and I got most of the Bondo smoothed out. It's going to need a second coat to fill in some voids and places where we sanded down too far.

5/1/05: I was too busy studying for finals, but Dad finished sanding the Bondo and put on the second coat until he ran out of Bondo.


You might have lost interest at this point, but here is where that struggle we've all had with old cars begins

1/15/06: Time to go back to school. I left the house around 9 PM. I only got about 25 miles down the road when the engine backfired a couple of times and then lost all power. I coasted onto the shoulder of the road and called Dad. He threw a bunch of tools into his car, and drove down to try and fix the problem. While I was waiting for him, I tried cranking the engine, but nothing turned. This was a new, not-so-good problem. When Dad got there, he discovered that we'd forgotten to tighten the distributor clamp bolt, so he thought that the timing had changed. He static timed the distributor, and then we decided to try and push-start the car with his. He explained how the Corvair is one of only a few automatic transmissioned cars that can be push started. His car pushed mine up to 40 mph, and the engine was turning, but not running. He ended up pushing me to the nearest offramp, which fortunately had a Park-and-Ride. We move all my stuff into his car, lock my car, and drive back home.

1/16/06: Dad got up early and packed even more tools into his car and drove down to the Corvair. He was able to get the ignition switch/starter to work. He did a bunch of sleuthing and found that the coil was sparking, but the spark wasn't getting to the plugs. He replaced the new cap and rotor - still dead. He called Ken Hand who told him it may be the condenser or the coil. He replaced the new points and condenser - still dead. He replaced the coil - bingo. It started right up, and ran nice and smooth. At that point I showed up with Mom. She and I had decided that even if Dad was able to get my car running, I wasn't going to trust it to get me to school. So, I took Dad's car on to school, and he drove mine home.

1/19/06: Heard from Dad. Here's what he reported: "I went out to drive the Corvair home from work, and it wouldn't start. The now-familiar sound of an engine without spark was all I heard. I went inside work and borrowed a multi-meter to check things out. I also called Ken Hand again who gave me a plan of attack and a bunch of valuable information. I followed his plan and discovered that voltage at the positive terminal of the coil was not what it should be with the points open. From that, and his description of how a load resistor worked, I determined that the noise-suppression condenser attached to the negative terminal of the coil was shorting directly to ground resulting in no spark at the points, thus no spark from the coil. I disconnected that condenser, and the engine started right up. Looking back on it, this was probably the problem since the first time the car died two weeks ago." I still wanted to have him drive the car for a week or so more to make doubly sure all the gremlins have been killed.

read all about it at:
http://corvairfleet.blogspot.com/2009/08/heidi-how-we-got-to-this-point.html as it's amazing how much trouble they had with this Corvair and the number of repairs and hours of trouble shooting the oddest problems up to 8/31/09 on just this link, the blog continues to present day
at Tuesday, February 07, 2012