the 25th Anniversary Corvette, Pace Car edition, an instant draw for investors... but was it a bad idea? MSRP was $13,000, most sold for double that due to the consumers demand

The Wall Street Journal on March 27th, 1978 had a front page article about what a great investment it was.


So many people jumped on it, that instead of a limited production, and controlled supply to keep the investment value high, Chevrolet made more.

The most ridiculous option I've heard of, the AM FM CB was RPO UP6 - $638.00. One antenna was called on to provide for the AM-FM and CB functions, so its performance was compromised. The AM FM 8 track radio was a $419 option... still ridiculous 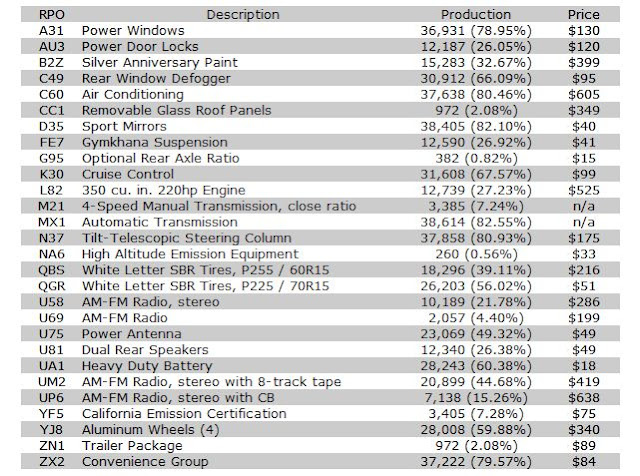 One big improvement was the new temporary space saving spare tire which enabled the installation of a new 24 gallon (previously 17 gallon) fuel tank, increasing the driving range between fill-ups.

One guy bought one, stuck it in storage, and it had a total 13 miles on it. He sold it after storing it for 25 years, and got less than the $50 thou that 2nd owner is asking for it http://www.sellcar-uk.com/news/original-features-in-vintage-cars-can-raise-price/ so he wasted 25 years of space I believe. 25 years, for maybe double your money, but having to take care of a car? Would have been better buying gold. Would have at least tripled his money

The WSJ article stirred up a commotion at dealers who were bombarded by excited buyers. Though some dealers held the line at the suggested retail of around $13,000, many bumped the price north of $18,000. The secondary market high jumped the $30,000 level and some sold at double that figure and more. By race day, Econ 101 kicked in. Fearing legal action from its dealers, Chevrolet decided to build enough Pace Cars to supply each dealer at least one, a tactic that exploded final production to 6,502. Inevitably, supply and demand caught up with reality and by race day, prices dropped like a bag of hammers. http://www.bloomingtongold.com/inc.php?link=greathallcars

Kiss guitarist Ace Frehley bought one, had it for 2 years, gave it to his brother in law for a graduation gift. It was on ebay, and only got bid to 19 thou... with autographs and the famous person link. http://www.corvetteblogger.com/2011/02/18/corvettes-on-ebay-ace-frehleys-1978-corvette-pace-car/

The approximate delivery sticker price on the majority of the Pace Cars was $13,800 for the L-48 and $14,300 for the L-82. As the production date neared, word spread that this could become a very collectible Corvette given that each dealer would only be allocated one Pace Car. The final production number reached 6,502. One for each of the Chevy dealerships, because GM legal told them they had to make one per dealership. SO much for exclusivity, and sellability

The Wall Street Journal ran a front-page story on March 27, 1978, reporting the collectible stories of this special Limited Edition Pace Car. At that time, prices went wild – with asking prices frequently in the $20-25,000 range for the L-48 and L-82 automatics, with the L-82 4-speed commanding up to $40,000. Stories and pictures began to appear everywhere; we even recall seeing a Pace Car in a dealer’s showroom with an armored guard watching over this Special Limited Edition!

Today, the average price of a 1978 Pace Car is $17,600, which reflects no change from the 2001 pricing. However, many of these Limited Edition Pace Cars are available for sale with little or no miles on them, which make them special buys. It is interesting to note that today’s average prices exceed the window sticker price in 1978!

Today, the Pace Cars with limited mileage continue to bring top dollar. A L-82, 4-speed Pace Car with less than 100 miles was recently sold for $31,000. Another Pace Car with the L-48 motor and automatic transmission with only 4 miles sold at the “low price” of $20,750 at Bloomington Gold last year.
http://www.vettefinders.com/index.cfm/fuseaction/corvette.Vette101Story/ID/28