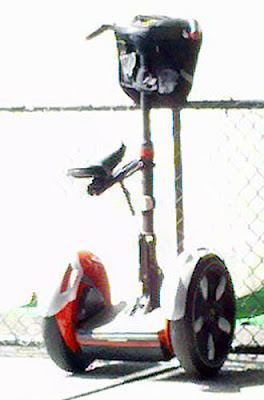 The below seat can be seen at http://www.segseat.com/ and purchased for about 500 bucks 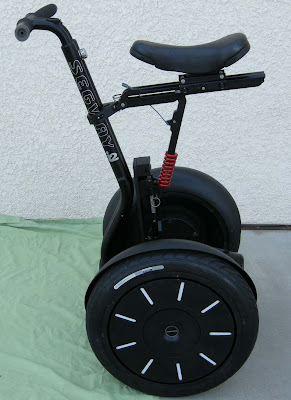 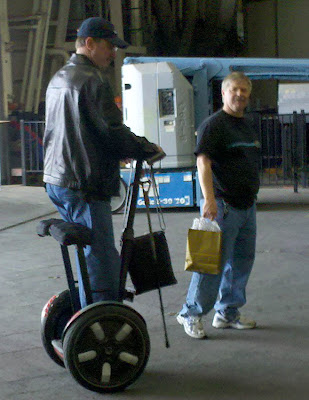 Just check the seating custom changes... this is what enables anyone with leg problems to utilize a Segway and have upright mobility. Both of the seats will flip up or down to get out of the way when getting on or off the Segway.
Seventeen severely wounded warriors received a custom modified Segway, the personal mobility device, at a ceremony on the forward deck of the historic USS Midway.
Segs4Vets recipients use the Segway instead of a wheelchair and say the Segway allows them to stand tall in their prosthetic legs, improves their mobility and lets them appear less disabled in public.
The recipients included nine soldiers, two Marines, two national guardsmen, two airmen and two sailors. They come from Guam , Washington, D.C. and a dozen states, including California. Many are still undergoing treatment and rehabilitation at the Naval Medical Center San Diego.
Segs4Vets, a project of Disability Rights Advocates for Technology, a non-profit organization rated as one of America’s best charities, (one of 2,000 out of 1,000,000 charities in America) returned to San Diego for the third time to make the presentation.
The recipients sustained serious injuries which limit their mobility during combat in Iraq and Afghanistan. The Segway dramatically improves personal mobility for military service members who lost limbs to amputation or suffer from spinal cord injuries, neurological injuries and soft tissue damage.
``Those who become disabled while serving our nation deserve the best tools available to live productive and fulfilling lives,’’ said Jerry Kerr, president and founder of DRAFT. ``The Segway has proven its value to more than 400 wounded warriors and we are delighted to provide this device to these brave military service members to help them fulfill their dreams.’’
Several former recipients who attended the ceremony included John Hyland, a former Army soldier and trained opera singer who will sang the National Anthem at the ceremony, and Kortney Clemons who is training for the Paralympic Games at the Olympic Training Center in San Diego. Two of the earliest recipients used their Segways to complete undergraduate studies at Georgetown University and are now attending law school.
More than 33,000 men and women in uniform have been wounded in Iraq and Afghanistan since the beginning of hostilities. The Segway is not covered by military medical insurance.
Segs4Vets, created in late 2005, is run entirely by volunteers as part of Disability Rights Advocates for Technology (DRAFT), a 501c3 created to represent people with disabilities who refuse to be defined by their disability and whose passionate enthusiasm for participation in life’s activities is supported by Universal Design and new and emerging technologies. The organization is a member of Military, Veterans & Patriotic Service Organizations of America and has been certified as one of the best charities in America by the Independent Charities Seal of Excellence, an honor accorded fewer than 2,000 of the more than one million public charities in the United States.
DRAFT is the only organization to ever receive a blanket waiver from the U.S. military allowing a gift in excess to $1,000 to severely injured active duty military force members serving in Iraq and Afghanistan.
at Wednesday, March 24, 2010