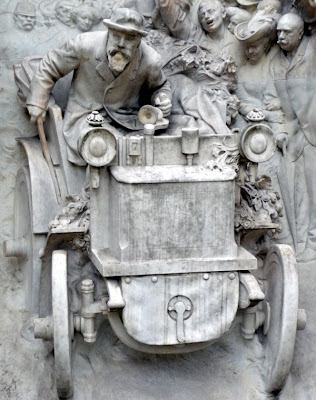 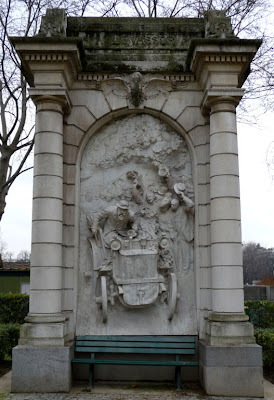 Emile Levassor; Pioneering car inventor, racer, and victor of the Paris-Bordeaux-Paris 1895 enduring 48 continuous hours of virtually nonstop driving, a feat possibly not yet repeated. Ok, it was at an average of 15 mph, but that was incredible for 1895.

This monument (raised in 1907) is likely the most grandiose tributes ever erected to an automobilist.

On November 26, 1907, a stone monument was inaugurated square Parodi, boulevard de l'Amiral Buix in Paris XVI °, in honor of Emile Levassor and pioneers of the industry and motorsport.

The sculptor Jules Dalou represented Levassor driving the car on which he had won the race Paris-Bordeaux-Paris. This monument, funded by public subscription, was presented to the City of Paris.
http://fr.wikipedia.org/wiki/%C3%89mile_Levassor

(StillOutThere commented contrary, disagreeing about the monument... fact check before you post a disagreement on facts, I'm always wrong in my opinion, just ask my girlfriend... but rarely about facts StillOutThere... )
at Saturday, March 27, 2010