Marmon Herrington since 1851: 4 wheel drive and beyond, makers of busses, tanks, and the Rhino... never heard of the Rhino? 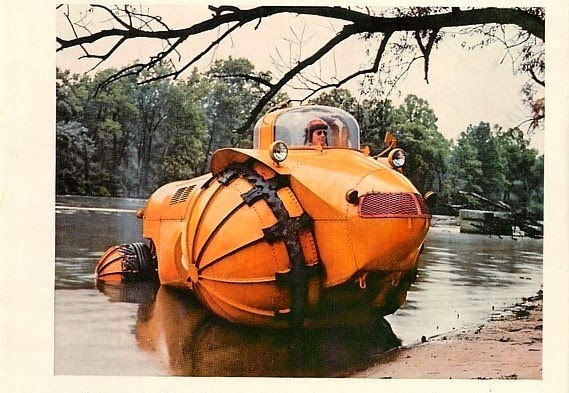 above image found on http://bangshift.com/blog/bangshift-trivia-do-you-know-what-the-hell-this-is-we-do.html 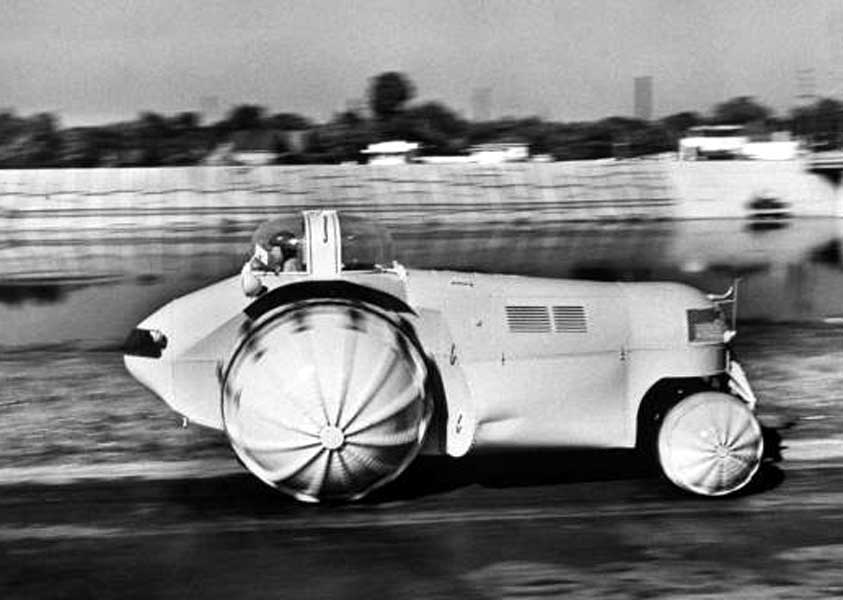 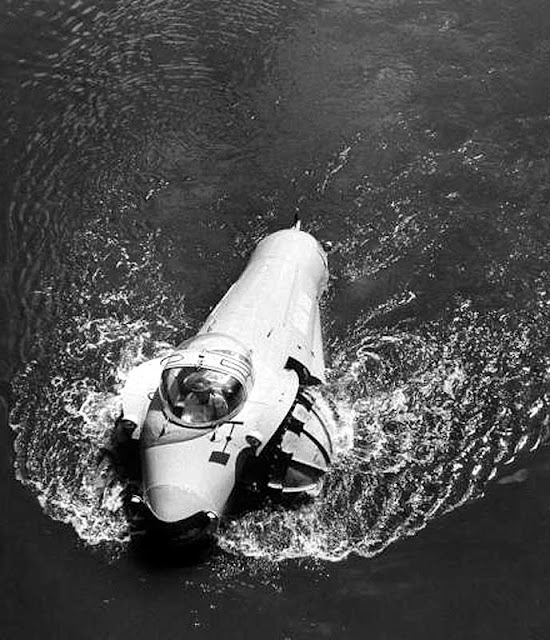 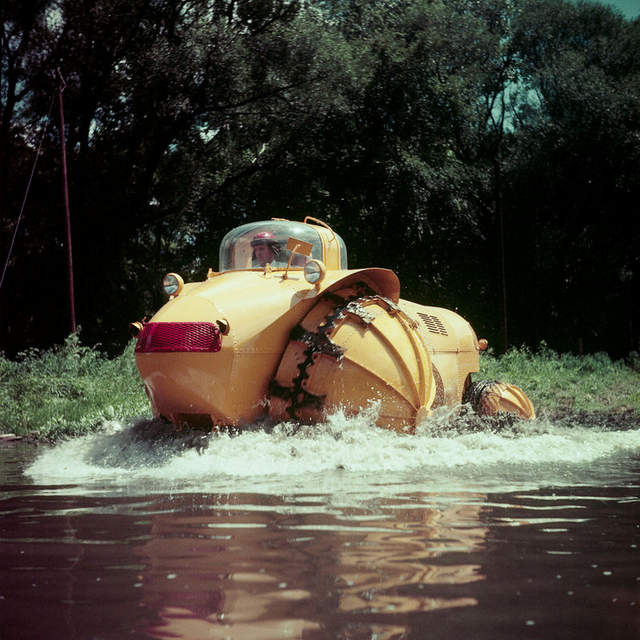 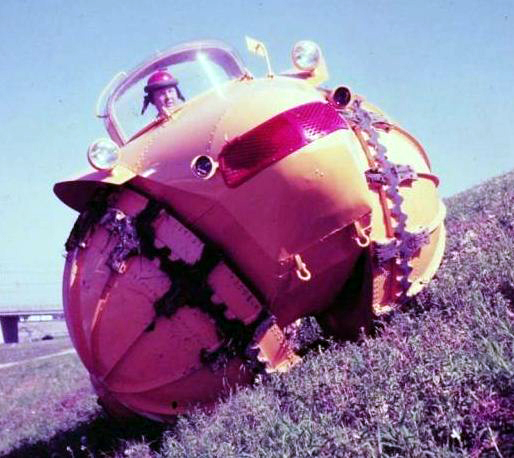 For the best write up and photo gallery see the Popular Science October 1954 pages 125, 126 and 127 ... Since none of us have that issue, go right here for Google (thanks Google!) who has a library scanning project underway: http://books.google.com/books?id=GCEDAAAAMBAJ&pg=RA2-PA26&lpg=RA2-PA26&dq=Marmon-Herrington+rhino&source=bl&ots=cPP0J40U4f&sig=PhUp8XzQuE3aQ0Rg6AKZX9FcKs0&hl=en&ei=27UWS8qDLM7jnAfKovHOBg&sa=X&oi=book_result&ct=result&resnum=9&ved=0CCgQ6AEwCA#v=onepage&q=Marmon-Herrington%20rhino&f=false 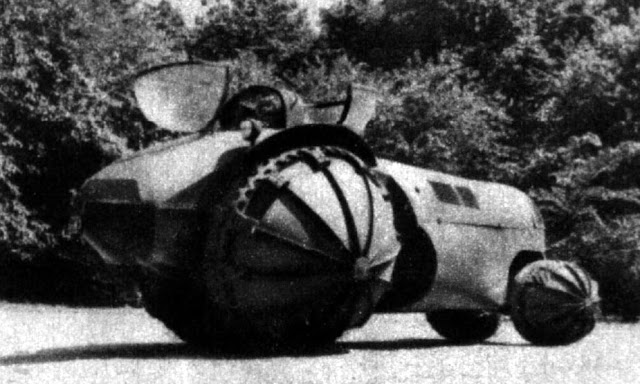 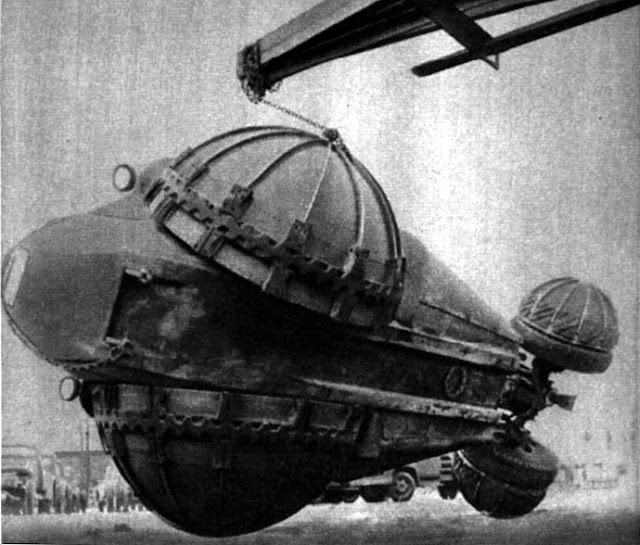 
The Rhino was invented by E. Aghnides, naturalized American frem Greece, and he made a lot of money by his inventions and had Marmon Harrington build the Rhino... it took them 5 years. The front wheels weigh 1500 pounds each and are 6 feet tall, and are hollow rubber clad in aluminum. The hemisherical shape of the tires has a fascinating integral property... the deeper they sink into sand or mud, the more weight bearing surface they provide in contact, and the more traction they then have.


The Rhino could barely be tipped over as the side angle it would remain stable at went to 75 degrees, and could assail a 65 percent grade... it had 12 mpg, was watertight, and was propelled in water by a directional nozzel, was made of Aluminum, and was rear wheel steered


It was featured in issue #16 of Wheels and Tracks, and that can be ordered from Capricorn books at http://www.antiqbook.com/books/bookinfo.phtml?nr=1204493643&Language=en for about 10 dollars 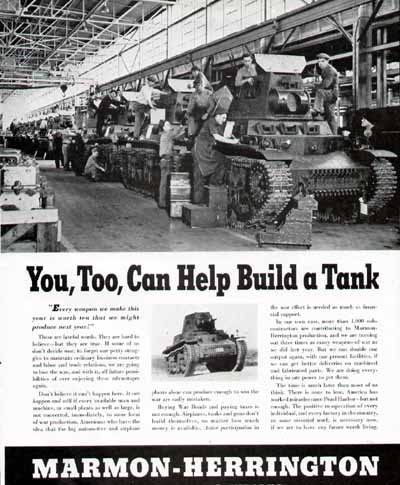 For all about the tank part of MH: http://www.overvalwagen.com/tanks.html 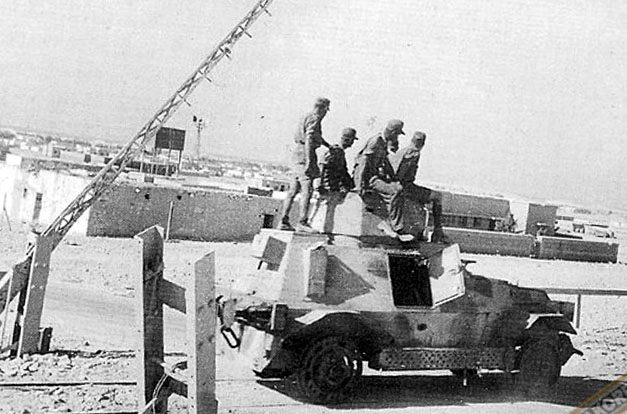 Via: http://www.afrikakorps.org/marmonherrington.htm
Marmon might be a familiar name, I just recently posted about the Marmon Wasp, 1st winner of the Indy 500 http://justacarguy.blogspot.com/2009/08/winner-of-first-indianapolis-500-race.html


A leader and innovator in design, engineering, and manufacturing since 1851, Marmon Herrington made a variety of 4 x 4 and 6 x 6 vehicles for the US and Persian armies used as general load carriers, mobile machine shops, wreckers and balloon winch trucks. Reconaissance, scout and armored cars were also made, some with 4-wheel-steering as well as 4­wheel-drive.

In 1932 Marmon-Herrington built the first all-wheel-drive truck and trailer combination for oil pipe construction in Iraq. Also in 1932 there was a very special project, a 40-passenger articulated coach ordered by the Nairn Brothers for the Damascus to Baghdad desert run. The 6 x 6 tractor was powered by a 90 hp 6-cylinder diesel engine and fitted with a sleeper cab. This was coupled to a luxurious tandem-axle coach 66 feet long, the combination weight being 30 tons. Air springs were added to the tractor's front. semi-elliptic springs. This freighter-bus was still in service during World War II, now operated by the Royal Air Force.


The tractor trailers they made are prized by truckers, and were made from 1969 to 1988 in Garland Texas... for a great article read: http://www.etrucker.com/apps/news/article.asp?id=60955 the 2nd story