133 year old Hammersmith Bridge, developing cracks, exacerbated by the heat wave, has been shut down to pedestrians now, and on top of everything else, this is just killing businesses that rely on the foot traffic 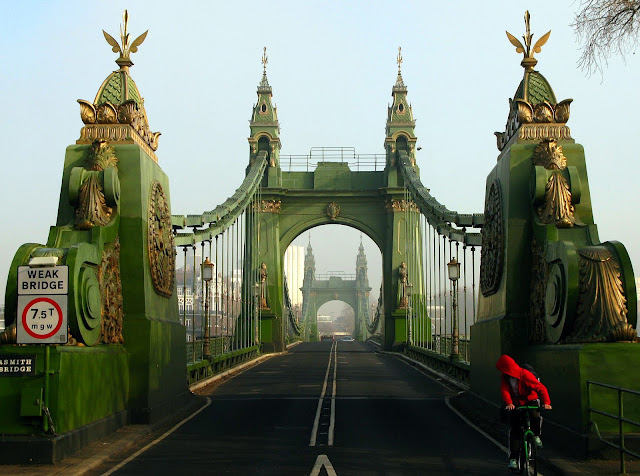 Hammersmith Bridge, an 1887 cast iron suspension bridge that crosses the River Thames in west London. Designed by Sir Joseph Bazalgette, whose most famous achievement was designing a sewer network for central London and embanking the Thames, thus eradicating Cholera.
The four sets of chains for the bridge are made of mild steel, with links approximately 230mm by 25mm held with 150mm diameter steel pins. 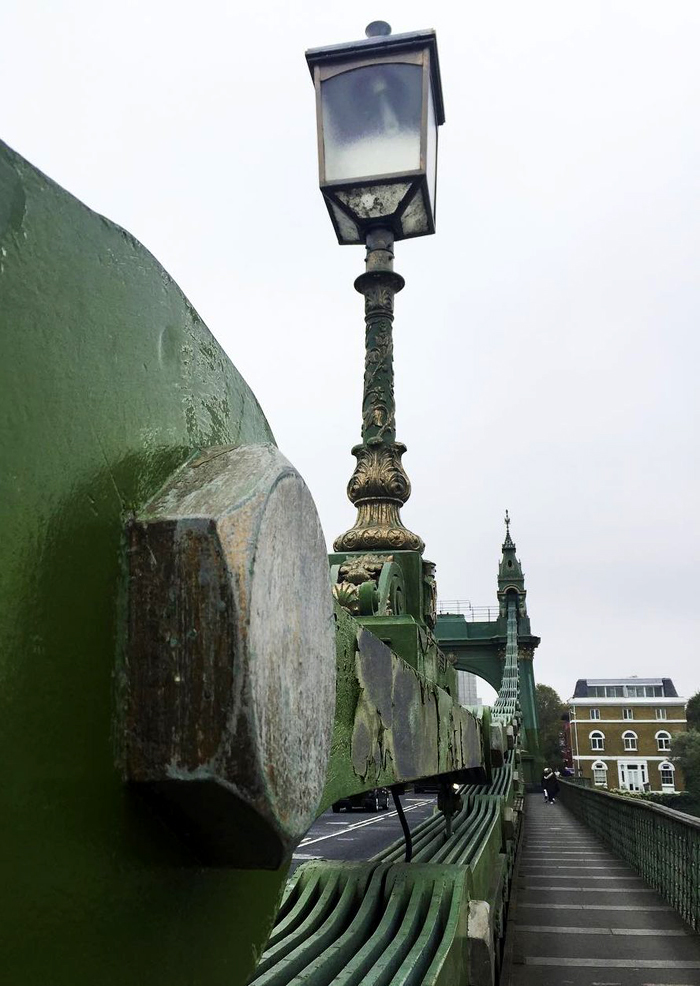 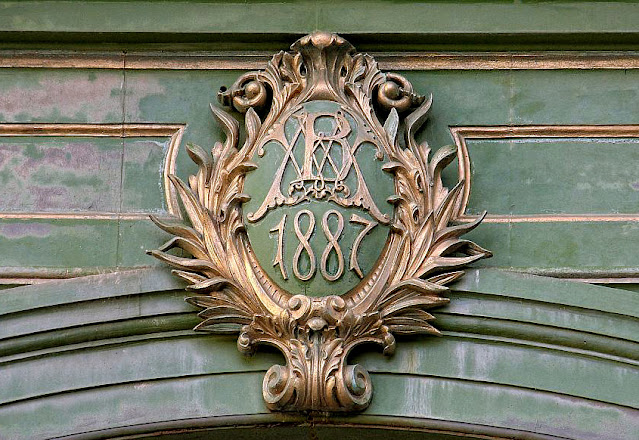 It was built in considerably basic terms of construction. Indeed, it is an iron/steel structure with a road deck built in wood, using readily available second hand railway sleepers. 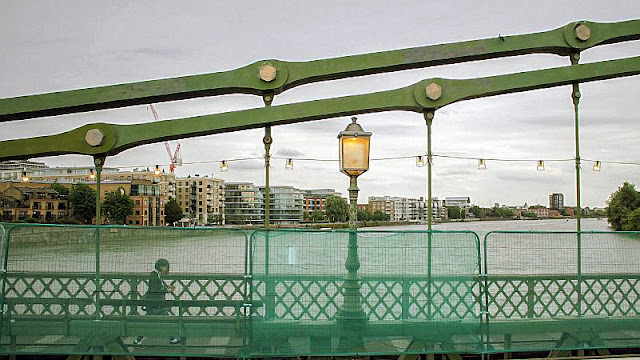 Notice the river view above proving that the Thames has half as many bridges as the Seine in Paris
It was a quick replacement for the older bridge that stood there and a means of continuing to provide bridging across the Thames at this important location. No-one expected anything above the tare weight of a substantial horse and cart! 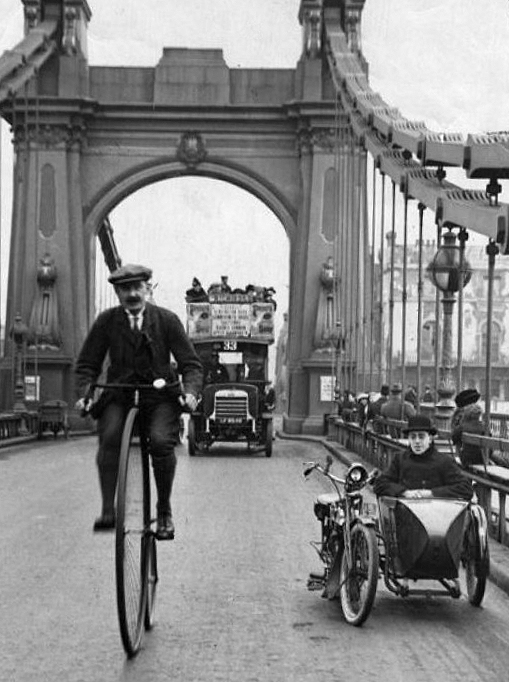 But 3 attempted IRA bombings, and 13 decades of increasingly heavy loads unimagined by it's 1890s era designers... 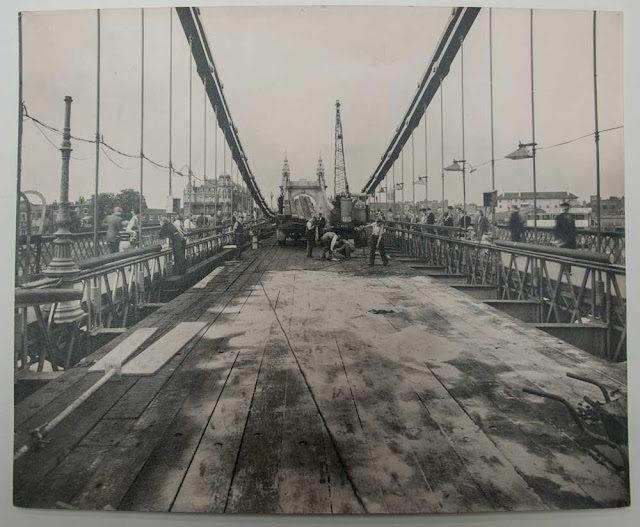 What is most surprising is compared to other suspension bridges of substantial historic note, this one has kept its wooden deck! Its absolutely amazing that this wooden road deck has remained well into the 21st Century carrying loads far beyond what were originally envisaged. 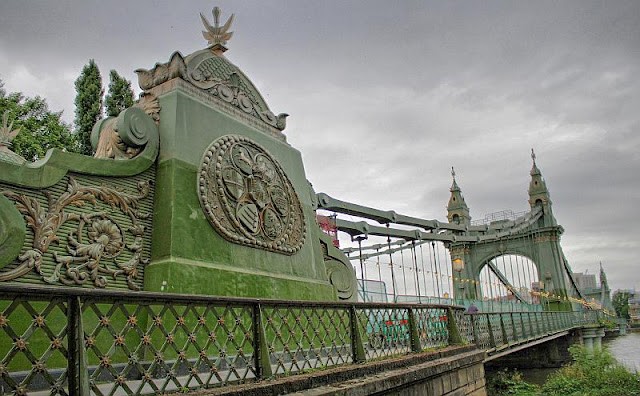 Looks like it's from the Land Of Oz to me, just beautiful! 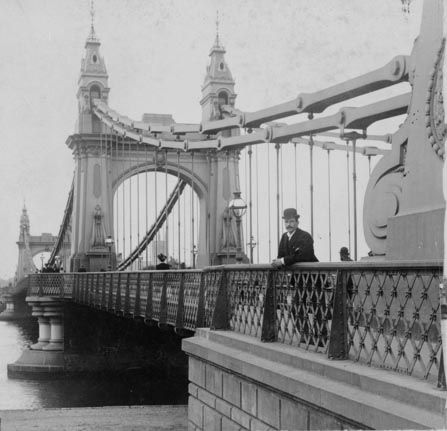 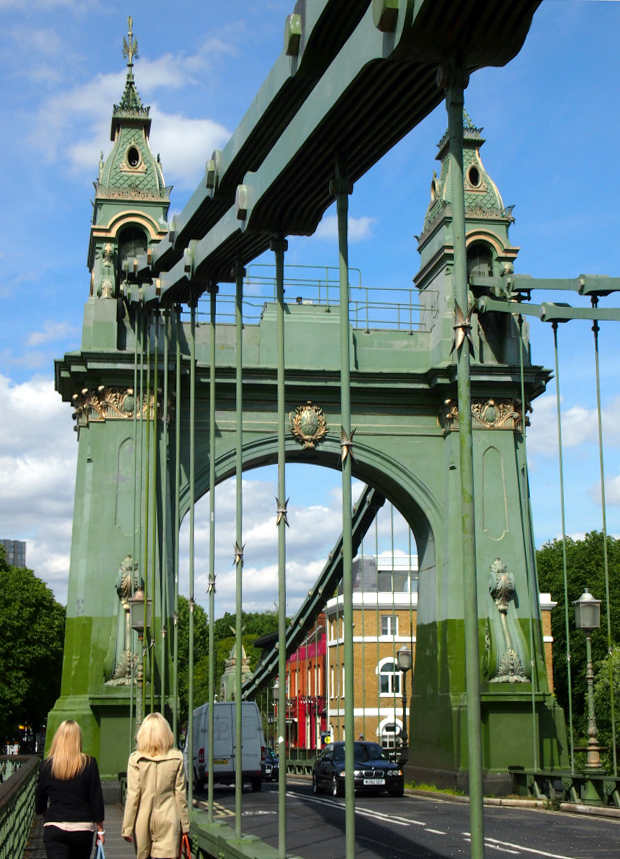 The bridge was first closed to traffic in April 2019 when cracks were found in the cast iron structure. 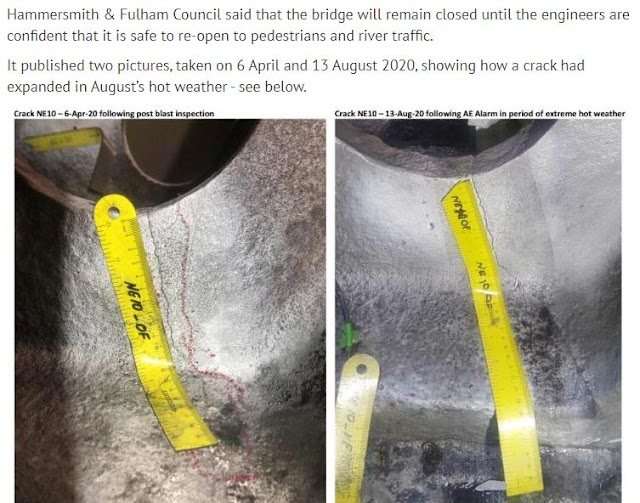 It was shut to pedestrians and cyclists and river traffic in August when they widened in the hot weather.

17,000 people, including 4,000 schoolchildren, once walked across the bridge daily. 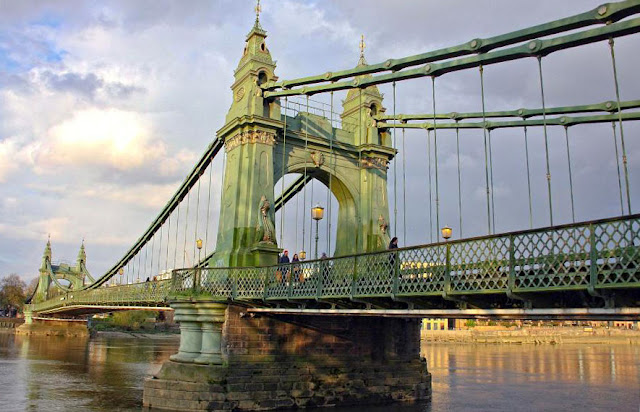 The council, which owns the bridge, says it will cost £141 million for a full repair but £46 million to be able to reopen it safely to pedestrians. The authority and Transport for London say they do not have the money available.

The nearest road bridge is nearly four miles away. School kids who once walked 10 minutes over the bridge to school now cycle 45 minutes, first along a busy road, dragging heavy bikes and bags (school lockers are banned because of Covid) up and down steep steps at Barnes railway bridge.

Then they cross a park where last year there were 35 arrests for violence and sexual offences and 105 for antisocial behaviour.

The river towpath is often flooded, meaning they must bike alongside the six-lane A4.

Every day brings tales of 11-year-olds waiting two hours-plus at stops as full bus after full bus accelerates past. A car trip in the perpetual gridlock also takes 90 minutes, impossible for parents also trying to get to work.

Hammersmith and Fulham council owns the bridge; it’s their decades of negligence which led to it first closing to road traffic 17 months ago and the estimated £141 million repair bill.

It is the only bridge of it's kind in Britain, and one of only two in the world like it, the other is over the Danube in Budapest, the Széchenyi Chain Bridge.

That too was designed by the same guy who conceived Hammersmith bridge – William Tierney Clark.

The difference however that at Budapest is a rebuild of the original which was damaged in World War II, and thus more substantially built to cope with the much heavier modern traffic.

The following image shows how the structure is built and where the suspension chains eventually lead underground.

By the 1990s, structural repairs were necessary. On 3rd February 1997, the bridge closed to all traffic other than buses, bicycles, motorcycles, emergency vehicles and pedestrians. It reopened in 2000, subject to a 7.5 tonne weight limit.
Hammersmith Bridge has twice been the subject of bomb attacks.
At the end of the 19th Century, London found itself under attack from militant Irish Republicans, who wished to see Ireland become an independent state. The Fenians planted many bombs in London between the late 1860s and the 1880s, including the first bomb on the London Underground in 1883. In 1939, the IRA (Irish Republican Army) carried out a campaign of bombings, and the target for one of these attacks was Hammersmith Bridge.
Late one night on 29th March 1939, hairdresser Maurice Childs was walking across the bridge when he noticed a package that was hissing and sparking. The quick-thinking Mr Childs – perhaps thinking of the other bomb attacks on London by the IRA that had taken place in recent weeks – threw the package into the water, where it exploded and sent a huge plume of water into the air. A second explosion caused minor damage to the bridge, and shattered windows in nearby buildings, but the actions of Mr Childs were recognised as having prevented much more damage. The London County Council awarded him 50 guineas, and he was also given an MBE for his bravery.
In June 2000, it was the target of a terrorist bomb. 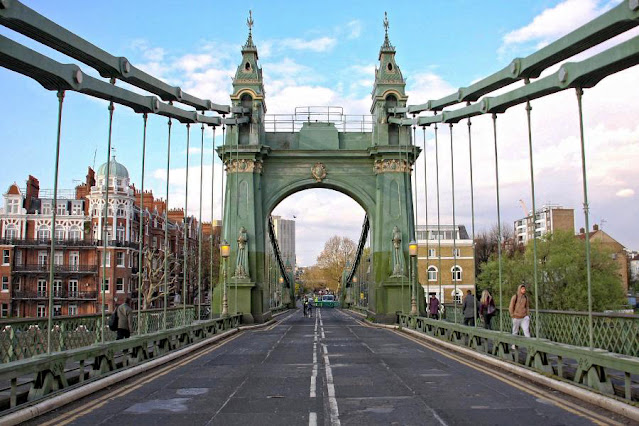 Even Jeremy Clarkson has mentioned it, when referring to his new Ford GT:
"It’s too wide for the width restrictions on Hammersmith Bridge — backing up earned me a slot on the traffic news that morning." 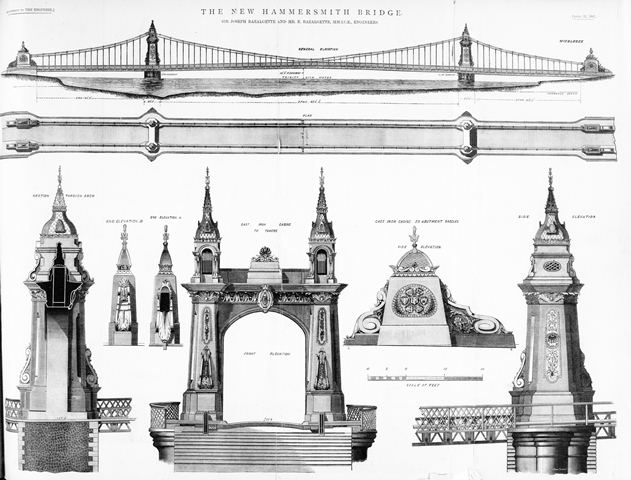 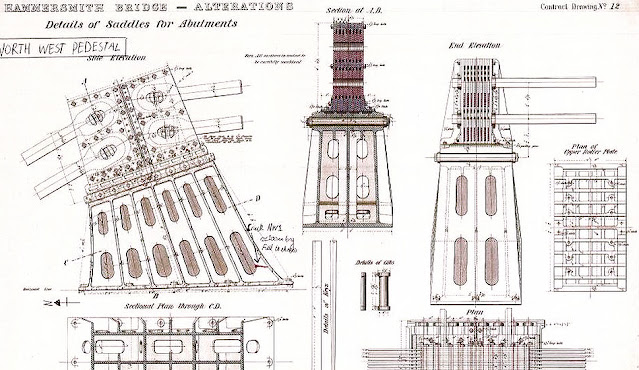 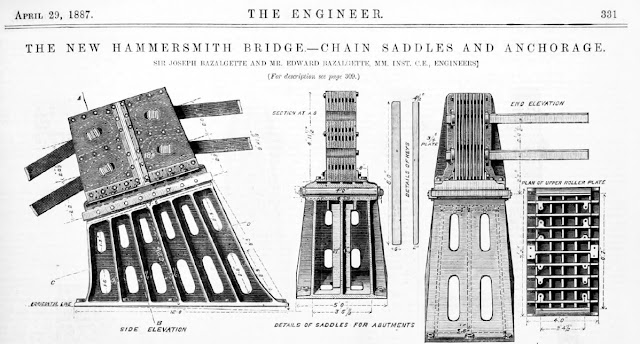 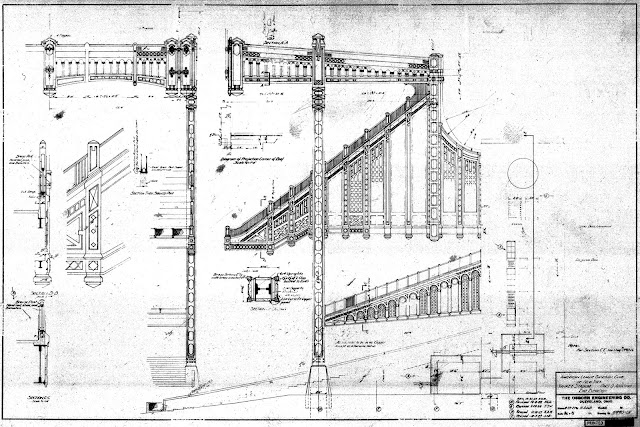