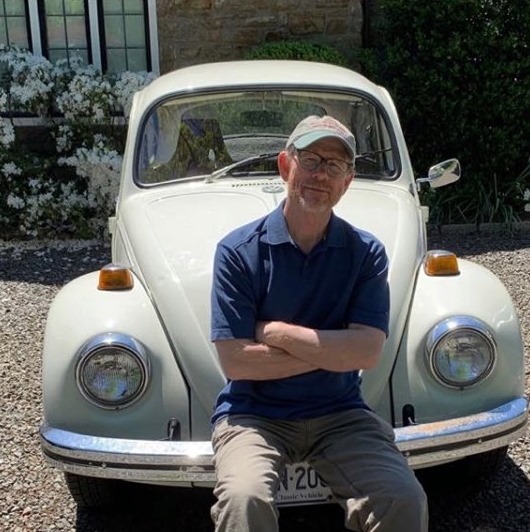 “I got a white Volkswagen Beetle,” he said. “It was my way of saying, ‘Don’t put me in that other box (guys buying Corvettes because they were Hollywood).’” He said that the “very rooted, earthy, common sense approach” of his father kept him “sane and solid.

He went on the 1st date with his wife in that bug, 48 years ago.

During an interview with Playboy, he gave a lot more info:
Actually, the only car I loved was the first car I ever bought: a 1970 VW Bug. I drove it for five or six years and moved on.

Then a few years ago, my brother-in-law found it in Redding, California. It had my college sticker on it. Someone was using it to deliver eggs. So he put a new engine in it and shipped it to me.

That was the car that I courted my wife in. It seemed a lot roomier then, if you know what I mean. We drive it around now and smile with recognition. 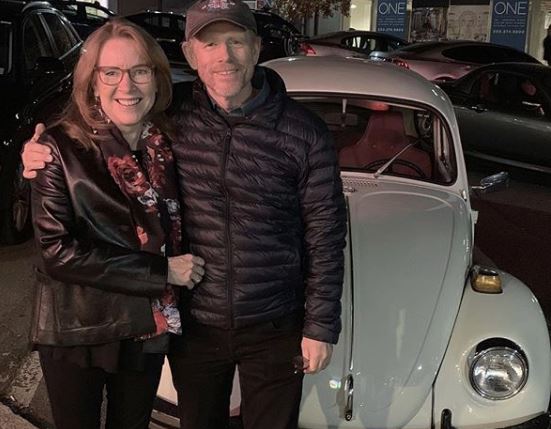 Bette Davis patted him on the butt when she decided he was a good director. (he was 25)
Henry Fonda gave him his first books on film theory.
Lee Marvin got drunk and told him stories about John Ford’s sadistic side.
Vincente Minnelli taught him to be a stickler for detail.
Roger Corman advised him to pursue his own creative point of view in movies, but never forget the crowd pleasers like car crashes and naked women.
Andy Griffith showed him, when he was just a young ’un, how to have fun while working hard.
And Yul Brynner explained that when you take a shot of vodka and bite the glass, it had better be a prop glass made of sugar.

Ron Howard started out-earning his father at age 8 and, by his own calculation, made more than the Dodgers pitcher Sandy Koufax by the time he was 11.

Mr Howard is one of two alive members of the regular cast of the Andy Griffith show, the other is Thelma Lou. He is the only original surviving cast member.


Mr. Howard is also working on a documentary about the aftermath of the wildfire that consumed Paradise, Calif.

“My mother-in-law used to live in Paradise and I have a lot of relatives and in-laws in Redding, California, nearby,” he said. “And suddenly there was this fire that wiped out a town. It’s a survival story. Will the town make it? Will the individuals within the town choose to keep the community together? What does that kind of devastation really feel like?”

Sara Bernstein, an executive vice president in Imagine’s new documentary unit, said that she and Mr. Howard went to film in Paradise soon after the fire.

“People were walking through the rubble of their burned-down homes, their lives destroyed, and yet they were so excited to see Ron Howard in their town,” she said. “They would shout out, ‘Hi, Opie!’ and then pour their hearts out to him on camera. And it really hit me that for the people of Paradise, who have lost every tangible memory of their life, Ron represents a living memory to them. They were not just talking to a world-famous director, but they were opening up to an old friend. And that’s the magic of Ron Howard.”

he has worked with the most famous actors there ever were, Henry Fonda, John Wayne, Tom Hanks, Andy Griffith, Don Knotts, Michael Keaton, Jamie Foxx, Bette Davis, Lee Marvin, Jessica Tandy, Robert DeNiro, Kurt Russell, Harrison Ford, John Candy, Donald Sutherland, Tom Cruise, Mel Gibson, Robert Duvall, Gary Sinise, and Lassie. Why no one interviews him about working with these other actors, I've no idea. Do you have any idea how many people are alive that have worked with John Wayne, Henry Fonda, and Lee Marvin?
at Monday, June 10, 2019