NYPD seems to be getting a pass from major media... but 2 dui cops in a month? And another NYPD cop w/o justification shooting a unarmed non suspect due to road rage? and 3 NYPD plead guilty to bribery? Is there any honest cop in all of NYPD? The NYPD chief should resign in shame and disgust that his dept is full of dirty cops 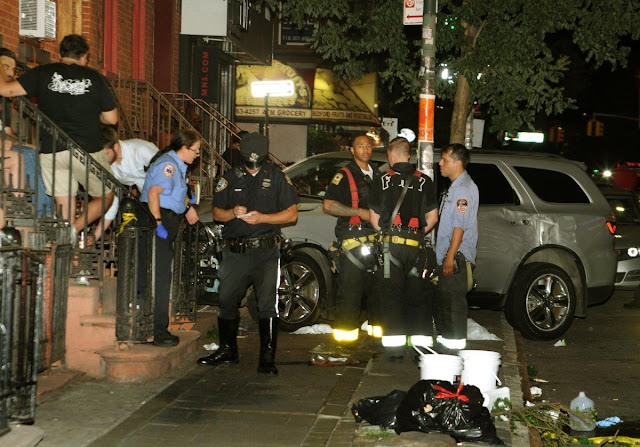 The Durango was seen swerving in the seconds before impact. His runaway SUV tore the leg off one victim and left another impaled on a fence, witnesses said.

The inebriated second-year cop flashed his badge and slipped into his SUV’s passenger’s seat about 3 a.m. Saturday as the mangled victims writhed in agony on a bloodstained sidewalk in Williamsburg.

A cell phone video captured a man in a red shirt wagging a menacing finger at Batka, keeping the SUV door shut tight and the off-duty cop pinned inside.

The sloshed cop was trapped inside the SUV — on the driver’s side by a utility pole he crashed into and on the passenger side by the enraged onlookers.

Responding officers noticed that Clark had bloodshot eyes, slurred speech and the smell of alcohol on his breath at the scene, according to officials. Clark, a nearly 13-year veteran of the force, was charged with driving while his ability was impaired and refusing to take a breath test.

New York’s finest haven’t been doing much better outside their cars. On Wednesday, audio surfaced of an NYPD captain pressuring an inferior officer to engage in racial profiling. Three NYPD commanders were arrested on federal corruption charges June 20. The following day, police in Brooklyn launched an overnight manhunt, which included use of a search helicopter, to find Rhamar Perkins.

Perkins, who is 16-years old, had run away after jumping a subway turnstile.

Now you may have a bit more understanding about why people all over the USA are angry that cops are corrupt, dirty, and no damn good. Or you can look at former LA County Sheriff Lee Baca and undersheriff Paul Tanaka, both getting 5 years federal prison terms for interfering with an FBI investigation on civil rights violations and lying to investigators during an FBI probe of civil rights violations in the jail system - just 2 of 10 cops who have been convicted of intimidating the lead FBI agent, concealing the whereabouts of an inmate, a federal informant, and pressuring deputies not to cooperate with the investigation. Those were the police dept's finest ? and most senior officers !
http://www.latimes.com/local/lanow/la-me-ln-baca-sentencing-20160718-snap-story.html

But that is just the smallest sliver of corruption in NYPD. Deputy Chief Michael Harrington, 50, Deputy Inspector James Grant, 43, and Sgt. David Villanueva, 42, all high-ranking members of the police force, and Officer Richard Ochetal, who previously pleaded guilty to bribery charges in the investigation. The charges are part of wider probe by federal prosecutors and the FBI focusing on police supervisors and whether they engaged in services like police escorts, fixing traffic tickets or shutting down streets for private events. Reichberg and Rechnitz have been generous supporters of New York Mayor Bill de Blasio. Rechnitz was the target of a fundraising investigation until he pleaded guilty to corruption charges several weeks ago.
http://www.upi.com/Top_News/US/2016/06/20/NYPD-officers-charged-in-corruption-probe/8991466437305/
at Tuesday, July 19, 2016