About 40% of all tickets written in San Diego are in just 4 locations, and 2 are basically College student areas 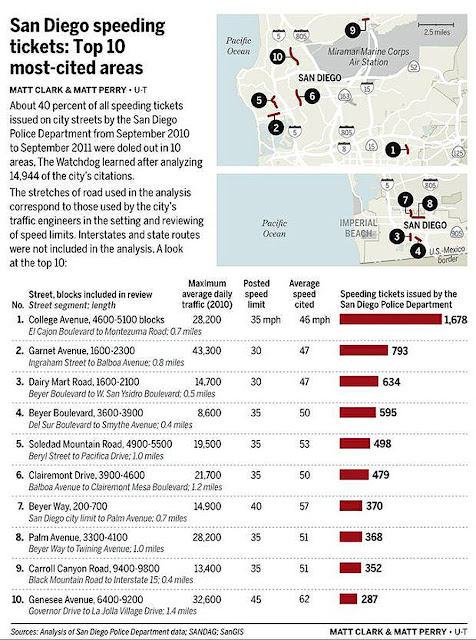 another of the top 5 most ticketed is also in Pacific Beach, coming down Mt Soledad rd to Balboa

So, are cops targetting young speeders? Seems like it. But keep in mind what I posted http://justacarguy.blogspot.com/2008/01/speed-limit-enforcement.html about cops giving speeding tickets, they prefer to ticket in the 2nd or higher price bracket... not in the 5 to 15 mph over, but over 15 mph over the posted speed limit when fines really get expensive... because a million people driving the same way 5 miles over the limit as they do at the limit, versus a few people driving way over the limit who will get fined enormously for driving near or over the limit of their braking and avoidance ability is another way to see the issue, but keep reading to see that it really is all about the money.

So reading on the article, you find that the first one I wrote about, the 11% of all tickets in San Diego, the most of any place in San Diego, are at the bottom of the hills on either side of a speed limit drop zone of 600 feet (for nothing different in the road condition, no schools) because it's a senior citizen residential block where the speed drops from 35 to 25 (again... at the bottom of two hills when you've got gravity speeding you up), and to quote the reporter "Nearly all the tickets were issued in the senior zone when drivers exceeded 40 miles per hour, causing fines to increase by $125 or more."  confirming what I said about the 15 and over ticketing method causing fines to increase by $125 or more.
Using today’s fine amounts, the drivers ticketed on the College Avenue stretch during the year reviewed were fined more than $600,000. If all of the drivers paid those fines — and some do not — the city’s take would be more than $109,000 with the rest going to the county or the state.

Here is where you can see its all about the money... putting in a stop light will cost about a half million, writing tickets will earn about 20% more than that, about $600,000

More than that, the reporter, Matt Clark doesn't hold back.. I like that! He puts the matter in clear perspective when he points out
In the College Avenue zone (the one I've been talking about), 39 accidents occurred and cops handed out 1,678 tickets between July 2005 and June 2010,

Other areas of the city had more accidents — and fewer speeding tickets.

All fired up? Or would you like to read a really good rant about speed traps and how people got fed up and fought back? http://justacarguy.blogspot.com/2011/01/here-comes-rant-moneymaking-speedtraps.html
at Tuesday, December 20, 2011