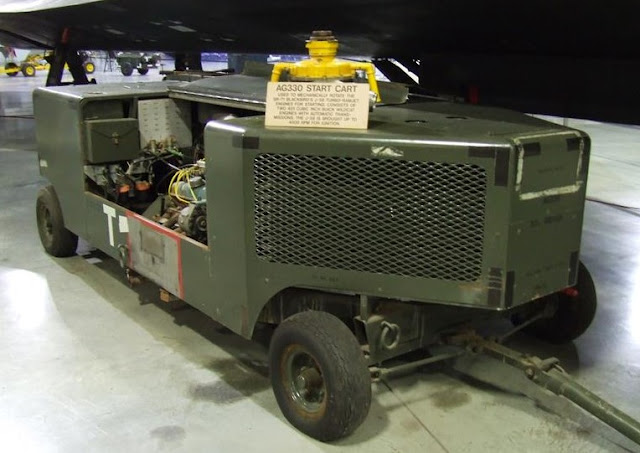 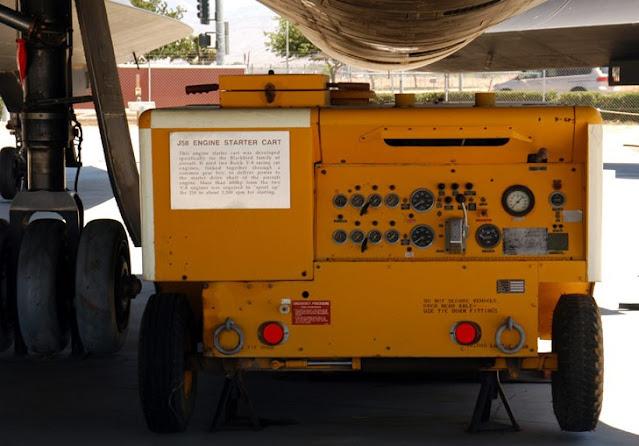 it did not have any mufflers and was just 16 straight pipes routed out the sides.
side by side 425s, with the inboard exhaust pipes routed under the twin engine, so each side had 8 exhaust pipes.
the Buicks were using Avgas, as it's easily available on any airfield
Eventually, these carts were phased out when permanent starting systems were installed in the Beale AFB hangars. This system consisted of compressed air tanks of considerable size that were used to rotate an attached unit.
However, the portable carts were still servicing SR-71s at distant operating locations. Nevertheless, when NASA took over a few SR-71s at Edwards AFB, the starter carts were once again used because the aircraft was started and checked before flight out on the ramp.
It is not known how many of these carts were built, nor how many exist today.
Little information is released on this subject simply because it is not a prime area of interest. These carts are on display in various museums around the country. It is also rumored that some are in storage at key facilities like AMARC (Davis Monthan AFB), and Wright Patterson AFB, OH.
this is an audio file, with images. No video of anything moving
https://www.thedrive.com/news/40294/cold-war-engine-swap-meet-the-1963-buick-wildcat-with-an-a-12-archangel-start-cart-engine
https://www.thedrive.com/news/41268/i-had-to-rev-the-snot-out-of-the-buicks-wild-stories-from-an-sr-71-blackbird-crew-chief
https://bangshift.com/general-news/car-features/buick-olds-pontiac-car-features/ag-330-start-cart-need-fire-off-mother-hot-rods-bring-big-guns/
https://www.thesr71blackbird.com/Aircraft/Engines/starting-the-sr-71-blackbirds-j58-engines-ag330-start-cart
https://www.sr-71.org/blackbird/startercart.php
at Friday, August 12, 2022