the daughter of a taxi driver, 5th of his 6 kids, is the 1st Philippine citizen to win an Olympic gold medal in the history of the Philippines involvement in the Olympics, and is going to receive incredible rewards. Compliments and congrats to weightlifter Hidilyn Diaz! 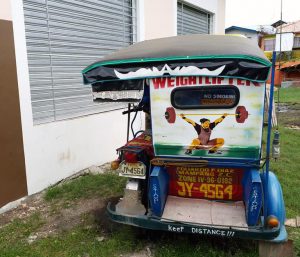 Philippine officials and business tycoons have offered more than 40 million pesos ($800,000) in cash. Others have pledged a residential condominium unit in an upscale district, a vacation house in a resort city south of Manila, a new van and free gasoline, as well as free commercial flights for life.

The decorated athlete (won silver in the 2016 Rio Olympics) and Airwoman of the Philippine Airforce put an end to almost a century-long drought of Olympic gold medals since the Philippines first joined the games in 1924, this was her 4th Olympics
While still at school Hidilyn would go with her father Eduardo on his tricycle to help sell vegetables and fish on the street or at the local market.
Diaz, whom her parents and family members call Hidie, spent her younger years carrying water gallons from a well that was about 70 meters away from their home. Since water supply was not yet accessible to the family’s house, residents in that sitio in Mampang village had to fetch water from this artesian well.
She used to carry water containers in both hands, each weighing five gallons, back and forth. She was eight years old then, a grader at the public Mampang Elementary School.
Then the little girl who would become a national icon started lifting weights made from plastic pipes and homemade concrete weights cast in old tin cans.
Her 57-year old father, Eduardo, was able to stop driving the family’s motorcycle taxi after Hidilyn won in the Rio Olympics.
His tricycle, which bears a painting of Hidilyn lifting a barbell, is being driven by a relative. The family also has a small car which was given by the Universidad de Zamboanga to Hidilyn for winning silver in the Rio Olympics.
https://apnews.com/article/2020-tokyo-olympics-entertainment-sports-lifestyle-health-05253c9d7a6eb0a13f43449fc04b2321
https://olympics.com/en/featured-news/hidilyn-diaz-aiming-for-gold-tokyo-2020
https://www.rappler.com/sports/hidilyn-diaz-carried-heavy-water-containers-both-hands-8-years-old
it reminds me of that awesome emotional commercial from a year or two ago where the rickshaw dad's daughter graduated from university
at Friday, July 30, 2021