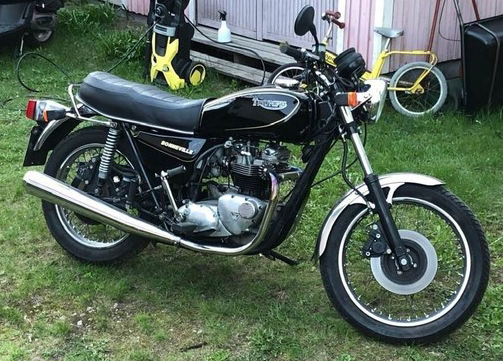 Harris began his own business in 1974 manufacturing and selling spare parts for classic motorcycles. As the leading British manufacturers such as Norton Motorcycles, BSA and Triumph went out of business, Harris bought as many spare parts as he could.  Harris bought all the old tooling, parts and supplies left over after Triumph's collapse

Such was the reputation of the Triumph name, the enthusiasm, and optimism of its most devoted followers that after the 1983 collapse of the Meriden Co-operative-owned Triumph Motorcycles,
two guys put full effort into resurrecting it.

The first was wealthy English homebuilder John Bloor, who bought the Triumph name, manufacturing rights, patents, and trademarks with the intention of reintroducing the Triumph brand as a modern, state-of-the-art company.

The second was Les Harris, a successful supplier of aftermarket parts for the Triumph twins. He wanted to keep producing the venerable old Triumph Bonneville pretty much as it was at the end of 1983. As it turned out, both got their way.

John Bloor licensed Harris to continue building Triumphs from the spare parts, 750 cc Bonnevilles and some of the 750 cc single-carburettor TR7V Tiger models.

It took some time to establish a supply network for the needed components, mostly outside England in Europe.

A total of 1,255 motorcycles were produced before his license expired in March 1988, about 14 bikes a week.

Press coverage of their venture was global and resulted in an invitation to Buckingham Palace and the Houses of Parliament. In 1987 the Harris' were visited by the then Prime Minister Margaret Thatcher.