“So I’ve mostly been flying commercial,” Warren said, explaining that her campaign has been trying to reduce its carbon footprint.

Oops. Hypocrite moment happened when Senator Warren was recorded hiding behind a staffer when she realized she was being recorded using a private jet.

I can't see how it matters, when she's been outed as using the minority quota system to get a university education when she faked being Native American to scam the system

"the Washington Post has revealed that in 1986, when she submitted a registration card to the Texas bar association, she wrote out in block letters "American Indian" under "Race." 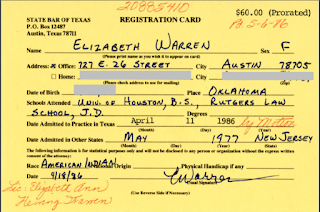 As Senator Warren was once promoted as “Harvard Law School's...first woman of color,” the results seem to only confirm that she misrepresented her ancestry in her past career as a law professor.

"Life on Earth is at risk, and if we don't make this commitment, we not only cheat our children, we cheat their future and their children's future, and that is morally wrong. We've got, what, 11 years, maybe, to reach a point where we've cut our (Carbon) emissions in half?"

"So I think of this as what my mother taught me, and that is you got to clean up your own messes. And that means if you're going to be spewing carbon into the air and messing up the air for the rest of us, it's your responsibility to clean it up."

"... cut 70 percent of the carbon that we are currently spewing into the air. That's how you make a real difference."


"You don't get to ruin the air for everyone else"

"look, there are a lot of ways that we try to change our energy consumption, and our pollution, and I'm in favor of that. And I'm going to help"

"But the point is, that's where we need to focus. And why don't we focus there? It's corruption. It's these giant corporations that keep hiring the PR firms that -- everybody has fun with it, right, gets it all out there -- so we don't look at who's still making the big bucks off polluting our Earth."


Presidential hopeful Sen. Elizabeth Warren addressed the climate crisis and how she would face President Donald Trump on the debate stage if she wins the Democratic nomination during a town hall on climate change hosted by CNN's Chris Cuomo

Federal Election Commission (FEC) filings for the final quarter of 2019 showed that Warren spent $721,000 on private jets in the fourth quarter. Sanders surpassed the entire field, spending $1.2 million, according to reports.

In just the fourth quarter. at that rate, she's spent nearly 3 million dollars for private jet transportation just in the past year.

I'm fed up with lying hypocrites. Vote for whoever you think best serves your needs in office, get whatever you think you deserve to represent your needs as president. Maybe Sen. Warren would be the greatest ally for Native Americans and prevent oil pipelines from going through their reservations.

If you think you've got no better politician to vote for, and are only voting for the least of the worst possible choices, so be it. I'm just glad no one named Hillary will be yowling like a banshee on soundbites any more
at Thursday, February 06, 2020