The Glacier National Park Red Bus Fleet, on duty at the popular Montana tourist attraction since 1936, will be converted to a more environmentally friendly hybrid as part of a total overhaul. 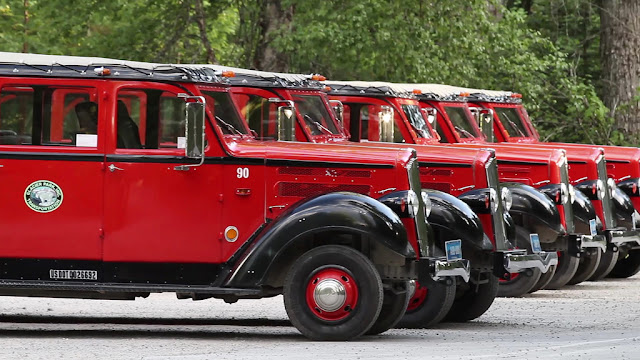 One of the most recognizable modes of public transportation in America is set to be refreshed in the beginning of 2019.

In 2013 the National Park Service put the Glacier’s concessions contract up for bid, to restore a minimum of 15 Red Buses before 2025 and replace the remaining 18 by 2029.

During the first half of the 20th century, the White Motor Company constructed Model 706 tour buses for use on the roads in national parks all across the West. Yellowstone buses were painted yellow. Today, only the Glacier fleet remains and 33 Red Buses are operational in 2013.

35 tour buses were sent to Glacier National Park between 1936 and 1939. Glacier Park Inc. owned the buses until 1999, when they were donated to the National Park Service after Ford rebuilt the entire fleet at a cost of nearly $7 million.

The fleet was last updated between around 1999 via a collaboration with Ford, which included the automaker adapting the bus bodies to E-series Van chassis and propane systems. Since then, each bus has logged between 130,000 and 150,000 miles, averaging 10,000 each year.

Legacy Classic Trucks, Driggs Idaho, will restore and update each bus in the fleet during the park’s off-season months. Every bus will get a new Ford chassis and Ford 6.2L V-8 engine. The powertrain will be bolstered by a pass-through hybrid electrical system that will increase fuel economy and lower emissions by up to 25%, the wheels will be upgraded to 19.5-inch-tall wheels to replicate the original 1930s’ units, and retro-looking gauges will be added to give the buses a period-correct appearance. Bus bodies will undergo rust-repair and be re-painted on an as-needed basis.