the 50 millionth GM vehicle produced, was dubbed "The Golden Chevrolet." No one knows where the gold '55 is or what happened to it. 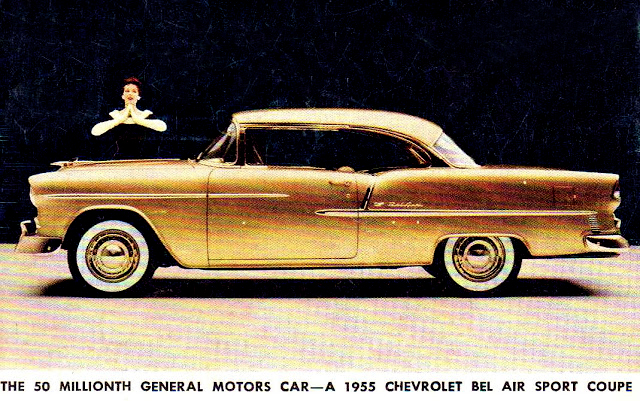 Assembled with the greatest of care at the Chevrolet plant in Flint, Mich., the golden chassis and gold-painted body were mated up and the special car was driven off the line at 10:00 a.m. on Tuesday, Nov. 23, 1954 by Chevrolet GM Thomas Keating, after which he handed the keys to GM Chairman Harlow Curtice.

Most high-ranking GM officials and a number of civic leaders were present. After a brief ceremony, the car was loaded on a float and towed through Flint, much to the delight of onlookers who had packed the streets to see the special Chevy and all the celebrities who were being hauled behind the milestone car in new GM convertibles. 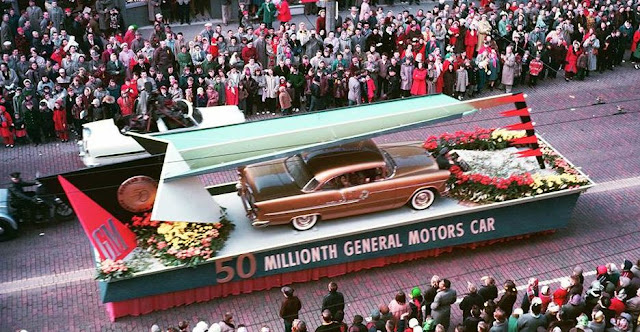 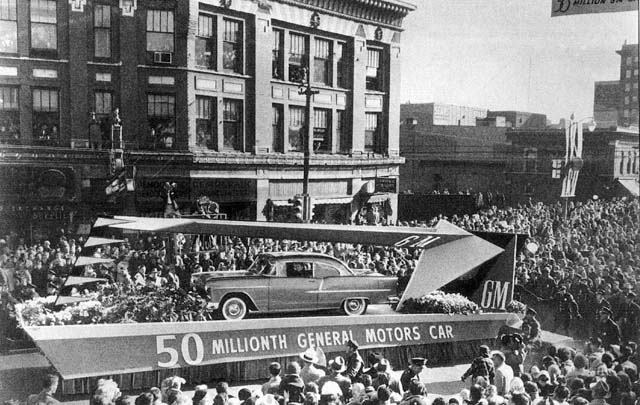 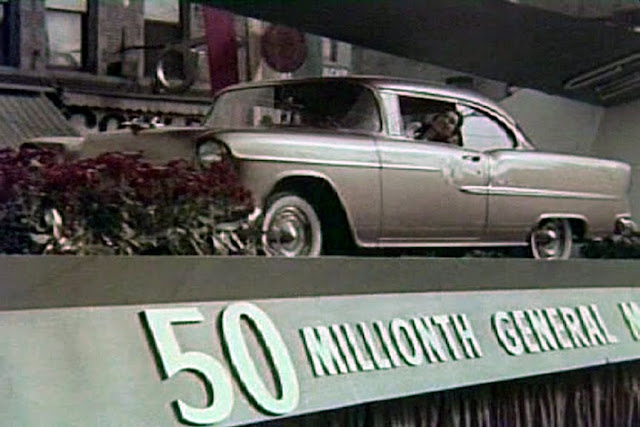 But then Chevrolet commissioned the construction of 5,000 gold-painted Bel Airs to commemorate the 50-million-vehicle performance by itself and all its sister divisions. Naturally, the chrome, stainless and aluminum pieces would remain in their normal state ... no more ultra-expensive gold plating. In addition, possibly to preserve the sanctity of the very special Sport Coupe, all 5,000 commemorative models would be four-door sedans. And they could have any combination of equipment, including engine and transmission.

The Chevrolet Bel Air two-door hardtop including its chassis was painted Anniversary Gold and had 716 trim parts plated with 24-carat gold along with a duplicate set of replacement parts for repairs if necessary.

The interior was color-keyed to the exterior and had the 50-millionth commemorative medallion made for the event attached to each door panel. Chevrolet also offered the Anniversary Gold paint color as a limited option (reportedly just 5,000) for four-door models only. The 50-millionth car not only appeared at the “Golden CARnival” parade in Flint, but also at the GM Motorama. 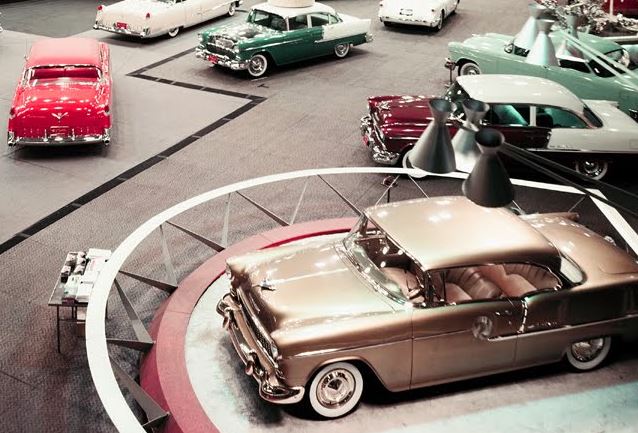 General Motors even painted one of their diesel locomotives in Anniversary Gold with the special 50-millionth car logo as part of the celebration. 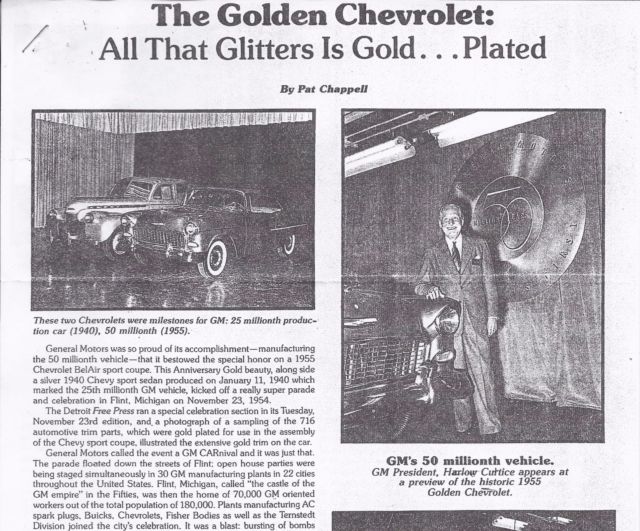 The unique Anniversary Gold Bel Air two-door hardtop became privately owned at some point after its days of generating publicity for GM came to an end, and this new owner had a different 1955 hardtop he was planning to restore.

He learned of some guys who were building another 1955 hardtop into a race car so he to see it. Extensive modifications were nearly underway when he found it to be in better condition than the car he had and planned to restore, and the gold side trim and gold hood ornament bird was still on it. The rest of the trim parts were inside the trunk. Since this car in good condition was about to get chopped, he suggested swapping cars, so he could restore a the better one and they could cut on the rusty one.

After getting the car home and beginning the dismantling process, he also found a special plate on the firewall, so he called Tom Trainor who worked for GM for 30 as a Chevy hobbyist. Tom found that the VIN on the Bel Air matched that of the 50-millionth GM car.

The guy that owned it is Bill Edney, of Columbus, N.C. who passed away Nov. 2011, and was a founding member of the Carolina Nomad Club.  Bill saw the car was going to become a race car.  The car was Black and white and was offered for 400 dollars. It had factory A/C and power everything. It was later that he learned that there was only one sport coupe done and its the gold one in the parade and in the promo movies. But Bill started the replating, buying nice NOS trim to do it with.

The golden anniversary 55 hardtop came to GM's attention and in 2002 GM offered to restore the car for him if they could use it for promo for the 2005 anniversary but he was afraid that he would not get it back. So it was still sitting and awaiting restoration. As a side note, an original license plate that was on the car was on ebay a couple years ago. It had 50 000 000 in raised numbers and there were some penciled notations on the back of the plate.

After Bill died, I haven't learned yet what happened with the car

It took less than a decade to cross the 75 million threshold in 1962, and just five years to reach 100 million.

GM was the largest automaker in the world in 1967, providing jobs for 740,000 people in America, who built cars for 50% of the American market.