the movie the Dukes Of Hazzard was based on "Moon Runners" 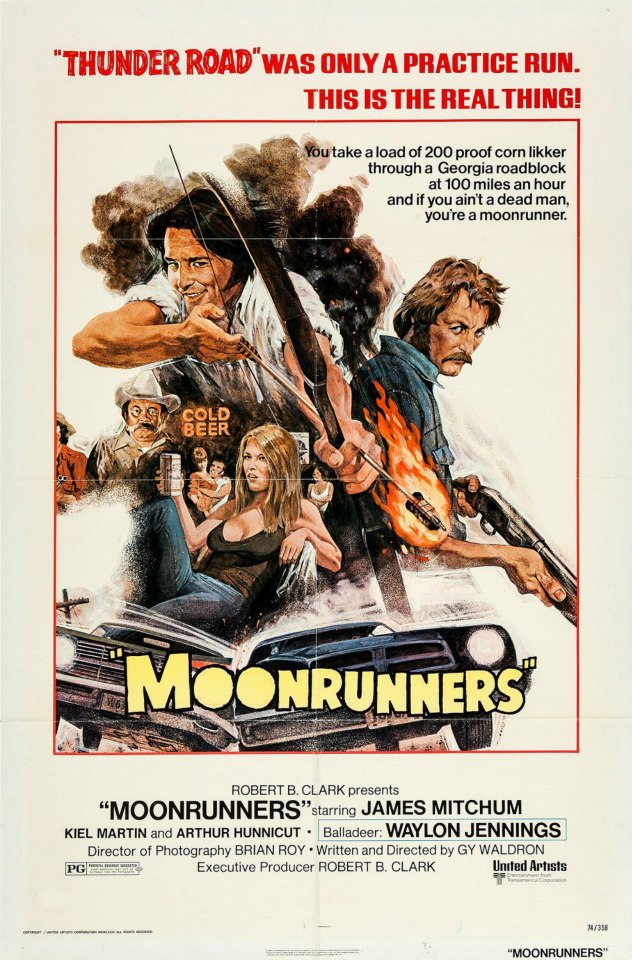 "Moonrunners" is a 1975 film starring James Mitchum, which would be reworked several years later into the popular long-running television series "The Dukes of Hazzard,"

Mitchum had co-starred with his father, Robert Mitchum, in the similar drive-in favorite Thunder Road eighteen years earlier, which also focused upon moonshine-running bootleggers eluding federal agents with fast cars. The movie was filmed in 1973 in Williamson and Haralson, Georgia, awaiting release for over a year, and was a B movie released during the outlaw music boom of the 1970s that was reflected in many movie releases.

The film was written and directed by Gy Waldron, based on the life and stories of ex-moonshiner Jerry Rushing, who has a small role in the movie as a heavy at the Boar's Nest bar. It is listed in the book The Greatest Movie Car Chases of All Time.

The story is narrated by the Balladeer (Waylon Jennings), who introduces and comments on the story of cousins, Grady and Bobby Lee Hagg, who run bootleg liquor for their Uncle Jesse of Shiloh County.

Uncle Jesse is a Baptist, who knows the Bible better than the local preacher. He has been a widower since Aunt Libby died ten years ago. He still makes liquor, according to his "granddaddy's granddaddy's" recipe, in stills named Molly and Beulah. Every drop is aged two years, and bottled in glass (never plastic). The Haggs have been making their recipe since before the Revolutionary War, and Jesse only sells to a friend in nearby Florence to ensure that his liquor is never blended with any other.

Bobby Lee (also called just Lee) is a smart-mouthed schemer, named for the Confederate general. In the opening, Bobby Lee gets tossed in the Pikkens County jail for a bar fight at the Boar's Nest. On his way home he helps out Beth Ann Eubanks, who is on the run from family trouble in Mississippi. Uncle Jesse takes her in, and Lee courts her.

Grady is a laconic "Romeo" who drives their stockcar (#54, named Traveler after General Lee's horse). It is briefly mentioned that Grady probably has a number of children around Shiloh and Tennessee (In the pilot episode of The Dukes of Hazzard, "One Armed Bandits", Bo half-jokes that half of the children in the local orphanage could be cousin Luke's, though this and similar concepts were quickly dropped as the series found its more family-friendly tone).

The cousins take Beth to the next race at the local track. The other stockcar drivers include good ol' boy Zeebo, and Zeebo's lackey Cooter Pettigrew. Zeebo (driving #31) and Cooter (driving #28) team-up to beat Grady in the race, leading to a moonlit bootlegger road race between Bobby Lee and Zeebo.

The county boss is Jake Rainey, a friend of Jesse's from the old days (they both bootlegged for Jesse's father in 1934), who owns the local bar/brothel. Jake has control of all the other moonshine in the county, and sells it to the New York Syndicate (mob). He needs Jesse's supply to fill an order, but Jesse will not sell to Jake since Jake would mix it with lesser quality liquor.

To get at Jesse’s supply, Jake uses Sheriff Rosco Coltrane, to harass the cousins. At the same time he uses Zeebo, and Reba (Jake’s wife who is having an affair with Grady) to goad the boys into a trap. During these events, Uncle Jesse calls Jake "hog" (effectively making Jake "Boss Hogg") as a put-down. After Uncle Jesse passes away after attempting to make a moonshine run, the cousins, who are on probation, and cannot own guns, use a bow with explosive arrows to put Jake Rainey's moonshining factory out of business.

Connections To The Dukes Of Hazzard

A number of names, places and situations went from the film Moonrunners to the series The Dukes of Hazzard with little or no alteration.

Waylon Jennings is the "Balladeer" in both film and series.

The Boar's Nest is a tavern in the film and the series.

Although the crude elements are much toned down for the TV series, the relationship between cousins Bo and Luke Duke is much the same as cousins Bobby Lee and Grady in Moonrunners.

Uncle Jesse is the family patriarch. In both he is a widowed, bearded moonshiner, with strong religious beliefs, raising his nephews. They also have similar costumes, with dungarees over a shirt.

Both feature a corrupt county boss (Jake Rainey/Boss Hogg) who used to run moonshine with his old friend Uncle Jesse. In both, the county boss now owns the local tavern and many local businesses, and through bribery the local law enforcement. As with the television series, their opposing views and Jake's corrupt, dishonest ways make the Haggs and Rainey adversaries, just as the Dukes and Boss Hogg would become in the series.

Sheriff Rosco Coltrane is a once honest officer, who turned to corruption with the county Boss after being cheated out of his pension. This theme carried over into the TV series, before fading away by the end of the first season. Much of the Balladeer's dialogue introducing Rosco in Moonrunners is identical or very similar to that used for Rosco's first scene in the opening episode of The Dukes of Hazzard. Also to note is that the name "Rosco Coltrane" followed directly over from Moonrunners to The Dukes of Hazzard with the character's middle initial of P. not being added until the start of the second season.

A fellow stockcar driver in Moonrunners is named Cooter; There is little similarity between this Cooter and the TV series' character of the same name (in Moonrunners, Cooter even tries to sabotage Grady from winning a stock car race, whereas the TV Cooter was the Duke family's best friend), although the TV Cooter competed in stock car races on occasion. However it can be noted that in the very early episodes of Dukes, Cooter, while still a friend of the Dukes, was more of a rebellious wildman, who in one episode ("Mary Kaye's Baby") is even seen to be running moonshine for Boss Hogg just for the money, which is more in tone with the Cooter seen in Moonrunners.

In both the film and series, the boys have a very talented mechanic friend. The film's unseen character of Virgil (Virg) can fix cars "...so even the factory wouldn't know." In the series this characteristic was given to Cooter Davenport.

The boys are out on probation for running moonshine. In both the film and the series they use hunting bows tipped with dynamite, since they are forbidden to use firearms. Uncle Jesse however, is able to use firearms and is occasionally seen with a shotgun or rifle.

Also to note is a connection that skipped the Dukes TV series but re-appeared in the 2007 TV movie The Dukes of Hazzard: The Beginning, which followed on from the 2005 big-screen movie incarnation. In Moonrunners, Grady is having an affair with Jake's wife; In The Beginning, Luke embarks upon a liaison with Boss Hogg's flirtatious wife Lulu, albeit as a distraction while Bo searches the house. To note is that this movie and the 2005 one proceeding it used little source material from the TV show and its origins, so this "connection" is likely to be a coincidence.

Other names or roles were altered, while still keeping recognizable connections.

In the film, Uncle Jesse and the boys have the surname Hagg. In the series their antagonist, the county boss, has the surname Hogg.

In the film Beth Ann is an honest but slightly naive young woman in trouble taken in by the Haggs. The character has many similarities to Daisy Duke, who is an actual member of the family. (The casting call for Daisy even requested a blonde, a la Beth Ann; it wasn't until Catherine Bach won the part that the character was changed to brunette)

Uncle Jesse's mule in the film is named Beauregard. This name would be given to Bo (Beauregard) Duke in the TV series.

Actors who appeared in Moonrunners and The Dukes of Hazzard

Ben Jones appears as Fred—a revenue agent after the boys—in Moonrunners, and as their best friend Cooter Davenport in the series.

C. Pete Munro appears as "Zeebo" in Moonrunners, and as "Willie" in the season two episode "Jude Emery".

Bill Gribble appears as "Cooter" in Moonrunners, and as "Carson" in the second episode "Daisy's Song".

Jerry Rushing appears as Jake Rainey's bodyguard in Moonrunners, and as crooked used car salesman Ace Parker in the fourth episode "Repo Men". Rushing understood the role of Ace in Dukes to be a recurring one, in return for him supplying creative ideas and content from his moonshining days (Rushing has stated that the character of Bo Duke is very much based on him); however the character only ever appeared in the episode "Repo Men", never to be seen or mentioned again in the series, leading to a legal dispute between Rushing and Warner Brothers for some years afterwards.