humans, wheels, and engines. Put them all together and what do you get? The motor wheel, the focused culmination of the human desire to be fast 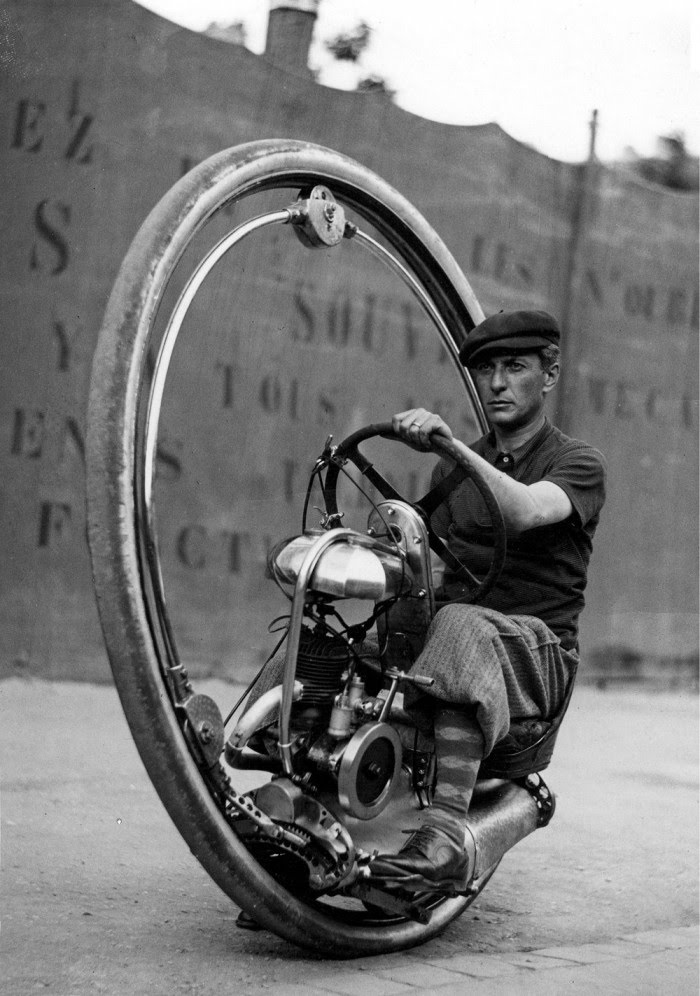 These have almost all been posted here before, seperately. I found more about them, and thought this could be a really cool informative and thourough post about the motor wheel. 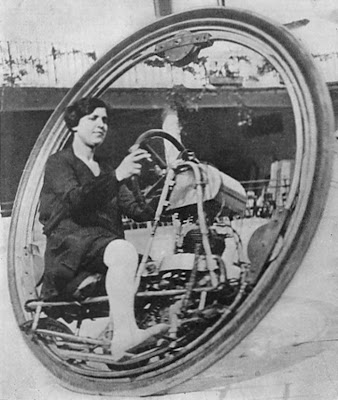 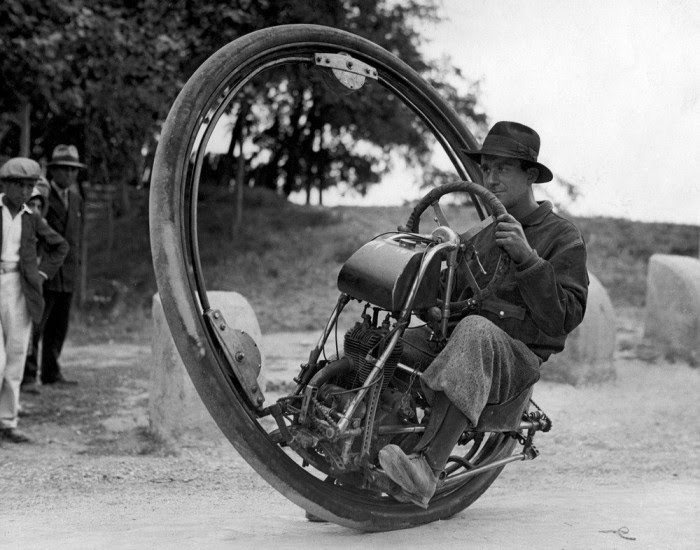 early 1960's
photo from http://www.fengtastic.com/?p=895
A full description of Charles Taylor and his lifelong one wheel development ideas: http://thenewcaferacersociety.blogspot.com/2008/05/charles-f-taylors-one-wheel-vehicles.html The vehicle was patented by him in 1964 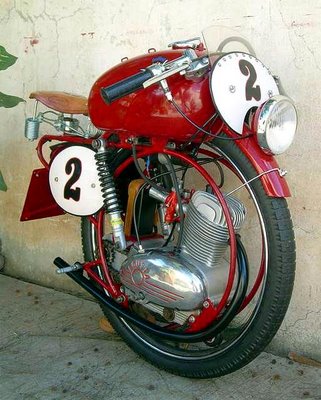 “This MV Agusta 60cc Monomoto Superleggera ( monowheel )is the experimental machine ridden by young wealthy Italian Luiggi Bandini, during practice for the 1954 Milano-Taranto Road Race. Bandini tragically lost control in a misty mountain section, while waving to a pretty spectator. His grief stricken father, Count Enzio Bandini, “The Falcon,” never again permitted anyone to ride or even view this advanced design, and knowledge of its whereabouts faded. Eventually, rumors of this fascinating machine reached the motorcycling bon vivant Todd Fell. On a trip to Naples, Italy, his quest to find it was rewarded at the Bandini country villa, where in 2004, fifty years after the tragic accident, the late Count’s family was persuaded to part with the treasure.” 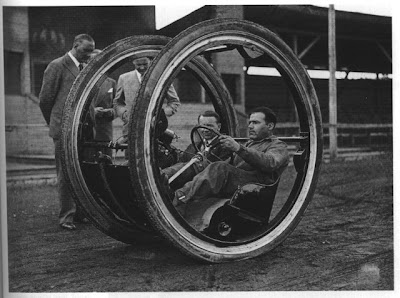 1947 The Vereycken Diwheel 1947 and you can read more about it http://douglas-self.com/MUSEUM/TRANSPORT/diwheel/diwheel.htm 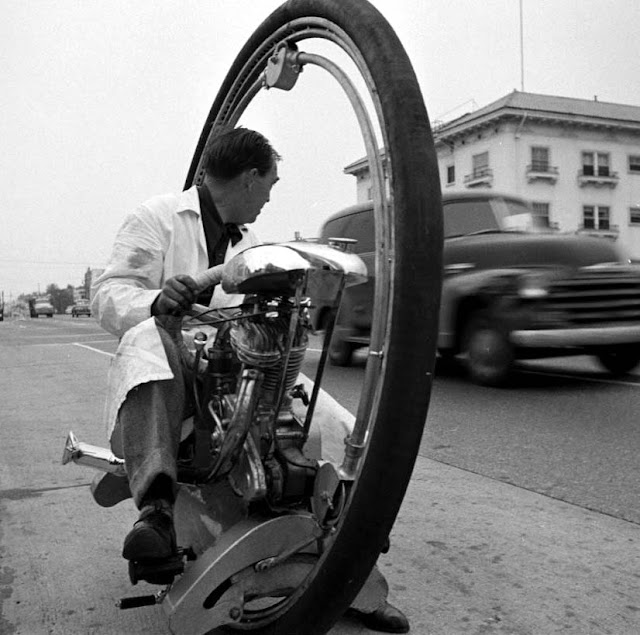 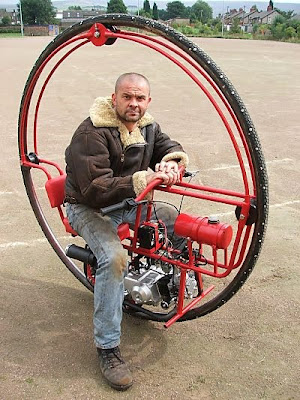 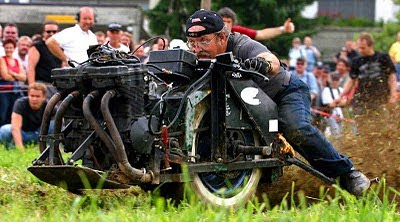 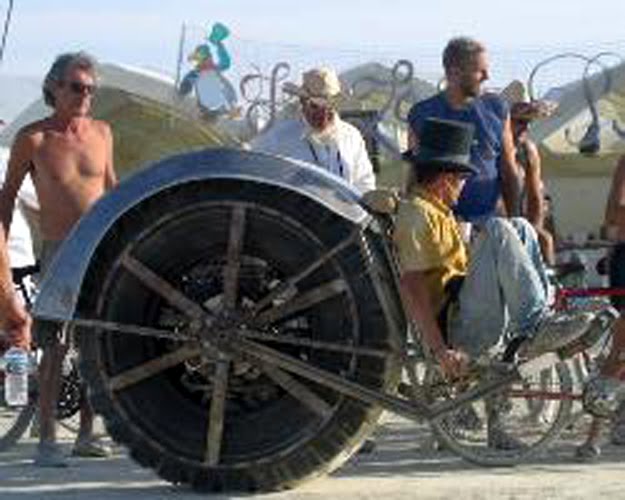 The R.I.O.T. wheel, burning man mid 2000's Above Jake Lyall's RIOT wheel at the 2003 Burning Man Festival.
This chunky 1100-pound machine is Jake Lyall's RIOT (Re-Invention Of The) wheel. Lyall's monowheel is unusual because it does not use the rider's weight to provide the reaction to the engine's thrust on the wheel. Instead the rider is outside, and the reaction is given by a lead-weighted Honda 80cc 4-stroke scooter engine suspended from a central shaft, driving through a sprocket attached to the wheel spokes. A separate 450-pound counterweight keeps the rider hovering above the ground at the front. Steering is done partly by precessing a 65-pound gyroscope to give yaw, and partly by the rider shifting his weight.

read about, and check out the cut away drawings of it http://douglas-self.com/MUSEUM/TRANSPORT/motorwhl/motorwhl5.htm 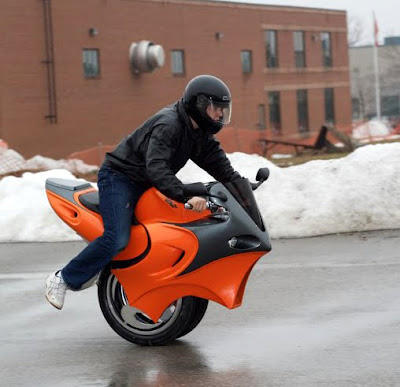 2007
18 years-old named Ben J. Poss Gulak has created the "One", a motorcycle that uses exactly the same principle as the Segway to work. It has two wheels, except that unlike other bikes that have online, the Uno's are in parallel. To speed the rider leans forward and slow down, back. http://autozine.com.br/diversos/uno-a-motocicleta-de-rodas-paralelas 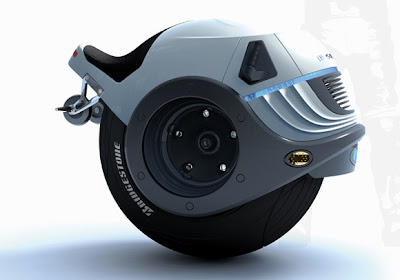 The Hornet is a concept motorcycle on one wheel created by designer Liam Ferguson. Using a fuel cell of six stages to run on hydrogen made from neodymium-iron that drives two motors of 74 horsepower causing the Hornet to reach 235 km / h. As with bicycles for children, it also has two wheels that support when the bike is stopped. Once the rider accelerates, it leans forward and these wheels are no longer required. A gyroscope calculates the center of gravity of the bike and balances, thus preventing its rider to fall. http://autozine.com.br/motos/hornet-a-motocicleta-do-futuro#more-4159
For a thorough look at all the monowheels, see http://douglas-self.com/MUSEUM/TRANSPORT/motorwhl/motorwhl.htm
at Saturday, January 22, 2011