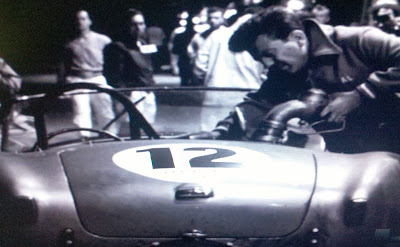 under the numbers on the 1964 AC Cobras, these letters were put on by Shelby's employees at the LA plant.
They stand for "Next Year Ferrari's Ass Is Mine" http://nyfaim.com/

This was something Shelby said in a phone conversation in response to the dirty trick that Enzo pulled when in a losing situation that had the Ferrari team losing the Manufacturers trophy because the Cobra's so scared Enzo Ferrari that he had to get the 1964 Monza race cancelled just so Ferrari could retain the points lead and win the manufacturers championship.
Monza race to a non points race, effectively preventling the Ferrari team from losing the slim lead, and keeping the trophy for the last in a long series of wins... but pissing off Carroll and the Shelby team so much that every Cobra was tagged with NYFAIM, and it so it was to pass that History was made, the Cobras kicked the Ferraris to the curb in '65.
The April 2009 issue of Automobile Magazine had a quote by David E. Davis, Jr. stating that he was sitting across from Shelby when that NYFAIM statement was made
http://www.automobilemag.com/features/columns/0410_carroll_shelby_le_mans/index.html
at Monday, July 19, 2010