Frank Lloyd Wright, genius celebrated architect, was bankrupt in the late 1920s, yet he still had so much ego, he had to buy a L 29 Cord, to fit in with the social elite such as Edgar Rice Burroughs, and the Marx brothers in the midst of the 1929 stock market crash

Above, photographed from a distance so great, I cropped off the bottom of the photo 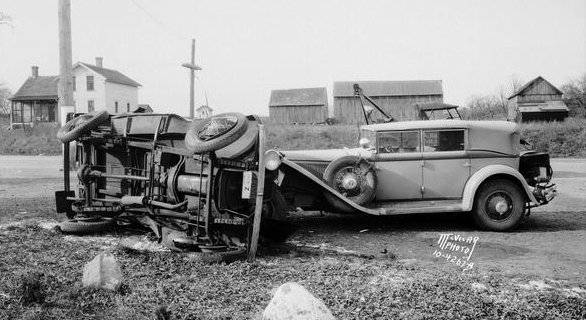 Few people would have known he had a top tier Cord, if he hadn't crashed one into the florist competition of the local newspaper's photographer's family.

Maybe he was photographing this rural crash because of the expensive Cord, or maybe it was to get the word out that the competition was going to be unable to deliver flowers for a while, and therefore go to his family for business... or maybe it was because the architect had an achilles heel when it came to safe driving, due to an overabundance of ego that maybe caused FLW to think people would not possibly cause him inconvenience.

Where do I get the idea he was a wonk? From his response to someone who pointed out "Why dear, you went through a red light!"
"My dear," Wright responded, "For me, the lights are always green." 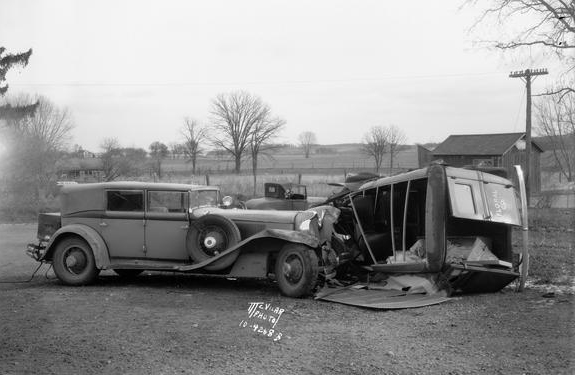 Which ever it was, the photographer get the word out to the small Wisconsin newspaper, which spread the word to the Chicago news, and the weekly news paper in Oregon of all places, picked it up for their once a week paper.

FLW was requested by the Cord company, in December, to reply with a description of how he was satisfied with his L29.

He crashed it in both September and November of 1933.

How did he pay for the new Cord L29 Phaeton? Well, he didn't even put the title in his name, as to prevent his many creditors from getting a judge to turn it over to them for payment of debts.

While most new Cord owners simply wrote personal checks for their cars, the situation was quite different for Wright. Technically he had no personal funds, having turned over all of his financial affairs to a rescue corporation called Wright Incorporated.

When established in 1927, the idea was that Wright’s friends, family members, and clients would each contribute $7,500 to the corporation. The resulting funds would be used to settle Wright’s old debts, pay alimony to his second wife, Miriam Noel Wright, and prevent the bank from assuming control of Taliesin and his other assets.

In return, the contributors were to be compensated from Wright’s future earnings, which he would to turn over to the Corporation, which in turn would pay him a salary.

Unfortunately, the scheme did not work, primarily because Wright had attracted very few paying clients and his expenses continued to accumulate. By the fall of 1928 the Corporation was able to reclaim Taliesin, enabling Wright and his new wife, Olgivanna, to return there, but its resources were nearly exhausted, despite the efforts of the young Madison attorney responsible for overseeing the thankless endeavor.

Had Wright’s two major late-1920s commissions gone forward, paying for the Cord probably would not have been a problem. But given the financial uncertainty that followed the stock market crash in late October 1929—just when Wright purchased the Cord-- neither his St. Marks client in New York nor his San Marcos client in Arizona could assemble enough investors to proceed. Consequently, coming up with payments on the Cord became more and more difficult. With Morgan’s name on the purchase agreement, Morgan was obligated to find the money, and, in frequent letters to Wright complained of the excessive strain the Cord was causing on his own finances. Over the years Wright had amassed a large and valuable collection of antique Japanese prints.

Using Japanese prints as collateral for loans or to raise funds was not at all unusual for Wright. In 1926 he placed over 5,000 prints in the vaults of the Bank of Wisconsin as collateral for money owed on Taliesin, and in 1928 Prof. Edward Burr Van Vleck, a UW professor of mathematics, secured a large number of them from the bank for $4,000, or about $1.00 a print.

By 1932 Wright and Morgan were still struggling to pay for the Cord, but they could now rely on a new source of funds: tuition payments from prospective Taliesin apprentices.

Evanston High School was one of numerous high schools in the Midwest where Morgan made presentations promoting Wright’s new Taliesin Fellowship program for aspiring architects. After completing one of his talks—which according to Howe began and ended with Morgan doing cartwheels onto and off the stage—Wright’s colleague would review the work of talented students, encourage those he approved of to join the Fellowship, and whenever possible collect down-payment tuition checks. However, instead of routinely sending the checks to Taliesin, Wright sometimes instructed Morgan to apply the checks toward the Cord. Neither Howe nor any of the other young apprentices were aware that some of their tuition fees were paying for Wright’s car rather than compensating Irving Frautschi’s furniture store for mattresses or paying other Madison businesses that were providing services and materials to the Fellowship.

In the mid-1950s Frank Lloyd Wright acquired a second Cord, a Model L-29 Cabriolet, the two-door, sports car version of his old four-door Phaeton. this time he was flush with cash and contracts to cover all his expenses