Google book preview  has the first 25 pages or so, but that barely touches the meat of the material, so, don't get any hopes that it's a shortcut to seeing what the book is about.

Instead, think about all the new car test drives you've ever read about, as that's what this really is, when you cut through the smoke and mirrors of it appearing to be a book.

It's a summation of about 14 years of the authors transcripts from when he did test drives for a magazine, and press junkets, etc. Back in the 60s he put all the info in a magazine, and now he's boiled down those car reviews and test drive articles into a coffee table book.

It's a loaded book, 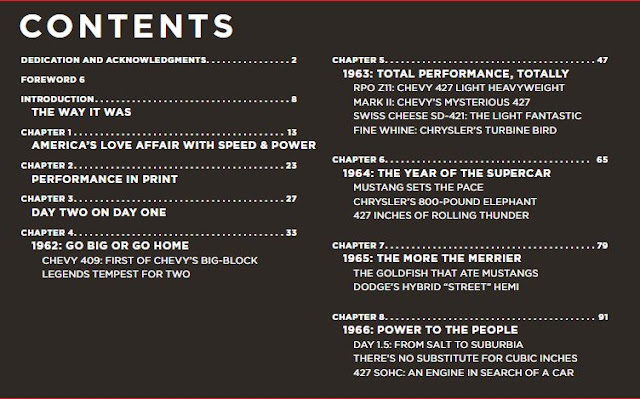 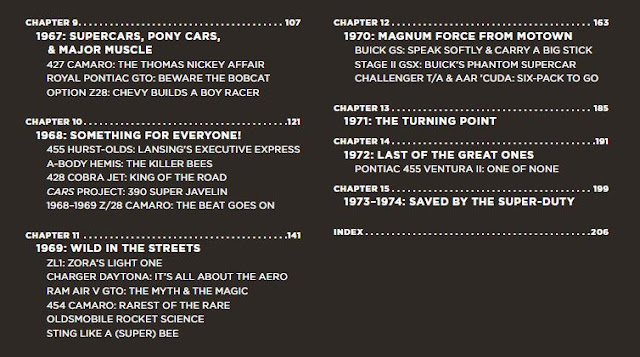 Not every one, but nearly all of them. And this is from the guy who did the test drives, a lot of which were drag strip tests, which is impressive, and it has a lot of great photos, and even a damn good look at the concept and prototype cars from Pontiac, Chevrolet, GM, Ford, Buick, etc.

Again, not every single one, but most of them. The SC/Rambler isn't in this book, as that wasn't something he test drove back in the 60s, neither were Cadillacs, Lincolns, Avanti, etc.

The Author did test drive an enviable list of cars, and wow, he was tight with Baldwin Motion too, and rarely was wasting any time with unimpressive cars.

There is a lot of info in this book, and it's nearly all first hand from the test drive point of view, and what was done to make the cars perform a bit better, for more fun at the track, and better numbers, closer to the promises made by the manufacturers on Hp and ET.

Which is to say, it's dry. Unlike the barnfind books which are story after story of thrills or treasures found, this doesn't have the colorful stories. And much of the content is the same as the author has already used in his other books,  Ford Total Performance: Ford's Legendary High-Performance Street and Race Cars

It's right on the nose at 200 pages, and a hell of a lot of photos that are tied into the narrative on the page, and about half the photos are colored, or black and white. Some are at the drag strip for initial reports on the performance, and some are the press release publicity shots.

It's rare to read a book that is from the magazine people who abused the press corps test cars, but who also were in the small circle of insiders that knew how race parts were developed by the big three despite the AMA ban, and used to support the racers... among the other "in the know" stuff that the general public was unaware, like programs and development goals (ever heard of the LS7?) and was there for testing preproduction cars that never resulted in production.

The close ties to the super car makers, Baldwin Motion, Nickey Chevrolet, Royal Pontiac, and Yenko... and the focus of the author on the high perf parts, codes, options, Hi Po car models, plans and fails, this is priceless and rare stuff. This really is the reason to get this book and soak up all the rare knowledge.

I'd say it's obvious that the author was smitten with Pontiacs most of all, and the GTO specifically, and wasn't very impressed with Fords and less with Mopars which he didn't learn much about aside from the hemi (ex Stage 2 or 3 413). A lot of the content of the book deals with the comparative details of the difference between the Pontiac and Oldsmobile muscle cars, very little with Plymouth or Mercury. But that's just what I'd expect of a magazine article writer or editor in the 60s. They were driven by hype and publicity I suppose, not playing favorites with the highest dyno numbers.

Now that I've covered the facts, I'll get to the opinion:
The first thing I noticed was the bad choice in colors for the cover, an olive green, light red, and blue. I can't guess why, but I hope no one ever repeats it.
Then I decided that whatever editor or proofreader had let those ugly colors pass by unremarked, had also not noticed the mistakes and errors in the book. That's annoying.

Things I learned:
Export kits in the 50s and 60s from Buick were disguised hi po parts kits for a 10% hp bump
The Ford board chairman who told the AMA to that Ford was going to ignore the ban, was also the president of the AMA
The humor editor hired by Hi Performance Cars magazine, was a great writer that knew how to have fun, and did a test drive of a Maine lobster boat, a scale Can Am McLaren bed (built by Bruce Meyers), and in 1970, took a dump truck to the drag strip. The 768 cu in Cummings and 16 speed trans put the garbage truck down the 1320 in 43.88 seconds, at 61 mph, shifted every 43 feet.
Briggs Cunningham took delivery of a 1962 Pontiac Grand Prix, then immediately had a super charger bolted on
The super stock 1963 Z11 Impala... never heard of that before!
Ford bought a 1963 Z11 Super Stock Impala, and was race testing it at Dearborn Proving Ground
The dealership Bob Ford Inc, in Dearborn, was owned by Henry's nephew. The name changed to Fairlane Ford in the 80s, it's on the corner of Chase Rd and Michigan Ave 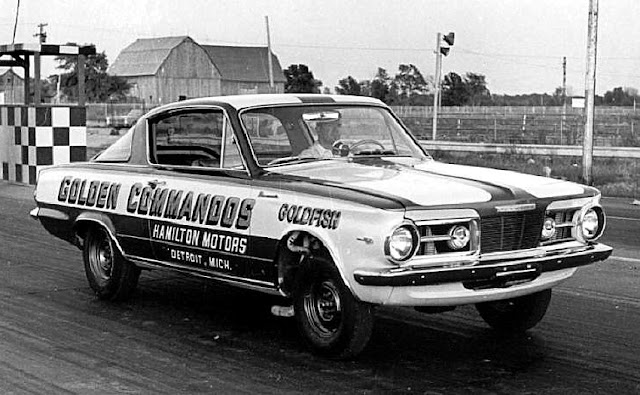 The Mopar Golden Commando's raced a 1965 Barracuda, named it the Goldfish, it was literally sent to pasture with 325 miles on it, all dragstrip. It was found in 1999, and restored 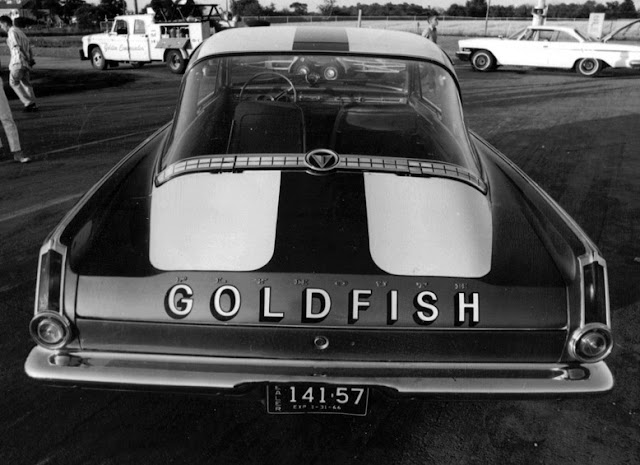 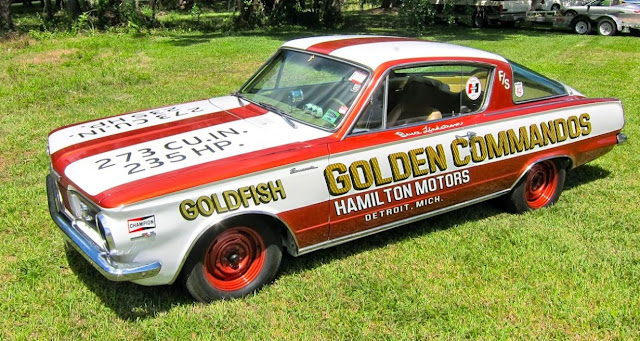 Astronaut Gordon Cooper, had a 1966 427 SOHC Galaxie (of course, no pun intended)
Cooper told a kid that 7 were made like that for the 7 astronauts  https://www.jalopyjournal.com/forum/threads/ford-427-sohc-engines.761572/page-8 which was verified by Bill Holbrook
2 people bought 1967 GT 500 Shelby Mustangs with the 427, it was 45% more expensive than a 428 engined identical GT 500, however, what I was told by John, who owns one, http://justacarguy.blogspot.com/2008/02/67-shelby-gt-500-cobra-mustang-one-of.html was that about 40 were made, and they used up the 427 engines, then made them with 428s
The dealer plate for Nickey was 4501, because the street number for the dealership was 4501 Irving Park Road, Chicago
For a super tune, Motion would install metal core Packard 535 spark plug wires, with Rajah bakelite plug clips
The 67 Z28 302 was made from 64-65 Corvette cam and valvetrain parts, and topped with a 800cfm Holley double pumper
The AMC 390 heads used 202/160 valves, so, replacing them with the Corvette swirl polished, hard chromed, light weight valves reduces the weight of the valvetrain by 15 ounces, and.... increases the red line by 750 to 1000 free rpm
Legend Larry Shinoda designed the ZL2 Camaro hood, and the Boss 302 branding and graphics. Damn, he was on 2 fronts (or more) of the pony car wars
A base 1969 Camaro cost 2700, a ZL1 cost 7350
7 ZL1 engines were sent to St Louis for Corvette installations (why not Bowling Green?) but only 2 were put in. 5 were quarantined, and never returned. I bet they disappeared.
One 69 Camaro was built with the LS7 454, at Baldwin Motion, sold to Ray Dotterer
I've never heard of a Kendig carb, but Dyno Don used them on his pro stock Ford
Olds had a Stage II 455 powering a GSX into the 11s, it couldn't make the vacuum needed to run power brakes. So, it never went into production cars
Olds experimented with a hemi, the 4 cam OW 43, it made 700hp 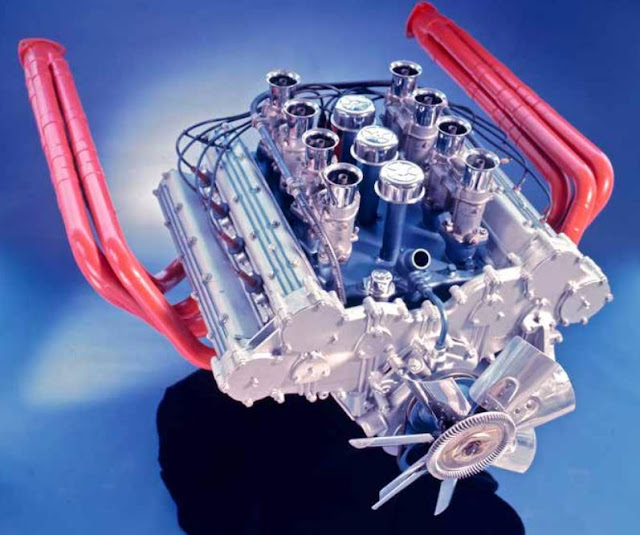