Walter Cronkite, from race car driver to boat racing... it only took driving a Triumph into Lake Ocoee to get him to switch from racing cars to racing boats. 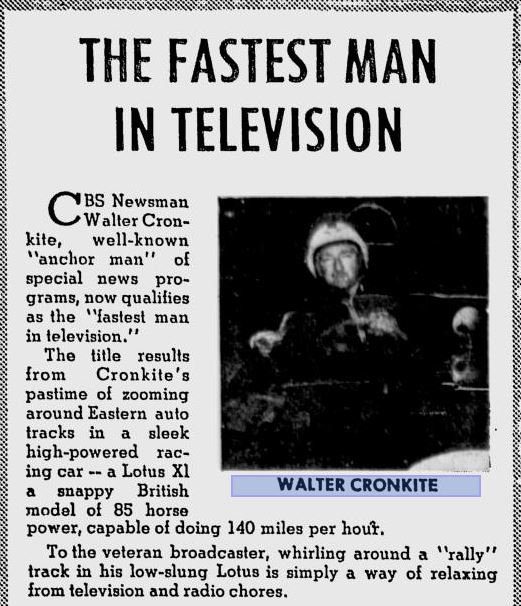 "And Walter liked to drive fast," Bob Schieffer, one of Cronkite's CBS colleagues, noted on TV with a chuckle. Fast cars came before fast boats with Walter. He turned to sailing after a collision between a TR3 and a lake raised questions from his wife, Betsy, from CBS and from Walter himself.

Some chronology: On impulse, Walter bought an Austin Healey that he spotted in a New York showroom. The racing bug bit at Lime Rock on its 1957 opening day. After a track-driving school, he bought a Lotus 11 Club, which he raced when and where he could. 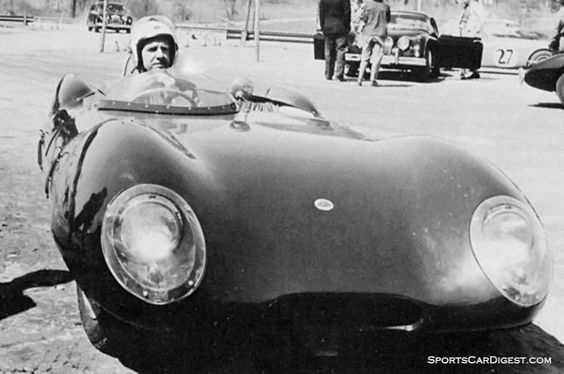 Recruited by Art Riley for his Volvo team for Little Le Mans, a marathon race at Lime Rock, Walter did well in the PV544.
http://justacarguy.blogspot.com/2016/01/walter-cronkite-1962-at-lime-rock-and.html
He was not a celebrity toying with a hobby. He liked the feel of a well-taken corner. He was a good, capable driver, never pretending to more. Trophies rewarded his approach.

New York City harbored special car spots that Walter frequented. At Sardi's were monthly gatherings of the Madison Avenue Sports Car Driving and Chowder Society. At Le Chanteclair, French champion René Dreyfus and his brother Maurice daily hosted every racing personage in the world who set foot in Manhattan. Art Peck, a CBS radio exec, was cofounder of the Chowderheads and moonlighted as a track announcer. Walter teamed with him for several years to cover Sebring for CBS radio. 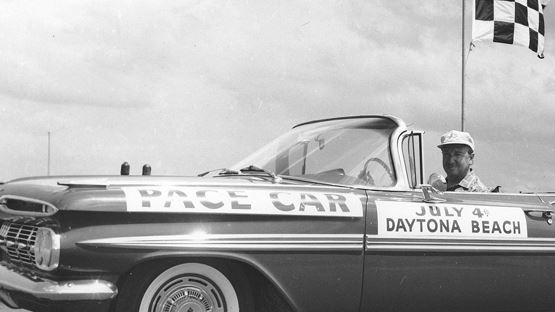 At the 1959 Sebring--famous for the biblical deluge in late afternoon ("the Grand Prix of Venice," said Art)--Walter was both on-air talent and a driver. His car was a little (1,090-cc) red Lancia Appia Zagato. When coverage broke for the Metropolitan Opera broadcast, Walter dashed down to helm the Lancia. "I passed Stirling Moss," he boasted. "Of course, he was walking back toward the pits at the time." Walter finished 40th.

That October, Walter and I were on the four-car Triumph team (TR3s) entered in the American International Rally. Cars from eight starting points headed for Las Vegas. Triumph's start was from Sardi's. My navigator was Eleanor Halmi; her photographer husband, Bob (Hollywood mogul-to-be), drove another car. Walter's navigator was Stu Blodgett. On the second leg, in fog, rain and darkness on Route 64 southeast of Benton, Tenn., Walter put the Triumph off the highway into Ocoee Lake after it rolled twice.

The Times-Union: When you signed your contract with CBS some 20 years ago, did you actually dash out across the street and buy an Austin Healey 3000?

Walter Cronkite: Well, that’s a distorted version of a true story – not when I signed my CBS contract and not an Austin Healey 3000.

When I was already working for CBS, I had a business manager there primarily to see that I didn’t spend all my money, which wasn’t very great in those days, but all my checks went to him.

It came to me by accident instead of going to my business manager. So I had this check in my hot hands, and I did rush out and buy a used sports car, which I had always wanted – an Austin Healey – but it was an old Austin Healey, the first Austin Healey four-cylinder before the six came out, and before the 3000. It was two generations removed from the 3000.

From the Forties, when TV news was born, CBS has nearly always spent more money, hired more (and better) people, given them freer (comparative) rein, and taken greater (relative) risks on its news operation than either of the other networks. CBS has gotten most of the credit for the major innovations in TV news (e.g., documentaries, live coverage, stand-up remotes, etc.), and all have been effected by one of two people: Murrow or Cronkite.

The day he retired, network news departments got turned over to the network advertising and marketing departments. I don't think we've had a day of honest news reporting since then.

Name me one person, anybody, who could be called the most trusted man in America now. I can’t think of one either. 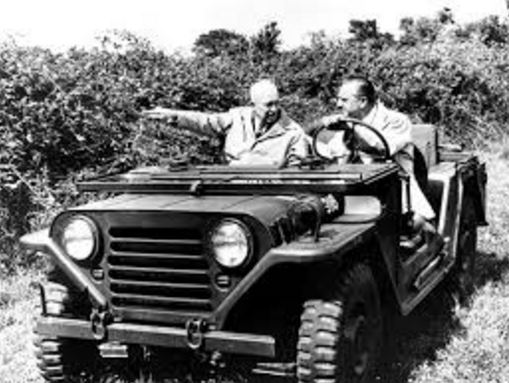 Cronkite joined Ike for a tour of the Normandy beaches, on the 20th anniversary of D-Day.
As a war correspondent in WWII, he was on a warship during the invasion of North Africa, flew on a B-17 during a bombing raid over Germany, landed in a glider with the 101st Airborne during Operation Market Garden, and was with General Patton’s troops during the Battle of the Bulge.
https://www.roadandtrack.com/car-culture/a34906773/walter-cronkite-racing
at Monday, March 07, 2016